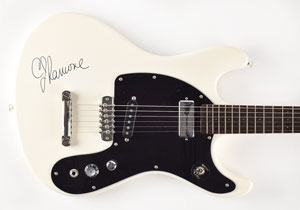 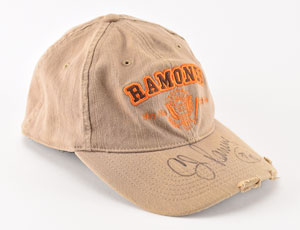 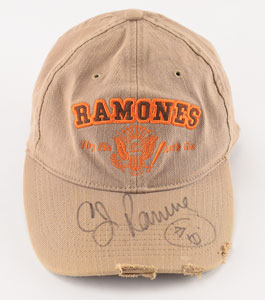 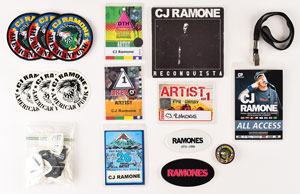 Included with the guitar: a beige fitted baseball cap with orange embroidered Ramones logo and presidential seal, signed on the brim in black felt tip by CJ Ramone, who adds a face sketch; a large group of 50 black and white CJ Ramone guitar and bass picks, with one "Ramones" pick; three patches, three stickers, and one pin featuring the "CJ Ramone, American Punk" logo; five backstage and all-access passes issued to "CJ Ramone"; a pair of "Ramones" stickers; and an unopened CD for CJ Ramone's debut solo album, Reconquista. In fine condition. Accompanied by a Mosrite hardshell carrying case. From the collection of Ramones head of security and driver Gene Frawley.

About this guitar, CJ writes: "On February 18, 2010, I did a show in Tokyo, Japan, with my band. After the show was over, I was informed that my Mosrite CJ Ramone Model Prototype Bass #CJ000 was stolen from the venue. Having more shows to complete, we needed to arrange a bass for me to use for the rest of the tour.

Mr. Yusa presented me with a Mosrite Silver Sparkle Deluxe Bass to replace the stolen prototype so the tour could continue. I was also presented with this White Mark II Deluxe Model Guitar Serial #BD 019. This guitar has been in my collection since and has been used on the Mosrite Rebirth CD, Reconquista and Last Chance to Dance."