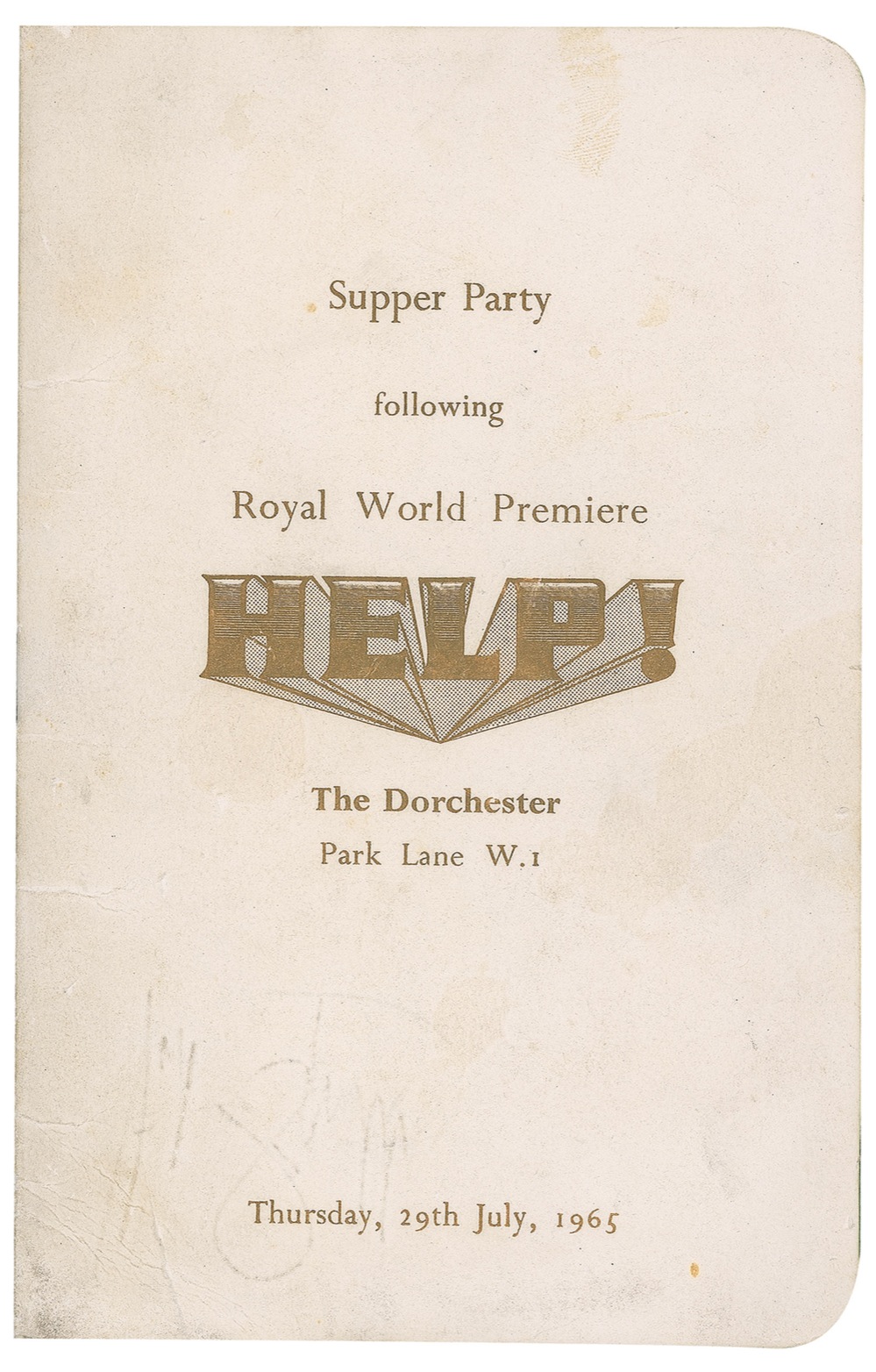 Original 4.5 x 7 menu for the supper party following the Royal World Premiere of Help!, held at the Dorchester Hotel on Thursday, July 29th, 1965. Boldly signed in pencil on the reverse of one of the two inside pages, “Best wishes Ringo Starr,” “John Lennon,” “Paul McCartney,” and “George Harrison.” Menu is also signed on the inside front cover by co-star Victor Spinetti. In very good to fine condition, with expected light soiling to signed page, soiling and toning to covers, with impressions of Spinetti’s signature on the front cover, and light creasing along hinge. Accompanied by a letter of authenticity from noted Beatles expert Frank Caiazzo, who states, “This menu was undoubtedly signed on the night of the party.”

The Beatles' second full-length feature film, Help!, had its royal premiere at the London Pavilion, Piccadilly Circus, London, where crowds began to gather at 8:00 a.m., and by evening ten thousand fans were gathered outside to see Paul, George and Ringo arrive in a black Rolls-Royce; John’s Rolls-Royce delayed twenty minutes because of the crowd surge. Inside the Pavilion the band met Princess Margaret and Lord Snowdon, who had held off their summer holiday for the event. After the screening, The Beatles appeared at the supper party at the Orchid Room of the Dorchester Hotel attended by most of the film’s principals, including director Richard Lester, and co-stars Eleanor Bron, Victor Spinetti, Leo McKern, and Roy Kinnear. The movie was a box-office success with overall good reviews, but not up to the standard set by 1964’s A Hard Day’s Night. The soundtrack album and single release of ‘Help!’ topped the British and American record charts. The Beatles themselves, in later years admitted that their marijuana intake during location filming, particularly in the Bahamas and the Austrian Alps, made the shoot a bearable experience, but having to sandwich in the making of the film for nearly two months between tours and recording was a draining experience. Pre-certified Roger Epperson/REAL and RR Auction COA.