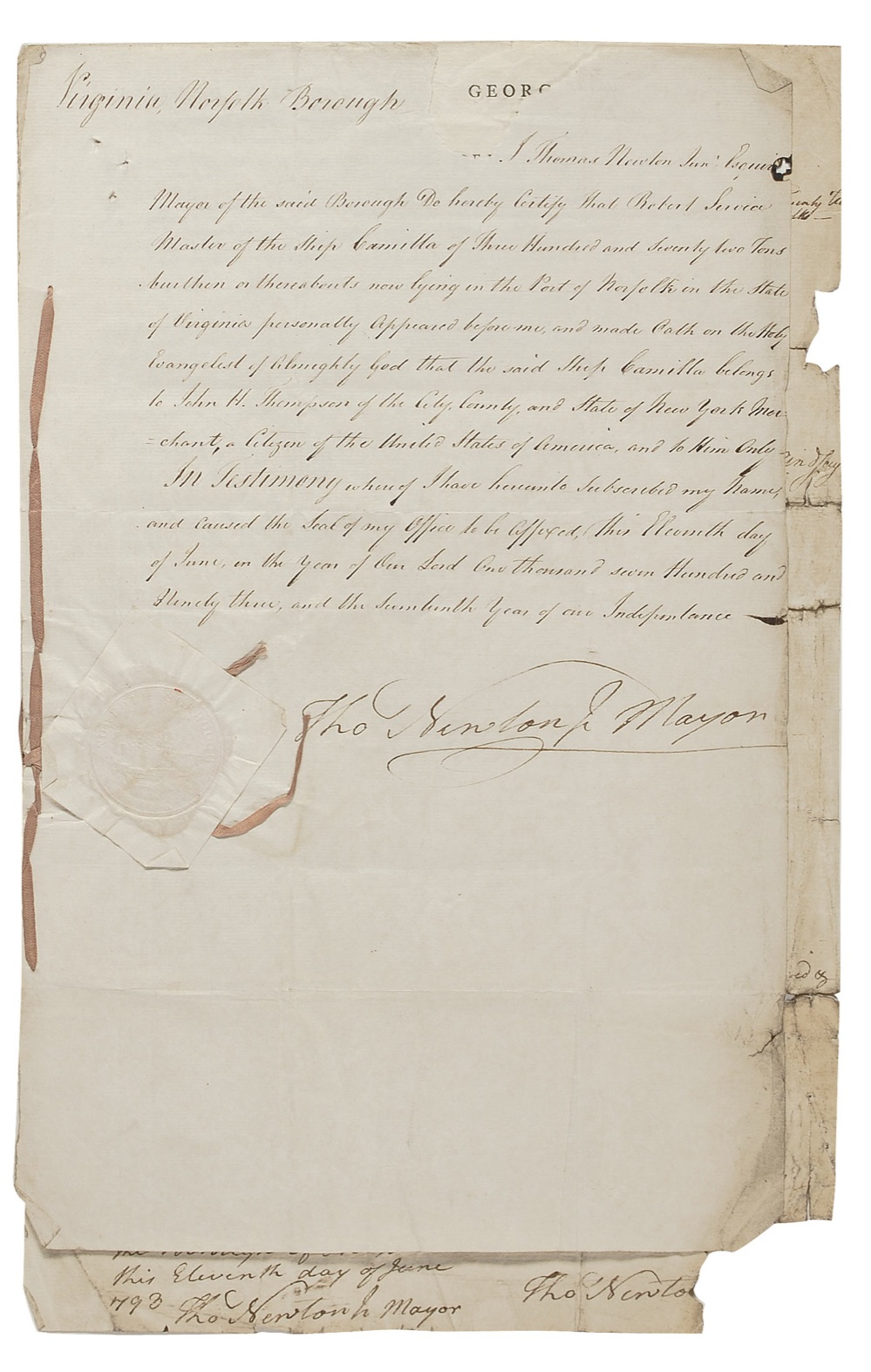 Scarce and desirable partly-printed double-signed DS, signed twice as president, “Go: Washington,” and twice “Th: Jefferson” as secretary of state, one page both sides, 10 x 15.5, June 11, 1793. Three language ship’s paper, with Dutch and English on one side, and English and French on the reverse, issued to “Robert Service, master and commander of the Ship called the Camilla of the town of New York…lying at present in the port and haven of Norfolk and bound for Falmouth and laden with Flour & Staves that after this Ship has been visited and before sailing he shall make oath before the proper officer, that the said Ship belongs to one or more of the citizens of the United States of America, the act whereof shall be put at the end of the presents; and likewise that he will keep and cause to be kept by his crew on board, the marine ordinances and regulations, and enter into the proper office a list signed and witnessed, containing the names and sirnames, the places of birth, and the abode of the crew of this Ship, and all who shall embark on board her.” Signed on each side, “Go: Washington,” and “Th: Jefferson.” Affixed to the document by its original ribbon is the oath of Norfolk mayor Thomas Newton attesting to the ship and its cargo. In generally very good condition, with paper loss and tears to edges, intersecting folds, scattered toning and soiling, several tack holes, and light creasing and wrinkling. One of the white wafer seals remains crisp and intact, with another one soiled and cracked, but mostly intact. All writing is bold and the signatures, particularly those on the front, are large and quite remarkable.

Astonishingly rare in such a multi-signed format, this early variant three-language ship’s paper was endorsed four separate times—twice each by President Washington and Secretary of State (and future president) Jefferson. The paper itself would have provided proof of the nationality of the ship's owner if the vessel, then anchored in Norfolk, Virginia, was stopped by a foreign power—an enormously important fact during this period as Washington proclaimed US neutrality between France and England. The page provides a double-pairing of the earliest presidential signatures! It is worth noting that this particular design was the first format used for ship’s papers and lasted less than a year until the standard four-language format was devised. Pre-certified John Reznikoff/PSA/DNA and RRAuction COA.