Anderson prepares to leave "for the N. W. Frontier" with General Winfield Scott 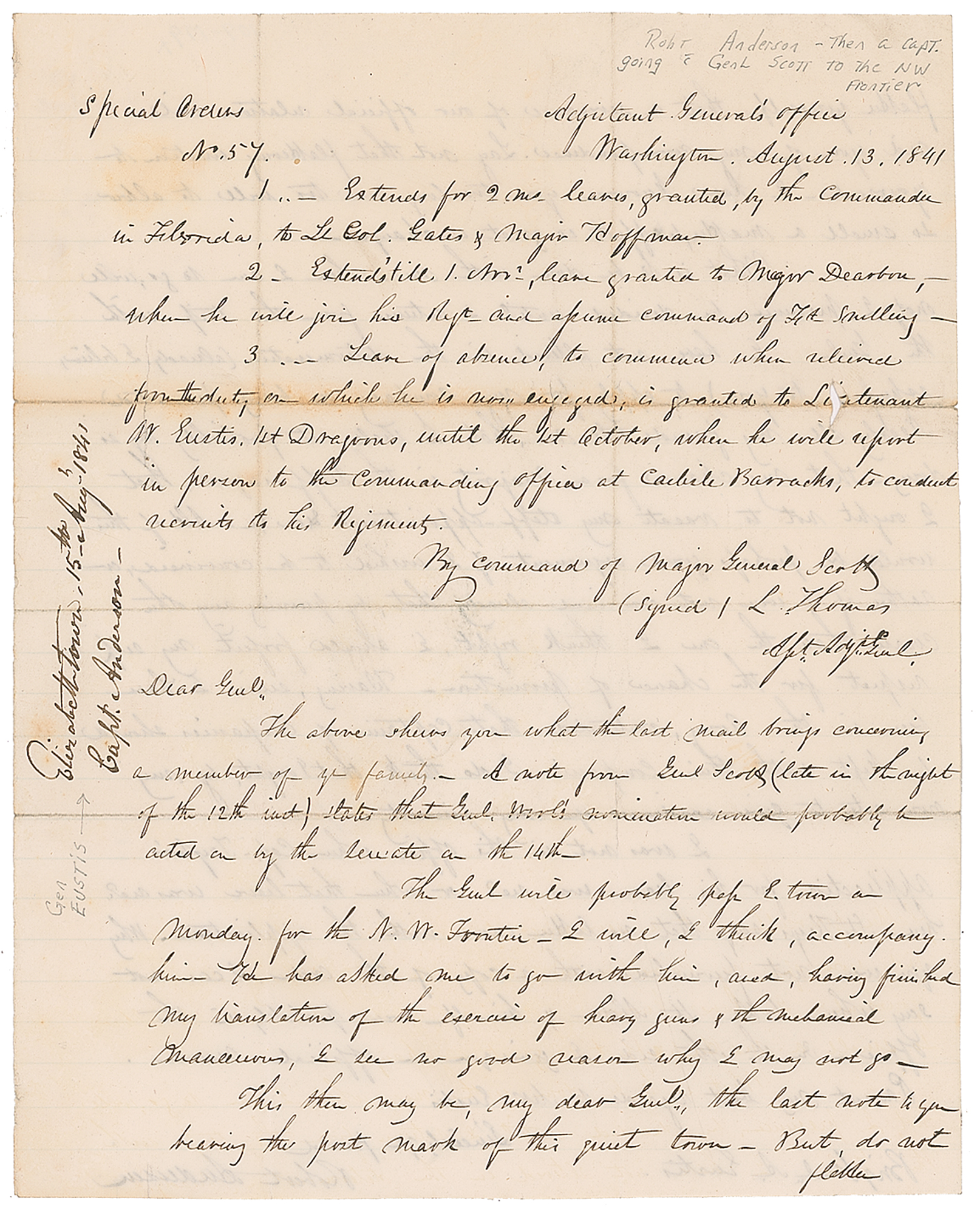 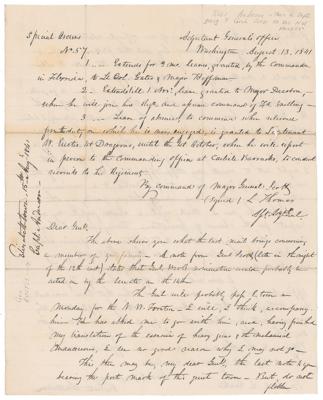 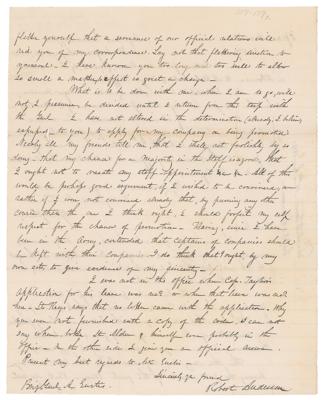 Anderson prepares to leave "for the N. W. Frontier" with General Winfield Scott

Union general (1805-1871) in command of Fort Sumter who refused a formal demand for his surrender, leading to the bombardment of the fort and start of the Civil War. Scarce ALS, one page both sides, 7.75 x 9.75, August 13, 1841. Written below a manuscript copy of a notice from Assistant Adjutant General L. Thomas issuing Special Orders No. 57, a letter to Brigadier General Abraham Eustis, informing him that he will accompany General Scott to the North West Frontier and discussing his prospects for promotion, as well as matters relating to other officers. In full: "The above shews you what the last mail brings concerning a member of yr family. A note from Genl. Scott (late in the night of the 12th inst) states that Genl. Wool's nomination would probably be acted on by the Senate on the 14th. The Genl. will probably pass E'town on Monday for the N. W. Frontier. I will, I think, accompany him. He has asked me to go with him, and, having finished my translation of the exercise of heavy guns & the mechanical maneuvers, I see no good reason why I may not go. This then may be, my dear Genl., the last note to you bearing the post mark of this quiet town—But, do not flatter yourself that a severance of our official relations will rid you of my correspondence. Lay not that flattering unction to yourself. I have known you too long and too well to allow so small a matter so great a change. What is to be done with me when I am to go; will not, I presume, be decided until I return from this trip with the Genl. I have not altered in the determination (already, I believe, expressed to you) to apply for my company on being promoted. Nearly all my friends tell me, that I shall act foolishly by so doing—that my chance for a Majority in the Staff is so good, that I ought not to vacate my staff-appointment etc etc. All of this would be perhaps good argument, if I wished to be convinced, or rather if I were not convinced already that, by pursuing any other course than the one I think right, I should forfeit my self respect for the chance of promotion. Having, since I have been in the Army, contended that Captains of companies should be kept with their companies. I do think that I ought, by my own acts, to give evidence of my sincerity. I was not in this office when Cap. Taylor's application for his leave was rec'd or when that leave was rec'd here. Lt. Keys says that no letter came with the application. Why you were not furnished with a copy of the order I can not say when, both Lt. Alden & himself were probably in the office. On the other side I give you an official answer. Present my best regards to Mrs. Eustis." In fine condition, with light toning along intersecting folds.