Roosevelt lobbies for trade unions in 1913: "Now here were young girls, many of them undeveloped children, toiling excessive hours each day, often in dark unsanitary conditions, generally for low wages" 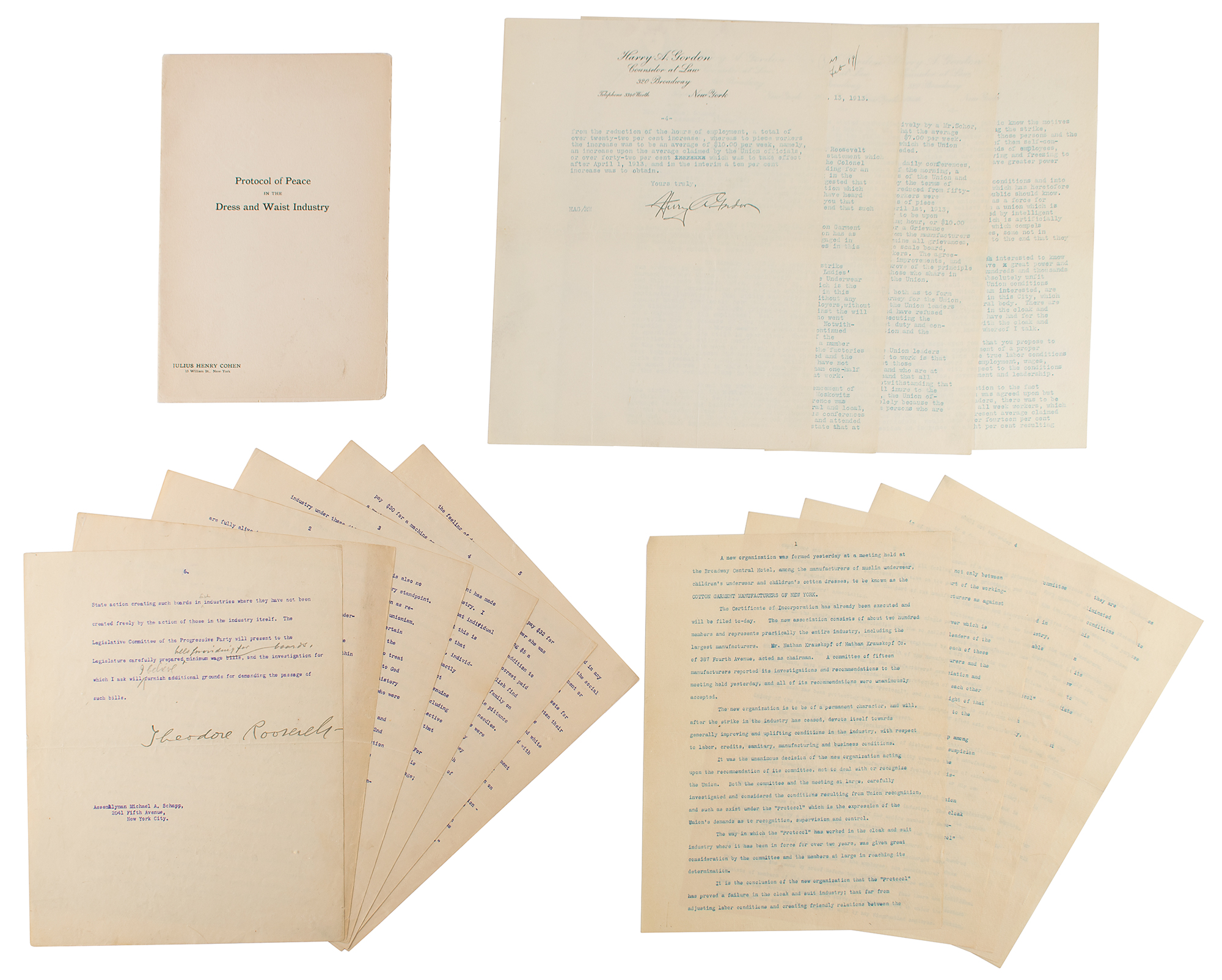 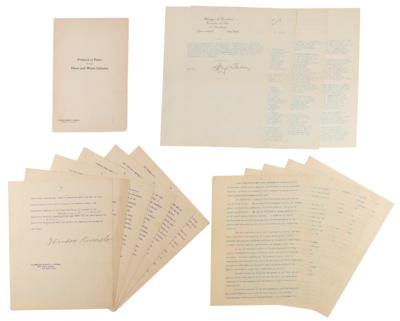 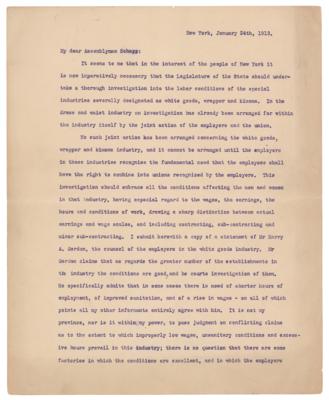 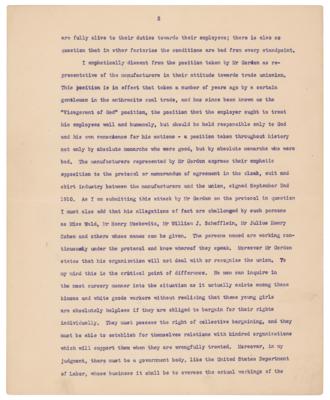 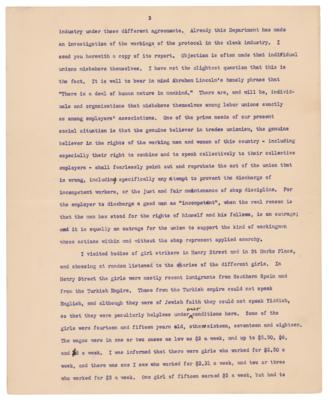 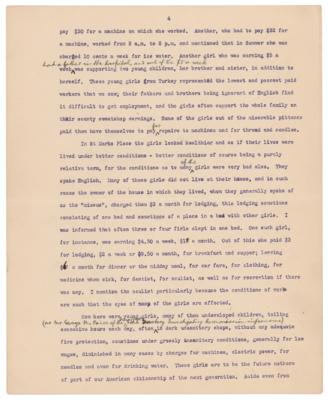 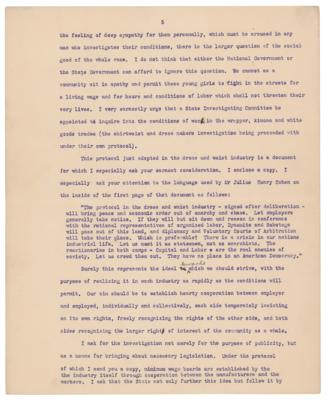 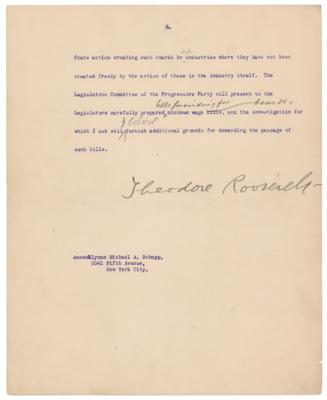 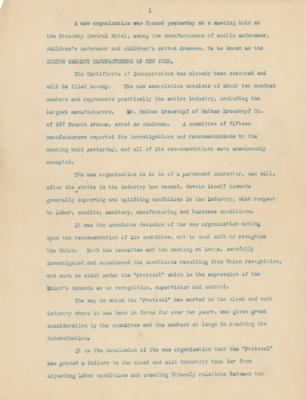 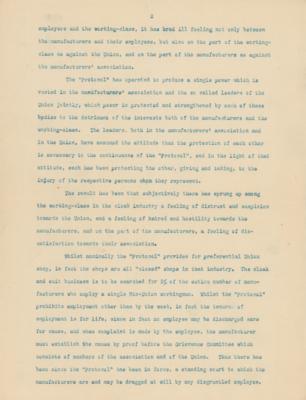 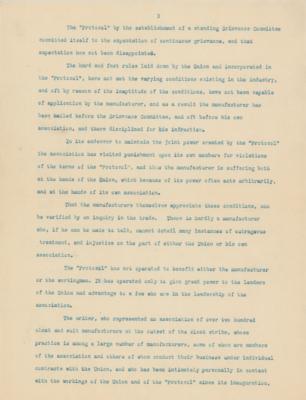 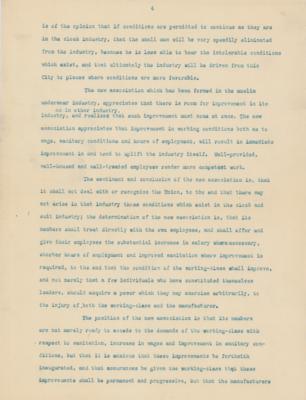 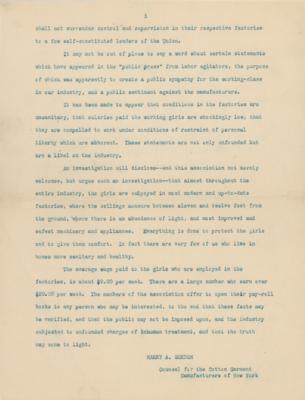 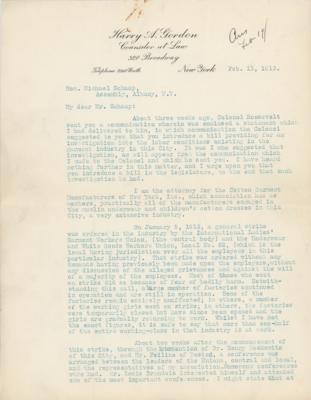 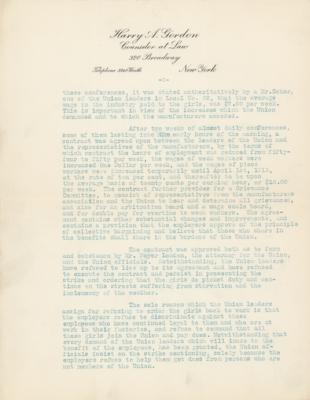 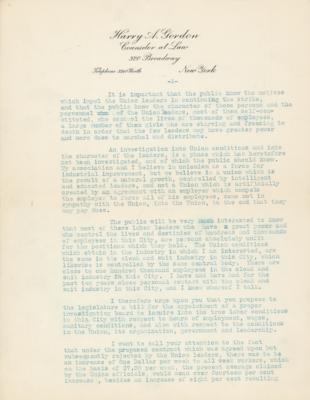 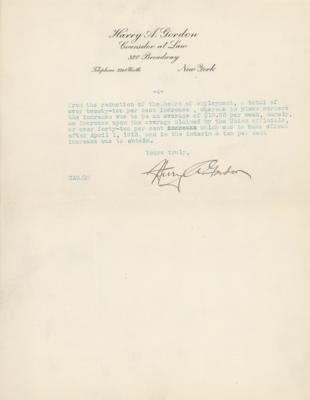 Roosevelt lobbies for trade unions in 1913: "Now here were young girls, many of them undeveloped children, toiling excessive hours each day, often in dark unsanitary conditions, generally for low wages"

TLS, six pages, 8.5 x 10.5, January 24, 1913. Lengthy letter to Assemblyman Michael A. Schapp in New York City, commenting on labor unions and the right to organize, with several annotations by Roosevelt. In part: "It seems to me that in the interest of the people of New York it is now imperatively necessary that the Legislature of the State should undertake a thorough investigation into the labor conditions of the special industries severally designated as white goods, wrapper and kimona. In the dress and waist industry an investigation has already been arranged for within the industry itself by the joint action of the employers and the union. No such joint action has been arranged concerning the white goods, wrapper and kimona industry, and it cannot be arranged until the employers in those industries recognise the fundamental need that the employees shall have the right to combine into unions recognized by employers…I submit herewith a copy of a statement of Mr. Harry A. Gordon, the counsel of the employers in the white goods industry…I emphatically dissent from the position taken by Mr. Gordon…No man can inquire in the most cursory manner into the situation as it actually exists among these kimona and white goods workers without realizing that these young girls are absolutely helpless if they are obliged to bargain for their rights individually. They must possess the right of collective bargaining, and they must be able to establish for themselves relations with kindred organizations which will support them when they are wrongfully treated…Objection is often made that individual unions misbehave themselves. I have not the slightest question that this is the fact. It is well to bear in mind Abraham Lincoln's. homely phrase that 'There is a great deal of human nature in mankind.' There are, and will be, individuals and organizations that misbehave themselves among labor unions exactly as among employers' associations."

He goes on to enumerate his firsthand observations of the poor wages and conditions of young women immigrants working in textile factories: "The girls often support the whole family on their scanty sweatshop earnings. Some of the girls out of the miserable pittance paid them have themselves to pay for repairs to machines and for thread and needles…Now here were young girls, many of them undeveloped children, toiling excessive hours each day, often in dark unsanitary conditions, generally for low wages, diminished in many cases by charges for machines, electric power, for needles and even for drinking water. These girls are to be the future mothers of part of our American citizenship of the next generation. Aside even from the feeling of deep sympathy for them personally, which must be aroused in any man who investigates their conditions, there is the larger question of the social good of the whole race…We cannot as a community sit in apathy and permit these young girls to fight in the streets for a living wage and for hours and conditions of labor which shall not threaten their very lives. I very earnestly urge that a State Investigating Committee be appointed to inquire into the conditions of work in the wrapper, kimona and white goods trades." In fine condition, with light edge toning to the first page. Accompanied by Harry A. Gordon's five-page typed statement referred to by Roosevelt, a four-page TLS from Gordon to Schapp explaining his position, and a booklet entitled 'Protocol of Peace in the Dress and Waist Industry.'