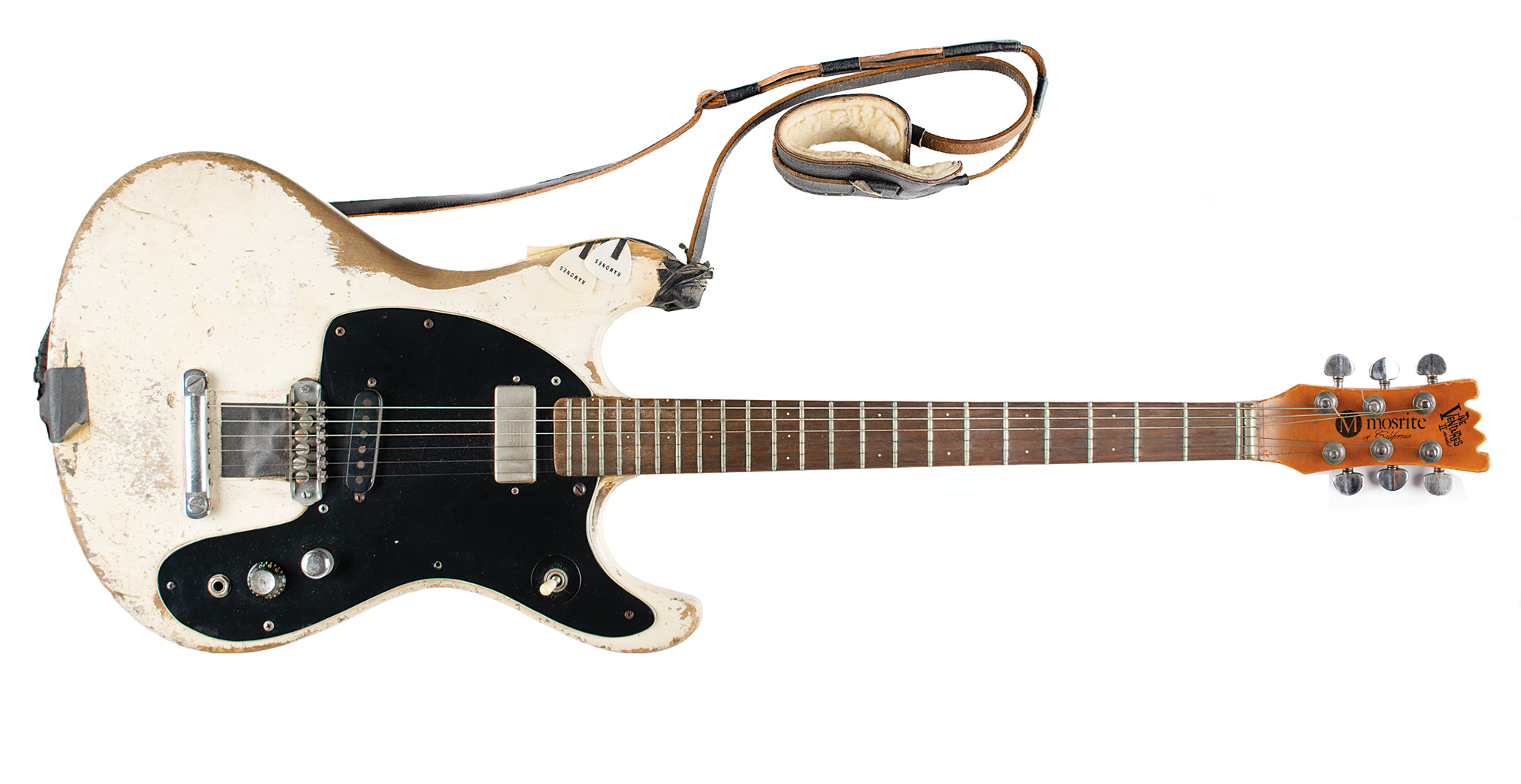 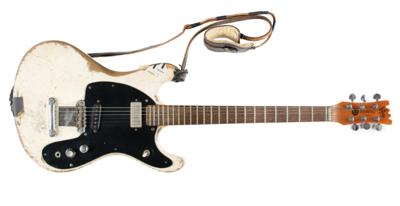 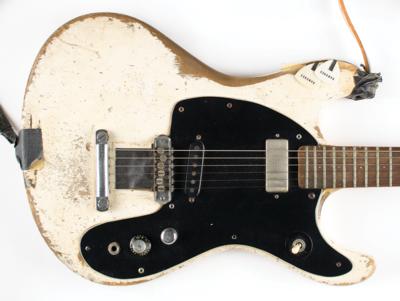 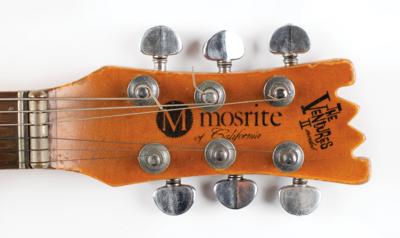 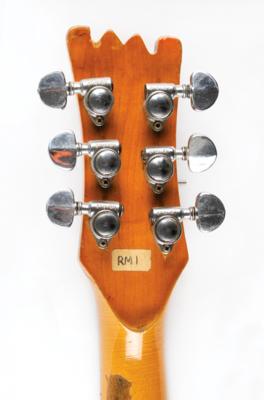 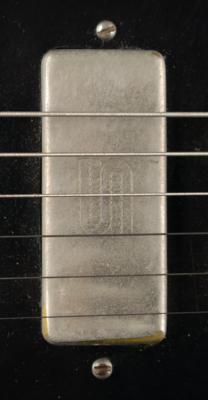 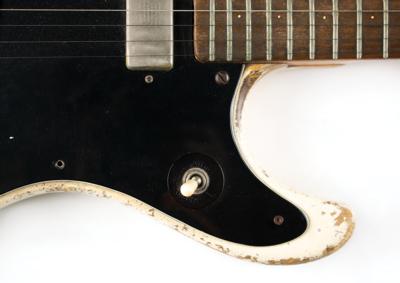 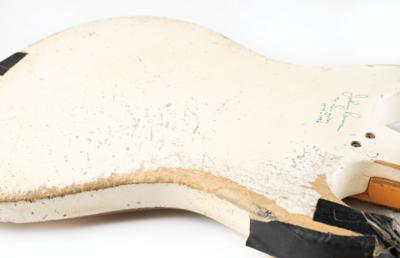 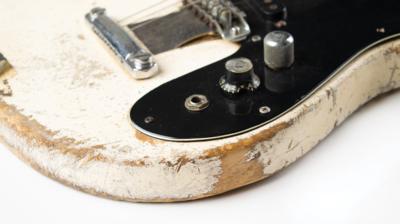 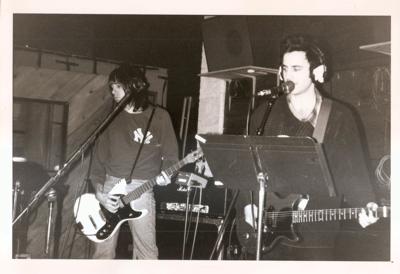 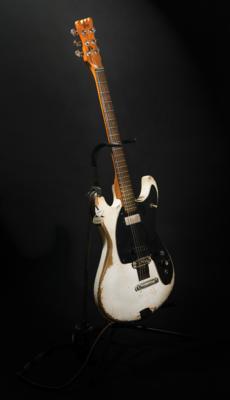 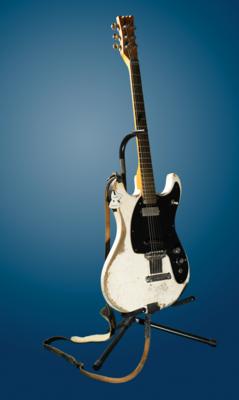 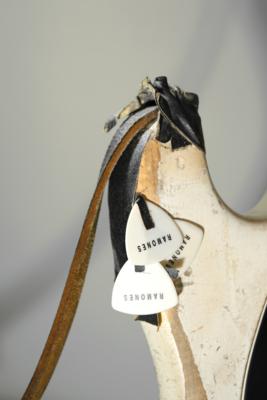 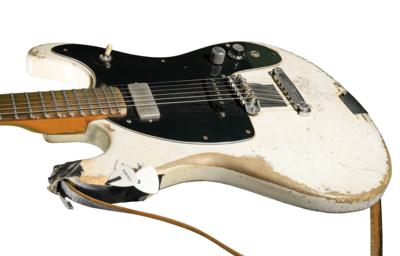 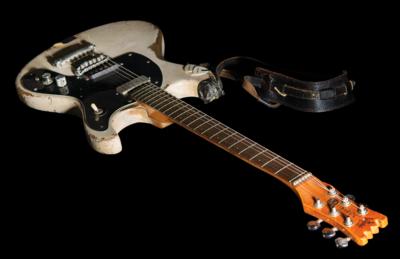 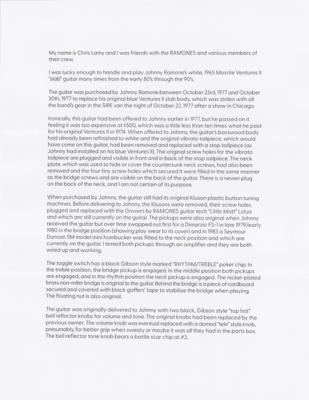 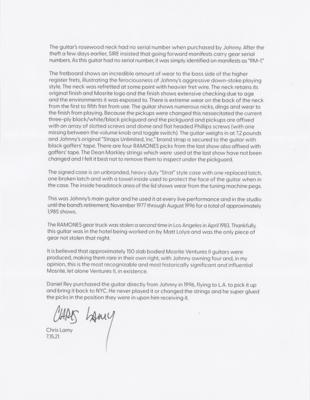 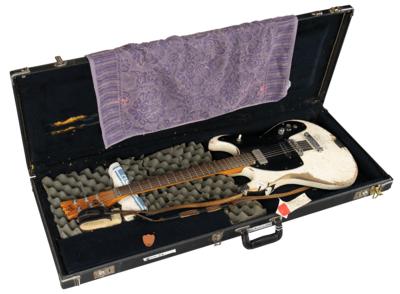 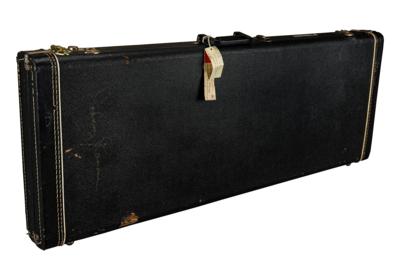 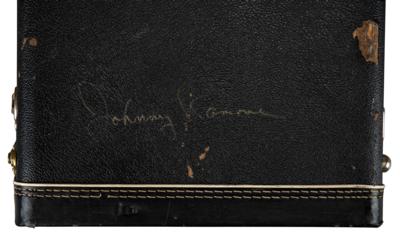 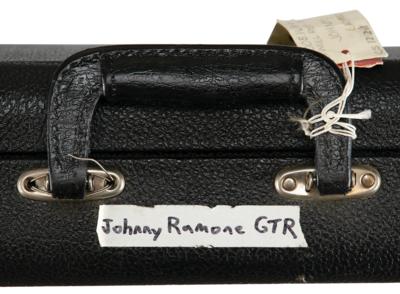 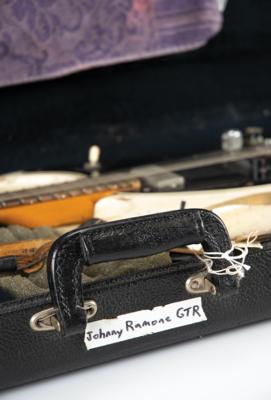 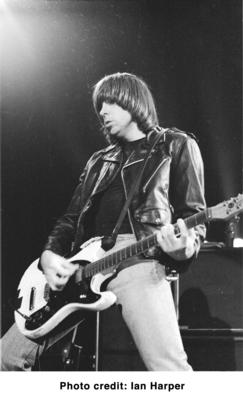 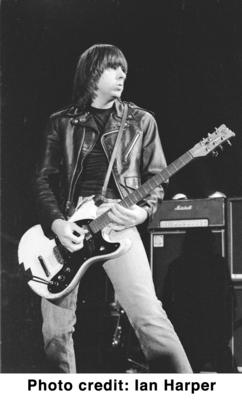 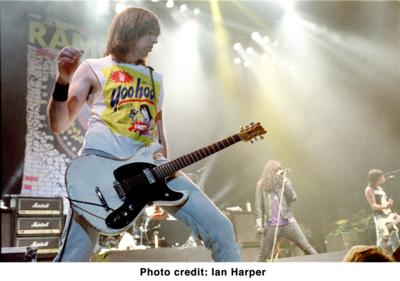 UPDATE: Click here to view the guitar in 5-D


A 1965 Mosrite Ventures II electric guitar personally-owned and -used by Johnny Ramone (John Cummings) for nearly two decades as the guitarist for punk rock legends the Ramones, with the back of the guitar signed in black felt tip, “Johnny Ramone, My Main Guitar, 1977-1996.” Cummings played this guitar at every Ramones performance until his retirement: from November 1977 through August 1996, for a total of approximately 1,985 shows. Additionally, this guitar was used by Cummings for the recording of all 15 Ramones albums (studio and live) from this time period, and can be heard on any live Ramones bootleg from late 1977-1996, of which there are many. It was later displayed at the Rock & Roll Hall of Fame in Cleveland for a number of years. Accompanied by a detailed letter of authenticity from Chris Lamy, a close friend and historian of the Ramones.

According to guitar historian Chris Lamy, Cummings originally purchased this guitar between October 23, 1977 and October 30, 1977, to replace his original blue Ventures II slab body, which was stolen from the Sire Records van (with rest of the band’s gear) on the night of October 22, 1977, after the band’s show at the Aragon Ballroom in Chicago. Ironically, this guitar had been offered to Cummings earlier in 1977, but he passed on it feeling it was too expensive at $500, which was a little less than 10 times what he paid for his original Ventures II in 1974.

Upon its purchasing, the guitar’s basswood body had already been refinished to white and the original vibrato tailpiece, which would have come on this guitar, had been removed by the original owner and replaced with a stop tailpiece (as Cummings had installed on his blue Ventures II in 1975). The original screw holes for the vibrato tailpiece are plugged and visible in front and in back of the stop tailpiece. The neck plate, used to cover the countersunk neck screws, had also been removed by the original owner and the four tiny screw holes that secured it were filled in the same manner as the bridge screws and are visible on the back of the guitar.

Before the guitar’s delivery to Cummings, the original Kluson plastic button tuning machines were removed and their screw holes plugged and replaced with Grovers (present on the guitar) by Ramones guitar tech ‘Little Matt’ Lolya. The pickups, which were also original when Cummings received the guitar, were swapped out first for a Dimarzio FS1 in late 1979-early 1980 in the bridge position (now showing play wear to its cover), and in 1983 a Seymour Duncan SM model mini humbucker was fitted to the neck position: both pickups have been tested through an amplifier and are wired up and working.

The toggle switch has a black Gibson-style ‘Rhythm / Treble’ poker chip, the nickel-plated brass non-roller bridge is original to the guitar, and behind the bridge is a piece of cardboard secured and covered with black gaffers tape to stabilize the bridge when playing. The floating nut is also original. The three-ply black/white/black pickguard and pickups are affixed with an array of slotted screws and dome and flat-head Phillips screws (with one missing between the volume knob and toggle switch).

The guitar was originally delivered to Cummings with two black Gibson-style ‘top hat’ bell reflector knobs for volume and tone. The volume knob was eventually replaced with a domed ‘tele’-style knob, and the bell reflector tone knob is still on the guitar and bears a battle scar chip at #3. The rosewood fingerboard bears no serial number; following the Aragon theft a few days earlier, Sire insisted that manifests carry gear serial numbers going forward. As this guitar had no serial number, it was simply identified on manifests as ‘RM1.’

The fretboard shows an incredible amount of wear to the bass side of the higher register frets, illustrating the ferociousness of Cummings’ aggressive down-stroke playing style. The neck was refretted at some point with heavier fret wire, and it retains its original finish and Mosrite logo, with the finish also showing extensive checking due to age and the environments the guitar was exposed to. There is extreme wear on the back of the neck from the first to fifth fret from playing. Likewise, the guitar exhibits numerous nicks, dings, and wear to the finish. Secured to the guitar with gaffer’s tape is Cummings’ original ‘Straps Unlimited, Inc.’ brand strap and three Ramones picks, which, along with the original strings, were used at the last Ramones show, which occurred at The Palace in Los Angeles, California on August 6, 1996. The guitar weighs in at a very light 7.2 pounds (with strap). Includes an unbranded, heavy duty ‘strat’-style case signed on the top by Johnny Ramone; the case features one replaced latch and one broken latch.

The Ramones’ entire arsenal of gear was stolen a second time in Los Angeles in April 1983. Thankfully, however, this guitar was in the hotel being worked on by Matt Lolya and was the only piece of gear not stolen that night. It is believed that approximately 100-150 slab-bodied Ventures II guitars were produced in 1965, making them rare in their own right, with Cummings owning four of them.