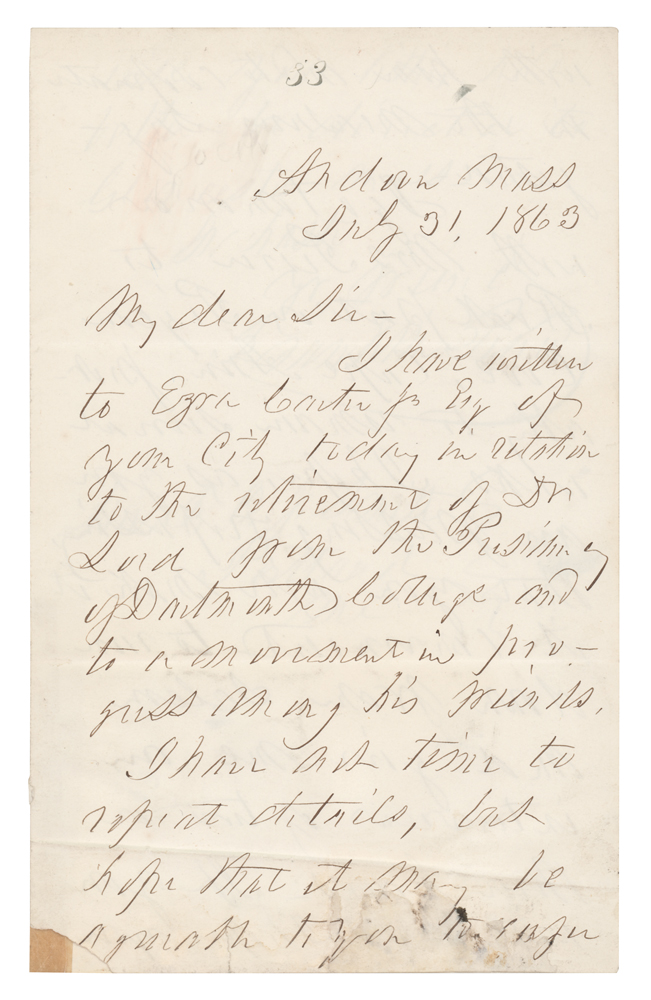 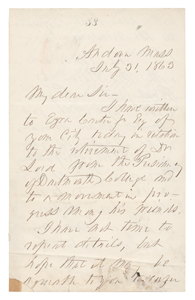 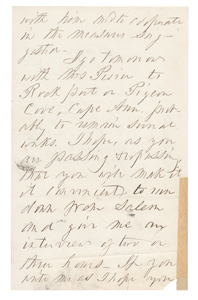 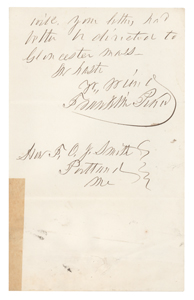 Civil War-dated ALS, three pages on two adjoining sheets, 5 x 8, July 31, 1863. Addressed from Andover, Massachusetts, a handwritten letter to Francis Ormand Jonathan Smith, a former U.S. Congressman from Portland, Maine, in part: "I have written to Ezra Carter Jr. Esq., of your city today in relation to the retirement of Dr. Lord from the Presidency of Dartmouth College and to a movement in progress among his friends. I have not time to reprint details, but hope that it may be agreeable to you to confer with him and to cooperate in the measures suggested. I go tomorrow with Mrs. Pierce to Rockport on Pigeon Cove, Cape Ann, probably to remain several weeks. I hope as you are passing…that you will make it convenient to run down from Salem and give me an interview of two or three hours. If you write me as I hope you will your letter had better be directed to Gloucester, Mass." In very good to fine condition, with creasing to the bottom, loss to lower left corner of the first page, and old tape to the bottom of the inner hinge.

Smith (1806-1876) served as both a congressman and senator for the state of Maine. Perhaps more interestingly, he assisted Samuel F. B. Morse in perfecting and introducing the electric telegraph, and was a financial backer of the first telegraph lines set up in the United States.

Nathan Lord (1793-1870) served as the president of Dartmouth College for more than three decades and was responsible for bringing the college out of debt, improving the overall curriculum, and raising admission levels. His resignation, however, was not entirely voluntary. Despite being a founding member of the American Anti-Slavery Society, Lord and his views on slavery and abolition changed drastically during the Civil War. When the Dartmouth Board of Trustees were deadlocked on awarding an honorary degree to President Lincoln, Lord broke the tie by voting against it, much to the enmity of Amos Tuck, a founding member of the Republican Party and close friend of Lincoln. Lord, 70, tendered his resignation not long before Pierce wrote this letter.