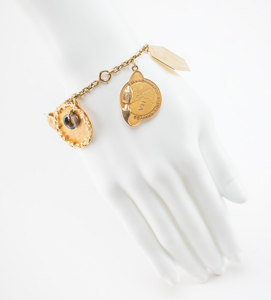 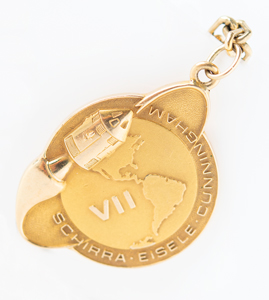 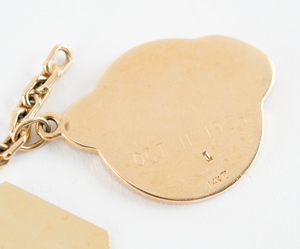 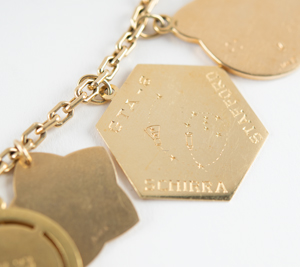 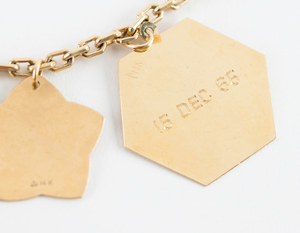 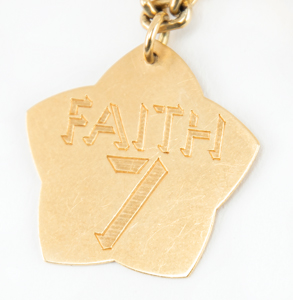 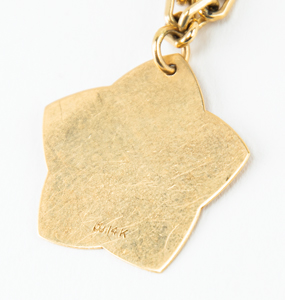 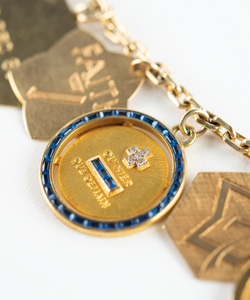 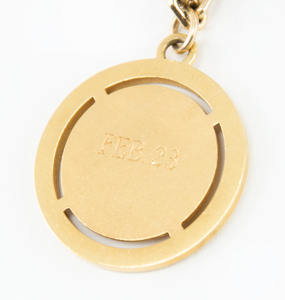 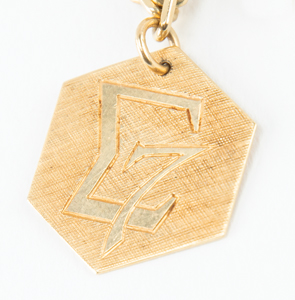 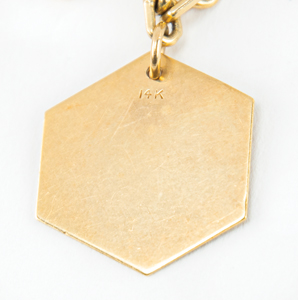 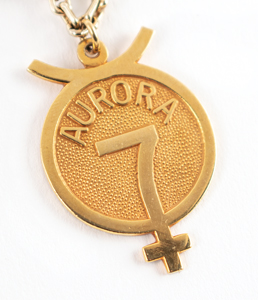 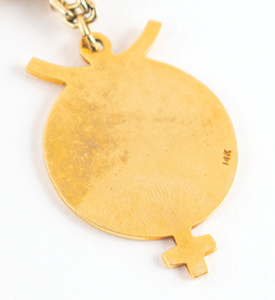 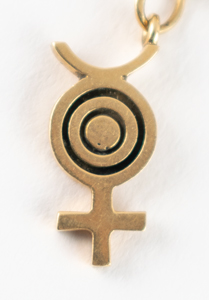 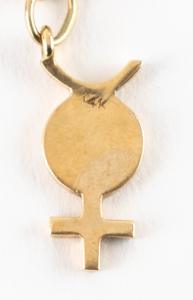 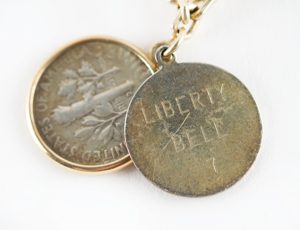 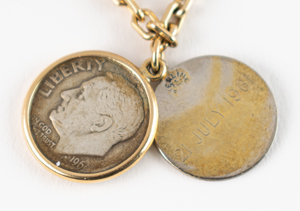 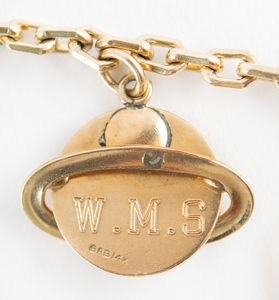 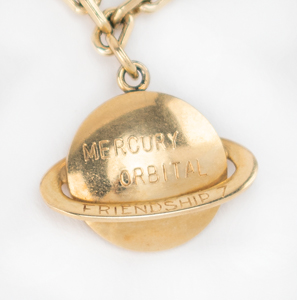 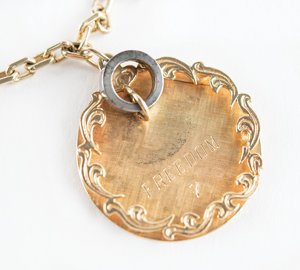 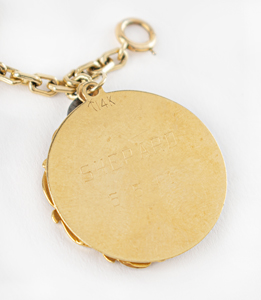 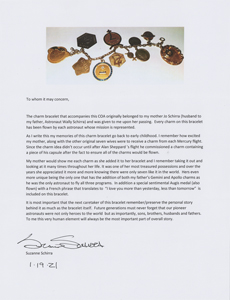 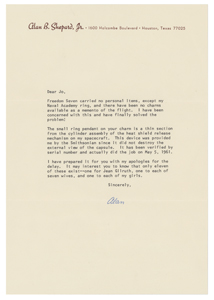 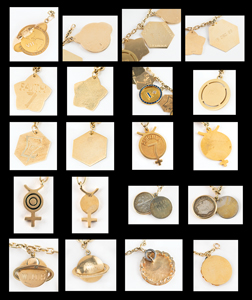 Spectacular charm bracelet from the collection of Jo Schirra, the wife of famed NASA astronaut Wally Schirra, which features an assemblage of nine charms flown on all six manned Mercury missions, the Gemini 6 mission, and the Apollo 7 mission. The gold-tone bracelet, which measures 5.5″ in length, contains the following flown items:

A small section of the heat shield from the Freedom 7 spacecraft, which carried first American astronaut in space Alan Shepard during the Mercury-Redstone 3 mission; this artifact is accompanied by a 14K gold pendant engraved “Freedom 7” on the front, and “Shepard, 5-5-61” on the reverse.

A 10-cent coin and accompanying pendant carried on board the Liberty Bell 7 spacecraft with Gus Grissom during the Mercury-Redstone 4 mission; the dime is set in a circular border and the pendant is engraved on both sides: “Liberty Bell 7” and “21 July 1961.”

A 14K gold ‘orbit’ pendant carried on board the Friendship 7 spacecraft with John Glenn during the Mercury-Atlas 6 mission; the orbit ring is engraved “Friendship 7,” the front and back of the planet section of the pendant is engraved “Mercury Orbital” and “W.M.S.”

A 14K gold Mercury 7 logo pendant carried aboard the Aurora 7 spacecraft with Scott Carpenter during the Mercury-Atlas 7 mission; the pendant is designed in the shape of the Mercury Program logo and bears raised text: “Aurora.”

A hexagonal 14K gold pendant carried on board the Sigma 7 spacecraft with Wally Schirra during the Mercury-Atlas 8 mission; the front of the pendant features the Sigma 7 logo, with the reverse plain.

A star-shaped 14K gold pendant carried aboard the Faith 7 spacecraft with Gordon Cooper during the Mercury-Atlas 9 mission; the front is engraved with the Faith 7 insignia, and the reverse is plain.

A hexagonal 14K gold pendant carried aboard the Gemini SC6 spacecraft with astronauts Wally Schirra and Tom Stafford during the Gemini 6 mission; the front is engraved with the mission’s insignia, and the reverse is marked “15 DEC 65.”

A rare 14K gold flown Apollo 7 Robbins Medal, approximately measuring 1.25″ x 1″, featuring a raised design of the mission insignia on the face, and the reverse engraved with the mission's launch date, “Oct. 11, 1968," and serial number, “1.”

A flown 18K gold ‘love medal’ made by Lyonnais jeweler Alphonse Augis, 1″ in diameter, with lovely sapphire border and central bar, with the face set with a cross of four cut diamonds and featuring raised French text: “Qu’hier, Que demain,” which translates to “More than yesterday, less than tomorrow.” The reverse is engraved “Feb. 23,” which, in 1946, was the date Wally and Jo were married. The flown status of the Augis medal has been confirmed by Schirra's daughter; however, its affiliated mission remains unknown. In fine condition.

Included with the Freedom 7 heat shield pendant is a signed letter of provenance from Shepard to Jo Schirra, which reads: “Freedom Seven carried no personal items, except my Naval Academy ring, and there have been no charms available as a memento of the flight. I have been concerned with this and have finally solved the problem! The small ring pendant on your charm is a thin section from the cylinder assembly of the heat shield release mechanism on my spacecraft. This device was provided me by the Smithsonian since it did not destroy the external view of the capsule. It has been verified by serial number and actually did the job on May 5, 1961. I have prepared it for you with my apologies for the delay. It may interest you to know that only eleven of these exist—one for Jean Gilruth, one to each of seven wives, and one to each of my girls. Sincerely, Alan.” Includes the original mailing envelope, marked by Shepard, “Jo Schirra.”

Accompanied by a detailed letter of provenance signed by Jo and Wally’s daughter, Suzanna Schirra, which reads, in part: “The charm bracelet that accompanies this COA originally belonged to my mother Jo Schirra (husband to my father, Astronaut Wally Schirra) and was given to me upon her passing. Every charm on this bracelet has been flown by each astronaut whose mission is represented.

As I write this my memories of this charm bracelet go back to early childhood. I remember how excited my mother, along with the other original seven wives were to receive a charm from each Mercury flight. Since the charm idea didn’t occur until after Alan Shepard’s flight he commissioned a charm containing a piece of his capsule after the fact to ensure all of the charms would be flown.

My mother would show me each charm as she added it to her bracelet and I remember taking it out and looking at it many times throughout her life. It was one of her most treasured possessions and over the years she appreciated it more and more knowing there were only seven like it in the world. Hers even more unique being the only one that has the addition of both my father’s Gemini and Apollo charms as he was the only astronaut to fly all three programs. In addition a special sentimental Augis medal (also flown) with a French phrase that translates to ‘I love you more than yesterday, less than tomorrow’ is included on the bracelet.”

A simply outstanding piece that represents a crossroads of all three of NASA’s early space programs. Among the bracelet’s nine charms, particular focus must be given to the presence of the flown gold Apollo 7 Robbins Medallion serial numbered “1.” These gold medallions, often referred to as the ‘wives medallions,’ as they were routinely presented as gifts to the wives of astronauts, were specially produced and made only available to the mission’s flight crew. Examples of these for sale or at auction are virtually unheard of. The bracelet and its assemblage of flown artifacts, beautifully and comprehensively, honors the rich legacy of America’s manned space program. But its story also runs much deeper, telling a tale built upon love and trust, while serving as a uniquely thoughtful gift of thanks from an astronaut to his wife.