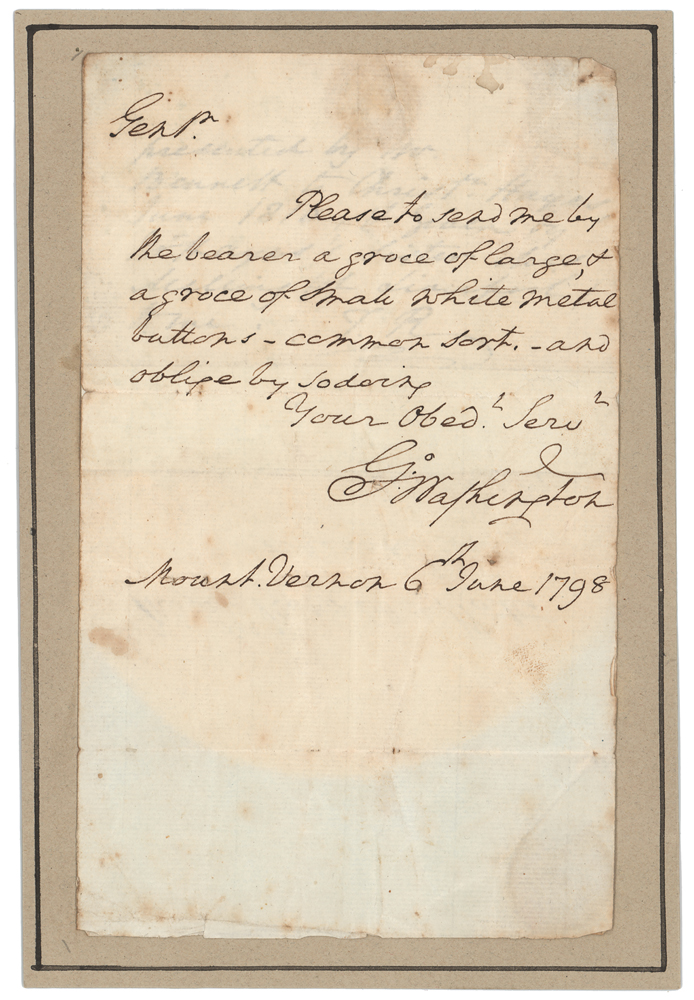 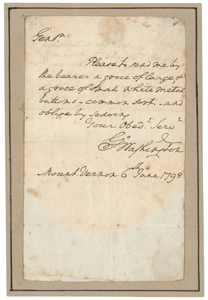 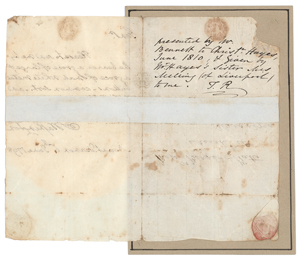 ALS signed “Go: Washington,” one page, 4.5 x 7.25, June 6, 1798. Letter to merchants "Bennett & Watts" of Alexandria, who regularly shipped household goods to Mont Vernon, in full: "Please to send me by the bearer a groce of large, & a groce of small white metal buttons—common sort,—and oblige by so doing." Reverse of second integral is addressed in the hand of Washington, with the reverse left edge affixed to an off-white 5.5 x 8 mounting sheet. In very good condition, with creasing, light toning and scattered small stains, and a circular seal-related stain to the top blank area. Washington and his family would have no immediate use for two gross (288) white metal buttons of a "common sort." These were likely ordered for the Mont Vernon seamstresses, who were tasked with making the clothing for the plantation's approximate 125 slaves; the white buttons would have matched the white sack-like shirts worn by the farm's field workers. Washington would emancipate his slaves posthumously as instructed in his will.

A month later, on July 13, 1798, Washington readily accepted President Adams’ commission to lead the United States Army in the burgeoning Quasi War with France. The high-ranking post demanded little of Washington who, while happily ensconced at his home in Mont Vernon, entrusted the lion’s share of his duties to inspector general of the Army, Alexander Hamilton. Given the flexibility of his post, and barring the emergence of a French invasion, Washington once again settled into retirement as a private citizen, content with overseeing renovations to his mansion and the myriad operations of his five farms and sprawling 7,400-acre estate.