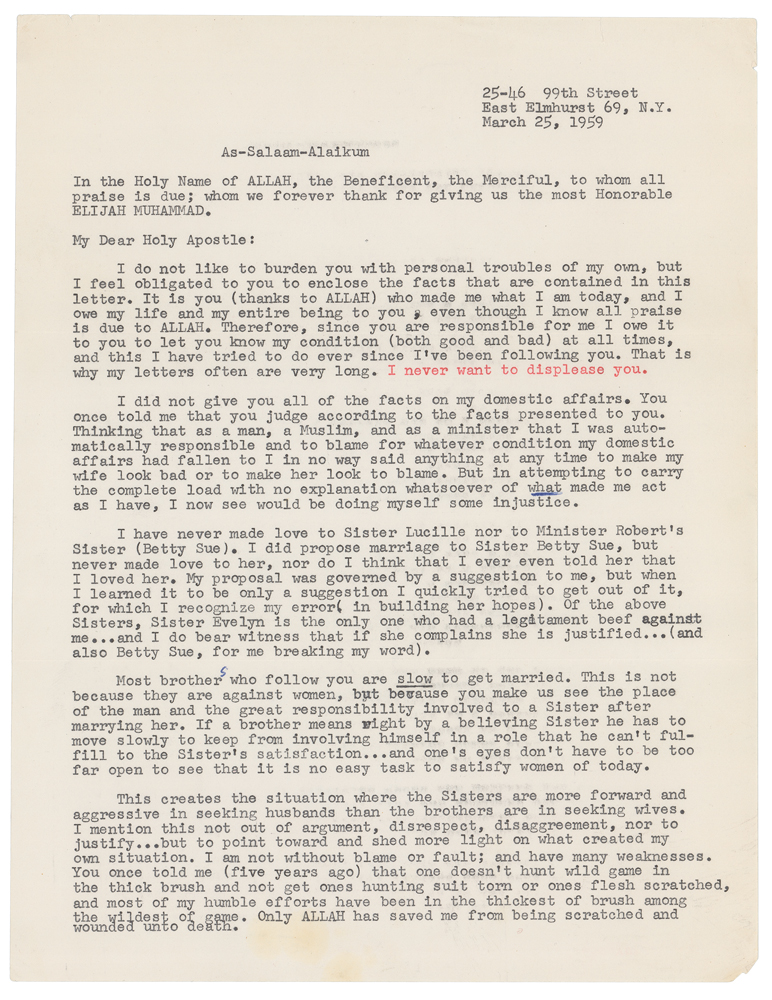 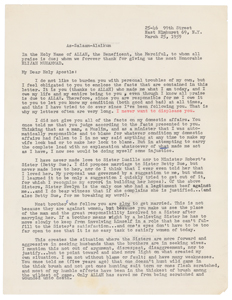 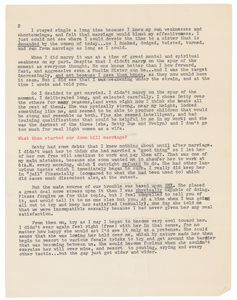 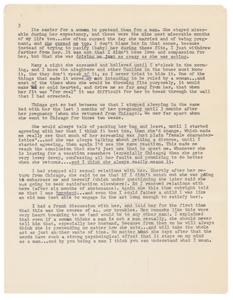 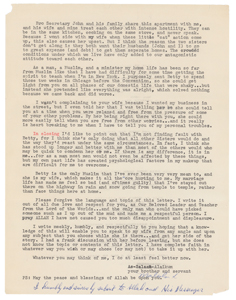 TLS signed “Malcolm X,” four pages, 8.5 x 11, March 25, 1959. Letter to his prophet and teacher Elijah Muhammad, touching on deeply private subjects relating to his wife and marriage. Addressing the topic of his "down hill marriage," Malcolm recounts the dispassionate atmosphere surrounding his engagement to Betty Shabazz, the revelation that he may not have been ready for such a domestic partnership, and the frank disclosure of intimate marital problems: "The main source of our trouble was based upon SEX." Discussing feelings of inadequacy after her accusations of impotence, a tiring pregnancy, and worried that problems at home will have an effect on his work, Malcolm X looks to Elijah Muhammad for guidance and hopes that he will be able to speak with Betty.

The letter reads, in part: "I do not like to burden you with personal troubles of my own, but I feel obligated to you to enclose the facts…It is you (thanks to Allah) who made me what I am today, and I owe my life and my entire being to you, even though I know all praise is due to Allah…I never want to displease you…I have never made love to Sister Lucille nor to Minister Robert's Sister (Betty Sue). I did propose marriage to Sister Betty Sue, but never made love to her, nor do I think that I ever even told her that I loved her. My proposal was governed by a suggestion to me, but when I learned it to be only a suggestion I quickly tried to get out of it, for which I recognize my error (in building her hopes)…

Most brothers who follow you are slow to get married. This is not because they are against women, but because you make us see the place of the man and the great responsibility involved to a Sister after marrying her…One's eyes don't have to be too far open to see that it is no easy task to satisfy women of today.

This creates the situation where the Sisters are more forward and aggressive in seeking husbands than the brothers are in seeking wives…You once told me (five years ago) that one doesn't hunt wild game in the thick brush and not get ones hunting suit torn or ones flesh scratched, and most of my humble efforts have been in the thickest of brush among the wildest of game. Only Allah has saved me from being scratched and wounded unto death.

I stayed single a long time because I knew my own weaknesses and shortcomings, and felt that marriage would blunt my effectiveness. I just could not see where I could devote the time to a sister that is demanded by the women of today…so I ducked, dodged, twisted, turned, and ran from marriage as long as I could.

When I did marry it was at a time of great mental and spiritual weakness on my part. Despite that I didn't marry on the spur of the moment as everyone thought…I deliberated long, and selected carefully. I chose Betty over the others for many reasons, (and even right now I think she beats all the rest of them). She was physically strong, near my height, looked something like me, and seemed to be able to produce children that would be strong and resemble us both. Plus she seemed intelligent, and had training qualifications that could be helpful to me in my work; and she also was the darkest of the three (she, Betty Sue and Evelyn) and I don't go too much for real light women as a wife.

What then started our down hill marriage?

Betty had some debts that I knew nothing about until after marriage. I didn't want her to think she had married a 'good thing' so I let her of her own free will continue to work and pay them off. That was one of my main mistakes, because she soon wanted me to chaufer her to work at 6:A.M. every morning, which I outright refused to do. She had other luxurious tastes which I immediately began to curb…

But the main source of our trouble was based upon SEX. She placed a great deal more stress upon it than I was physically capable of doing. Please forgive me for this topic, but I feel compelled to tell you of it, and would tell it to no one else but you. At a time when I was going all out to try and keep her satisfied (sexually), one day she told me that we were incompatible sexually because I had never given her any real satisfaction.

From then on, try as I may I began to become very cool toward her. I didn't ever again feel right (free) with her in that sense, for no matter how happy she would act I'd see it only as a pretense. She could sense that she was losing her hold over me, which by nature made her then begin to resort to various female tricks to try and get around the barrier that was becoming between us. She would become furious when she couldn't exercise her will over mine, and resort to pouting, crying and every other tactic… but the gap just got wider and wider.

It's easier for a woman to pretend than for a man. She stayed miserable during her expectancy, and those were the nine most miserable months of my life too… she often cursed the day she married and of being pregnant, and she cursed me too…Things got so bad between us that I stopped sleeping in the same bed with her the last 3 months of her pregnancy until 3 months after her pregnancy…She would always talk of packing her bag and leave, until I started agreeing with her that I think it best too, then she'd change…and she was always talking about getting a divorce, until I started agreeing, then again I'd see the same reaction…

I had stopped all sexual relations with her. Shortly after her return from Chicago, she said to me that if I didn't watch out she was going to embarrass me and herself (which under questioning she later said she was going to seek satisfaction elsewhere). So I renewed relations with her (after six months of abstinence). Again she this time outright told me that I was impotent…and even tho I could father a child I was like an old man (not able to engage in the act long enough to satisfy her).

I had a frank discussion with her, and told her for the first time that this was the source of all our troubles. Her remarks like this were very heart breaking to me (and would be to any other man). I explained that even if a woman thinks a man is not a man sexually, she should never tell him that, especially her husband, because from then on he will always think she is pretending no matter how she acts…

As a man, a Muslim, and a minister my home life has been so far from Muslim like that I have had difficulty for some time getting the spirit to teach when I'm in New York…Betty is the only Muslim that I've ever been very very mean to, and she is my wife, which makes it all the more hurting to me. My marriage life has made me feel so bad (and oftentimes guilty) that I've stayed out there on the highway in rain and snow going from temple to temple, rather than face things here at home.

Please forgive the language and topic of this letter. I write it out of all due love and respect for you, as Our Beloved Leader and Teacher from the Lord of the Worlds…I write meekly, humbly, and respectfully to you hoping that a knowledge of this will enable you to speak to my wife from any angle and upon any subject that you choose while she is there… and get her side of the story. I had a frank discussion with her before leaving, but she does not know the topic or contents of this letter…Whatever you may think of me, I do at least feel better now." Malcolm X makes a few corrections and underlines in blue ballpoint, and adds a brief handwritten postscript: "I humbly and sincerely submit to Allah and His Messenger." In fine condition. Accompanied by a custom-made slipcase.

This letter makes plain the type of confessional relationship Malcolm had with Muhammad, and communicates the level of discipleship he held for the man and the cause of the Nation of Islam. This tone is all the more notable given that in a few short years Malcolm would lose faith in Muhammad—based in part on accusations of sexual misbehavior against Muhammad made by young NOI secretaries—and very publicly remove himself from the association, ultimately prompting his own death by assassination. Thanks to his uncompromising stand for social justice, Malcolm X now stands as a mythic figure of the Civil Rights Movement; this letter stands as a testament and reminder of the very human identity behind the icon.