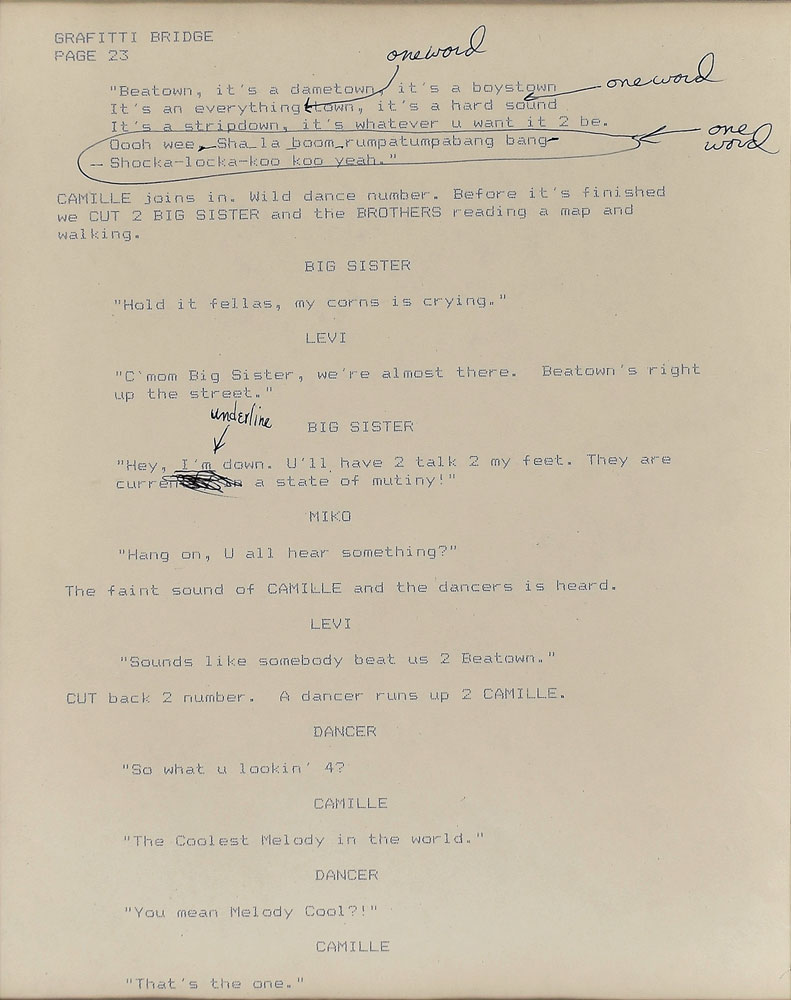 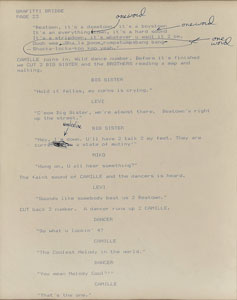 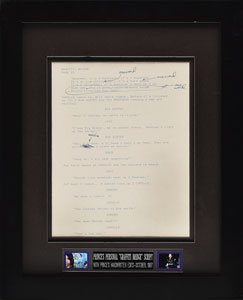 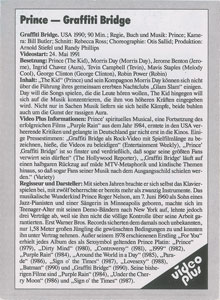 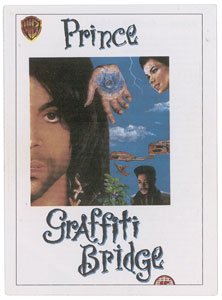 Original page from Prince's hand-edited second draft script for the 1990 film Graffiti Bridge, 7.25 x 9.25, no date but circa early October 1987. The page, marked "Page 23," features seven words in Prince's hand: he writes "one word" three times, and "underline" once, in addition to circling a line and making one deletion. Double-matted and framed with a descriptive plaque to an overall size of 13 x 16. Includes a promotional film card from the film’s release. In fine condition. The complete original script, sold by RR Auction in February 2018, originated from the collection of Prince’s former assistant; accompanied by a color copy of the original letter of provenance.

In mid-September of 1987, Prince finished his first script for a musical film project entitled Graffiti Bridge, which featured himself in the lead role as Camille, and costarred Madonna as his former flame, Ruthie Washington. In keeping with his vision of 'a musical fantasy shot on theatrical sets,' Prince planned to cast several of his own band members in the film—Atlanta Bliss as Joshua, Eric Leeds as Sax, Cat Glover as Vienna, Greg Brooks as Gruff, and Wally Safford as Puff. In mid-October, a brief three-day script conference with Madonna proved disastrous, with the singer-actress publicly ridiculing the script and dismissing any potential collaboration. As a result, the original Graffiti Bridge script was abandoned and the project placed on hiatus until 1989. Graffiti Bridge continued to have script problems and underwent several revisions before a screenplay was finalized on February 7, 1990; the script alterations effectively made the film a quasi-sequel to Purple Rain. Although the film earned negative reviews and poor box-office totals, the Graffiti Bridge soundtrack was regarded highly and reached gold sales figures in both the UK and America.