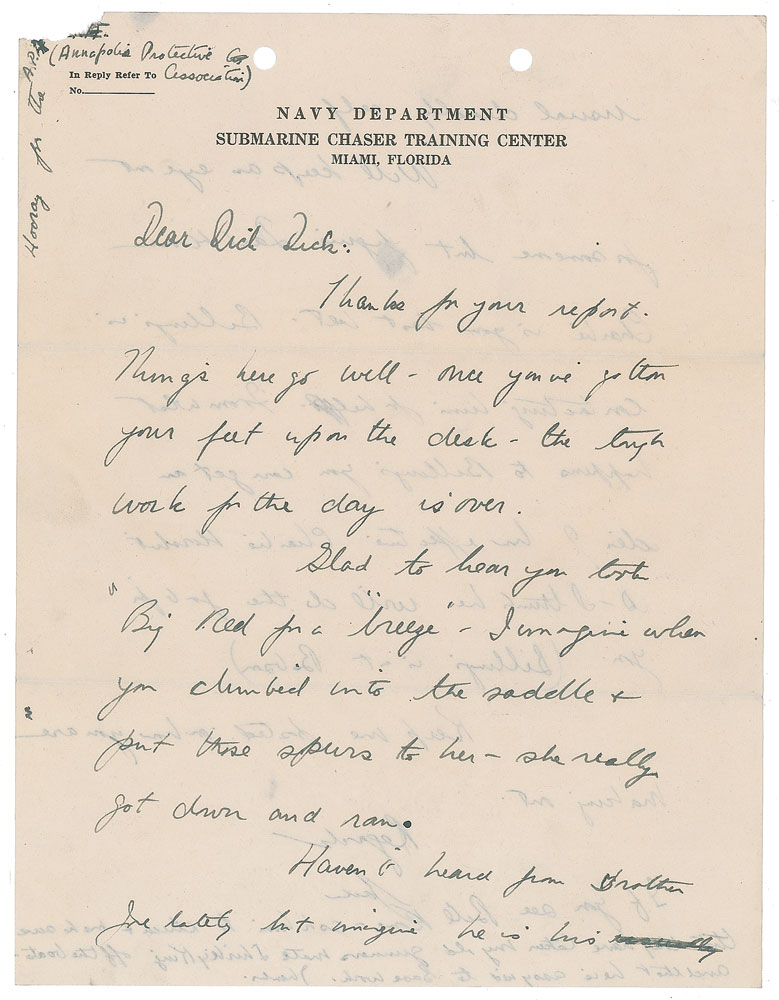 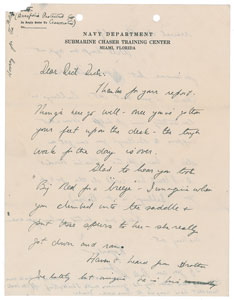 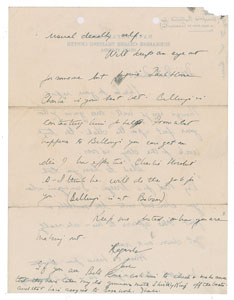 ALS signed “Jack,” one page both sides, 8 x 10.5, Navy Department, Submarine Chaser Training Center letterhead, no date but circa March 1944. Letter to his friend Richard Flood in Newport, Rhode Island, written just eight months after the destruction of the PT-109 torpedo boat. Kennedy makes reference to his older brother, Joseph P. Kennedy, Jr., who was flying missions in Europe and would tragically be killed five months later when his plane exploded prematurely. In part: "Thanks for your report. Things here go well—once you've gotten your feet upon the desk—the tough work of the day is over. Glad to hear you took 'Big Red' for a 'breeze'—I imagine when you climbed into the saddle & put the spurs to her—she really got down and ran. Haven't heard from Brother Joe lately but imagine he is his usual deadly self. Will keep an eye out for someone but figure Dark Horse Charlie is your best bet. Billings is contacting him for help. From what happens to Billings you can get an idea of how effective Charlie…is—I think he will do the job for you. (Billings is at Boston). Keep me posted how you are making out." He adds a postscript, "If you see Bill Rome—ask him to check & make sure that they have taken my old gunners mate Shirley King off the boats—and that he is assigned to base work." In the upper right corner of the first page, Kennedy writes: "Hooray for the A.P.A. (Annapolis Protective Association)." In very good to fine condition, with creasing, several horizontal folds, and minor paper loss to the upper left corner. Accompanied by a photocopy of the original mailing envelope (see lot 23).

John F. Kennedy used his father Joseph P. Kennedy’s influence to get a position in the United States Naval Reserve. Commissioned an ensign in October 1941, he joined the staff of the Office of Naval Intelligence in Washington, D.C. In January 1942, he was transferred to the field office in Charleston, South Carolina. After attending Naval Reserve Officer Training School in Chicago and Motor Torpedo Boat Squadrons Training Center in Rhode Island, Kennedy received a commission as a lieutenant junior grade. He commanded a patrol torpedo (PT) boat in Jacksonville, Florida, and the Panama Canal until he was assigned to duty in the south Pacific theater.

On April 24, 1943, Kennedy took command of PT-109, based in the Solomon Islands. On the night of August 1-2, 1943, he commanded PT-109 in a group of fourteen other PTs sent to block four Japanese destroyers. During the resulting engagement, the PTs failed to inflict any damage, but PT-109 was cut in half by the Japanese destroyer Amagiri. Two crew members were killed, but Kennedy and ten others survived in the wreckage and managed to swim more than three miles to a deserted island. Kennedy clenched the strap of a badly burned crew member’s life jacket between his teeth and towed him to safety. Over the next week, Kennedy or the entire crew swam to additional islands looking for food and fresh water. On one, Kennedy found packages of crackers and a fifty-gallon drum of drinkable water left by the Japanese and a small canoe, which he paddled back to his starving crew. After native scouts found the crew and took a message scratched on a coconut shell to allied authorities, another PT boat rescued them on August 8. Kennedy later received the Navy and Marine Corps Medal for heroism for his actions in saving the crew.

He returned to duty for several months in the Solomon Islands before a doctor relieved him of command because of his back injuries. He was sent back to the United States in January 1944, and he wrote this letter to Flood from Miami, where he was stationed at the Submarine Chaser Training Center. From May to December 1944, Kennedy was hospitalized at the Chelsea Naval Hospital in Massachusetts for back surgery and recuperation, then released from active duty. While Kennedy was at the hospital, Flood visited him from Newport. After more therapy at a military hospital in Arizona, Kennedy retired from the Naval Reserve on physical disability and was honorably discharged with the full rank of lieutenant.

The recipient of this letter, Richard R. Flood, was born in Massachusetts and graduated from Harvard College in 1939, and served as a lieutenant in the Navy during World War II. Admitted to the Massachusetts bar in 1948, he established a practice in Lowell, Massachusetts, and was a partner in the firm of Flood, Valentine, and Foisy until his death. In a 1964 interview, Flood recalled this period in Kennedy’s life: ‘I think he left Chelsea and went for further rest to Florida, and he wrote me from Florida keenly interested in some of his old crew that had been with him and whether they were still on the boats or not. As a matter of fact, he was writing some of his officers that he knew in Melville [PT Training School in Melville, Rhode Island] to see that some of his crew who had been on the boat too long would be taken off and given a little change…I can’t think of the names of the men, but I know there was one officer down there named Bill Rome and he thought he could do something to help these crewmen out.’

He mentions his close friend Lem Billings, who he met during high school at Choate. The Kennedys treated Billings as a member of the family, with Joseph Kennedy, Sr., calling him ‘my second son.’ After failing medical tests required by the military, Billings gained admission to the American Ambulance Field Service with a recommendation from Joseph P. Kennedy, Sr. He served in North Africa in 1942-1943, but received a commission from the YUS Naval Reserve in 1944, again perhaps with Kennedy’s support, and served in the south Pacific until being discharged in 1946.

Shirley King had been a member of the crew of PT-59, the boat Kennedy commanded after being rescued and which he helped convert into a gunboat. King was from Kentucky, and ‘the boys’ liked him because he kept a still on the boat. He took torpedo propulsion fuel and ran it through his still: ‘What came out would make you slap your grandma,’ King remembered, but it made a ‘smooth drink’ mixed with pineapple juice. Kennedy and King preferred it straight.

The discussion of “Big Red” likely alludes to PT Boat Red, a training boat used at the Motor Torpedo Boat Squadrons Training Center in Melville, Rhode Island. Veterans of training there called it ‘the Annapolis of the Mosquito Fleet’ in reference to the Naval Academy at Annapolis, Maryland. Kennedy’s addition of “Hooray for the A.P.A. (Annapolis Protective Association)” reflects the PT crews’ belief that they protected the larger ships commanded by graduates of the Naval Academy at Annapolis. A wonderful letter packed with references to Kennedy’s life and military career.