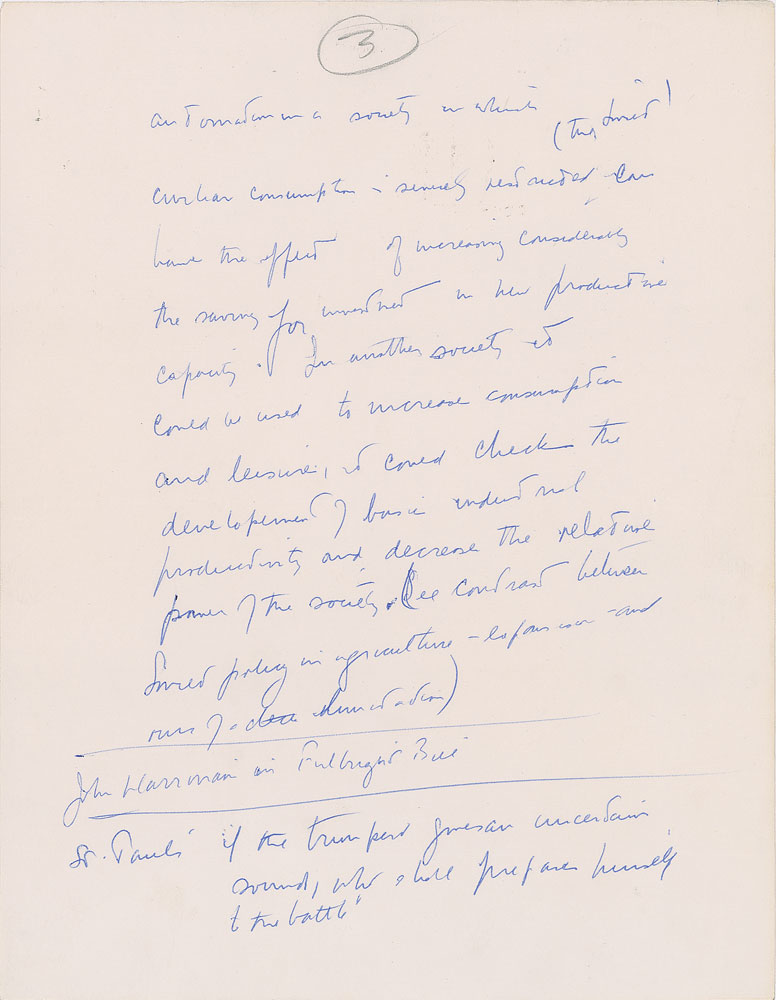 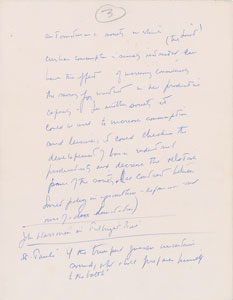 Handwritten notes in blue ballpoint by John F. Kennedy, unsigned, one page, 8.5 x 11, no date but circa October 1960. The then-presidential candidate writes, in full: "automation in a society in which (the Soviet) civilian consumption is seriously restricted can have the effect of increasing considerably the saving for investment in new productive capacity. In another society it could be used to increase consumption and leisure, it could check the development of basic industrial productivity and decrease the relative power of the society. (See contrast between Soviet policy in agriculture - expansion - and ours of limitation / John Harriman on Fulbright Bill / St. Paul's - 'if the trumpet gives an uncertain sound, who shall prepare himself for the battle.'" Annotated "3" in pencil at the top of the page. In fine condition.

The biblical quote that Kennedy writes at the bottom of the page is from St. Paul First Corinthians 14:8. The trumpet metaphor was one close to Kennedy's heart: he had saved this biblical quote in his notebooks and alluded to this quote repeatedly in one form or another during many campaign speeches in October and November, 1960, sometimes using 'bugle' instead of 'trumpet,' and 'note' instead of 'sound.' In several of those speeches, he also addressed the impact of automation on agriculture.

In the books Sounding the Trumpet: The Making of John F. Kennedy's Inaugural Address, by Richard J. Tofel, and Thurston Clark's Ask Not, both authors credit the St. Paul quote as the basis of the line in Kennedy's Inaugural Address: 'Now the trumpet summons us again—not as a call to bear arms, though arms we need; not as a call to battle, though embattled we are—but a call to bear the burden of a long twilight struggle.'

President Kennedy's inaugural address is considered one of the finest of the 20th century, and served as a model for future presidents' efforts. Bill Clinton met JFK in the Rose Garden at age 16, and in the final paragraph of his first inaugural address, he paid homage to his boyhood idol, stating: 'We have heard the trumpets, we have changed the guard. And now each in our own way, and with God's help, we must answer the call.'