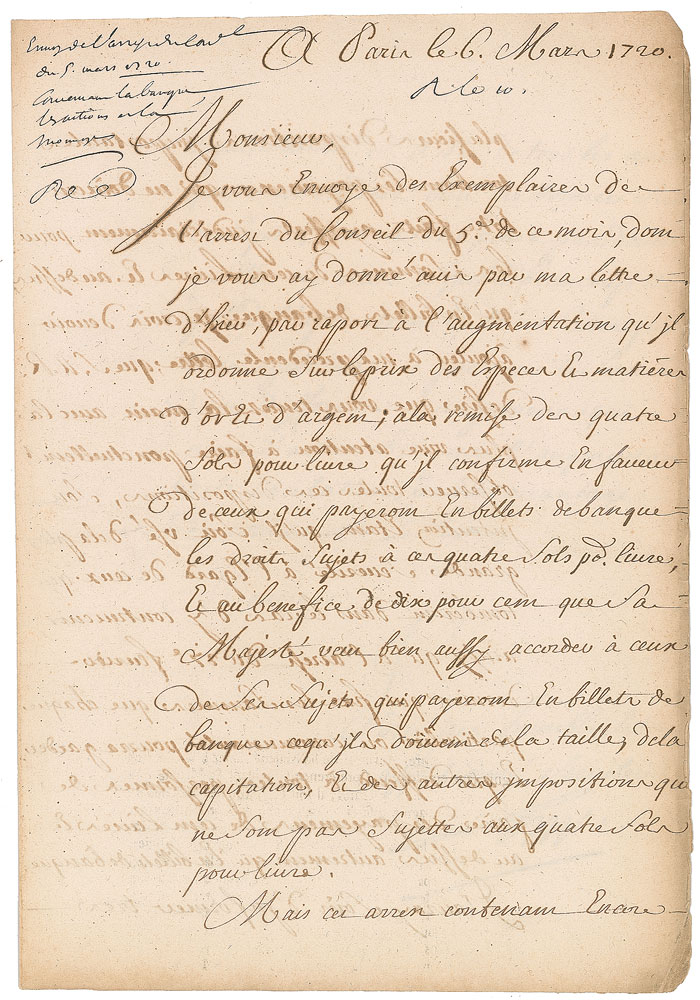 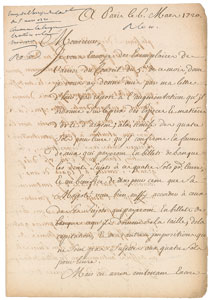 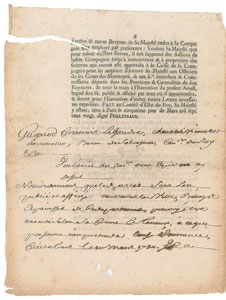 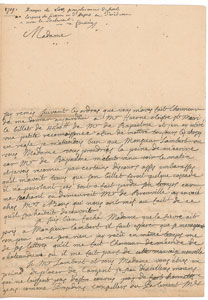 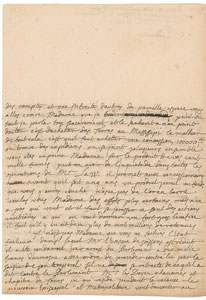 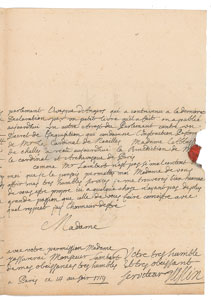 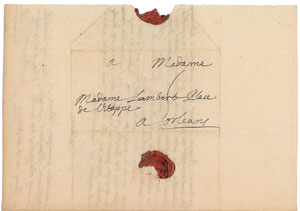 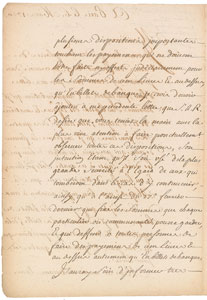 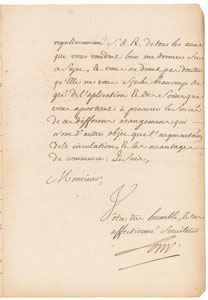 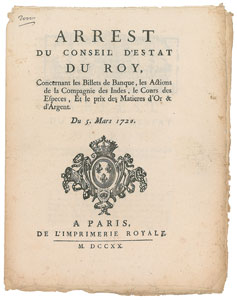 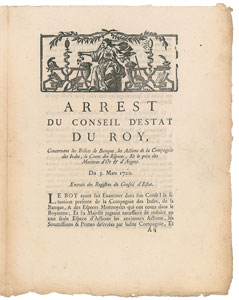 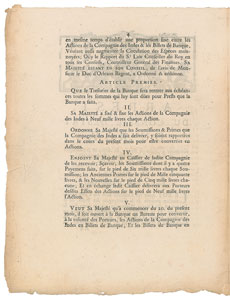 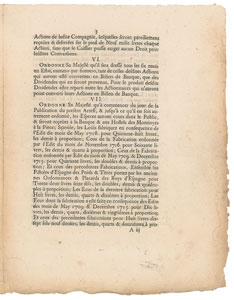 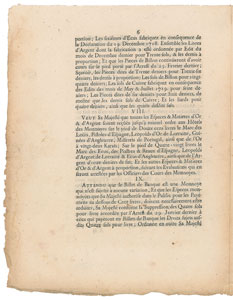 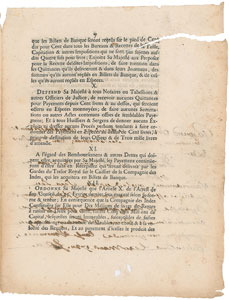 Scottish economist (1671-1729) known as a monetary reformer and as the originator of the 'Mississippi scheme' for the development of French territories in America. LS in French, signed "Law," three pages on two adjoining sheets, 8 x 11.75, March 6, 1720. Letter to a gentleman concerning the increase in the orders in the price of gold and silver coins and metal, in full (translated): "I am sending you copies of the decision of the council held the 5th of this month, of which I informed you in my letter yesterday, concerning the increase in orders in the price of gold and silver coins and metal, and the rebate of four pence [sous] per pound [livre] it grants to those who pay the duties subject to those four pence per pound in banknotes. And His Majesty is also willing to offer ten percent to those of his subjects who will pay in banknotes what they owe in per capita levy, poll tax, and other taxes that are not subject to the four pence per pound. But since this decision contains several additional important provisions concerning payments that can only be made or offered legally for sums of one hundred livres and above in banknotes, I feel I should add to my previous letter the comment that H[is] R[oyal] H[ighness] wants you to insure that all these provisions are strictly observed in a timely manner, as it is his intention that those who disobey them shall be dealt with harshly. The same attention should be paid to the decision of last February 27 which sets the sums that each individual or community can keep, and which forbids any person from making payments of one hundred livres and above in anything but banknotes. I will be carefully keeping H.R.H. informed on a regular basis of any opinions you pass on to me on this subject. Do not doubt his extreme gratitude for the diligence and care you will exert to insure the success of these different arrangements, whose sole object is to increase circulation and the advantages of trade." In fine condition, with writing showing through from opposing sides. Accompanied by an official printed copy of the council decision referenced in the letter, as well as a 1719 letter in French from one "Vaslin" to Mrs. Lambert in Orleans concerning the investment of funds, recommending her purchase of land in Mississippi, and lauding the profits of Law's enterprise.

Law made his name with a concept of paper money backed by land, rather than by gold or silver, promulgated in his 1705 text Money and Trade Considered: With a Proposal for Supplying the Nation with Money. After pitching his idea around Europe, he was finally given the chance to enact it in 1716 in France. His efforts led to the creation of the Mississippi Company monopoly, which, along with its contemporary South Sea Company, became one of the mythical early bubbles. Early investors in the company became near-instant millionaires (indeed, the word 'millionaire' originated from Mississippi Company traders), and by January 1720 prices were rising by 23% per month. The bubble popped in May 1720, leaving riots in its wake. Fearing for his life, Law fled to Brussels and then Venice, spending the rest of his life in relative poverty.