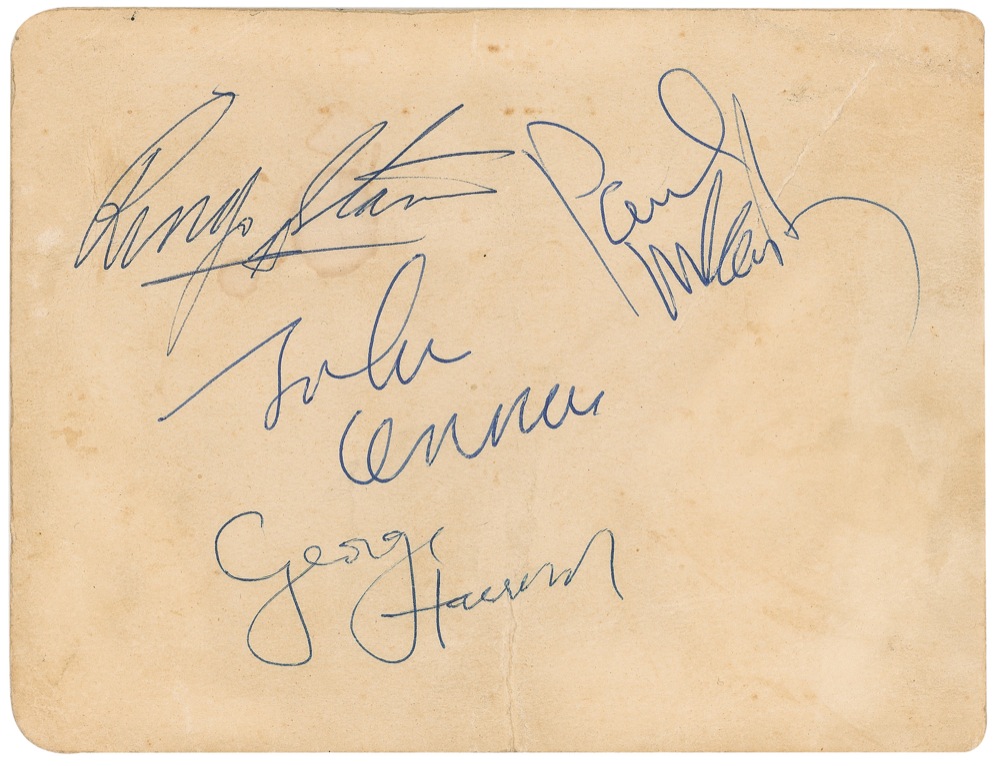 Rare invitation to an EMI lunchtime cocktail party held in honor of the Beatles. Invitation measures 5.75 x 4.5, and reads, ‘The Directors of E.M.I Records Ltd. cordially invite Mrs. S. Bell to a Lunchtime Cocktail party to be given in honour of Britain’s top recording group The Beatles on Monday Next, November 18th, 1963, at 12 noon in The Conference Room, E.M.I. House, 20 Manchester Square, London, W.I.’ Signed on the reverse in blue ballpoint, “Ringo Starr,” “Paul McCartney,” “John Lennon,” and “George Harrison.” In very good condition, with several creases with ones passing through portions of all four signatures, but not affecting legibility, scattered toning and soiling, with a couple moisture spots to Starr’s signature, and moderate handling wear. Accompanied by a letter of provenance which reads, ‘The invite to a Lunchtime Cocktail Party in honour of the 'Beatles' was signed by the group for Mrs. S. Bell, my cousins wife, on November 18th, 1963, at Manchester Square London W.1. She worked as a secretary at E.M.I in the early sixties. The item has been in our family since this time.’ Accompanied by a certificate of authenticity from Tracks.

Coming two weeks after the Royal Command Performance, it was at this VIP event that The Beatles received a bevy of silver disc awards for the ‘Twist & Shout’ EP, ‘She Loves You’ single, Please Please Me LP and, most notably, the yet to be released With The Beatles, which had advance orders of a half-million copies. Pre-certified Roger Epperson/REAL and RR Auction COA.