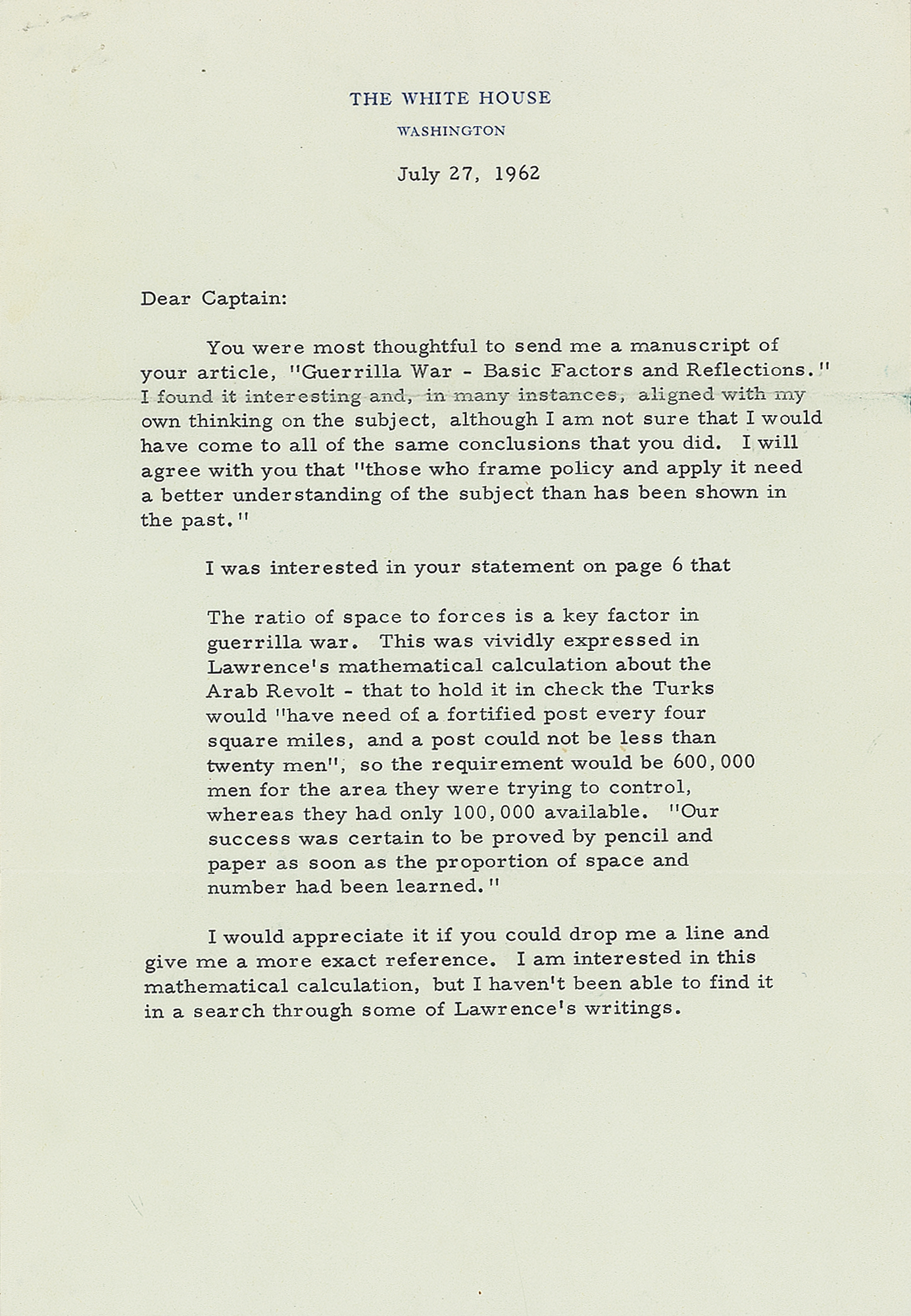 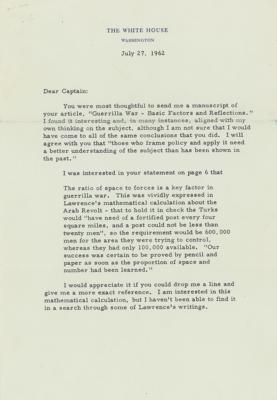 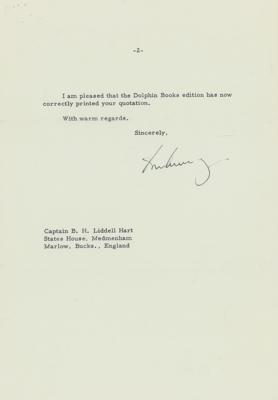 TLS as president, two pages, 7 x 10.25, White House letterhead, July 27, 1962. Letter to influential English soldier and military historian Captain B. H. Liddell Hart. In part: “You were most thoughtful to send me a manuscript of your article, ‘Guerrilla War—Basic Factors and Reflections.’ I found it interesting and, in many instances, aligned with my own thinking on the subject, although I am not sure that I would have come to all the same conclusions that you did. I will agree with you that ‘those who frame policy and apply it need a better understanding of the subject than has been shown in the past.’ I was interested in your statement on page 6 that ‘The ratio of space to forces is a key factor in guerrilla war. This was vividly expressed in Lawrence’s mathematical calculation about the Arab Revolt—that to hold it in check the Turks would ‘have need of a fortified post every four square miles, and a post could not be less than twenty men,’ so the requirement would be 600,000 men for the area they were trying to control, whereas they had only 100,000 available’…I would appreciate it if you could drop me a line and give me a more exact reference. I am interested in this mathematical calculation, but I haven’t been able to find it in a search through some of Lawrence’s writings. I am pleased that the Dolphin Books edition has now correctly printed your quotation.” In fine condition, with staple holes to the upper left corner.

This fascinating letter demonstrates Kennedy’s interest in military history and has an important connection to the impending war in Vietnam. Faced with the prospect of a communist threat in southeast Asia, Kennedy increased American involvement in Vietnam during this period—by the end of 1962 the US had dispatched twelve thousand military personnel to the region, a tenfold increase from the beginning of JFK’s presidency. Still, Kennedy hoped to avoid combat. In comparison to Lawrence’s fight in the Arab Revolt, the roles were reversed—he had led the insurgency against a superpower, while in this case America was the superpower. Perhaps it was Kennedy’s study of Lawrence’s success that made him hesitant to engage in guerilla warfare in Vietnam. He eventually initiated a resolution to bring home 1,000 'advisors' from Vietnam by December 1963, and to remove all 'advisors' by 1965. It was not until JFK was out of office that Vietnam wildly escalated, and the guerilla war indeed proved disastrous.