"Incredible [artistic] efforts” have come to nothing: “What have I come to, complete defeat...Maybe I don’t have any talent but (all vanity aside)" 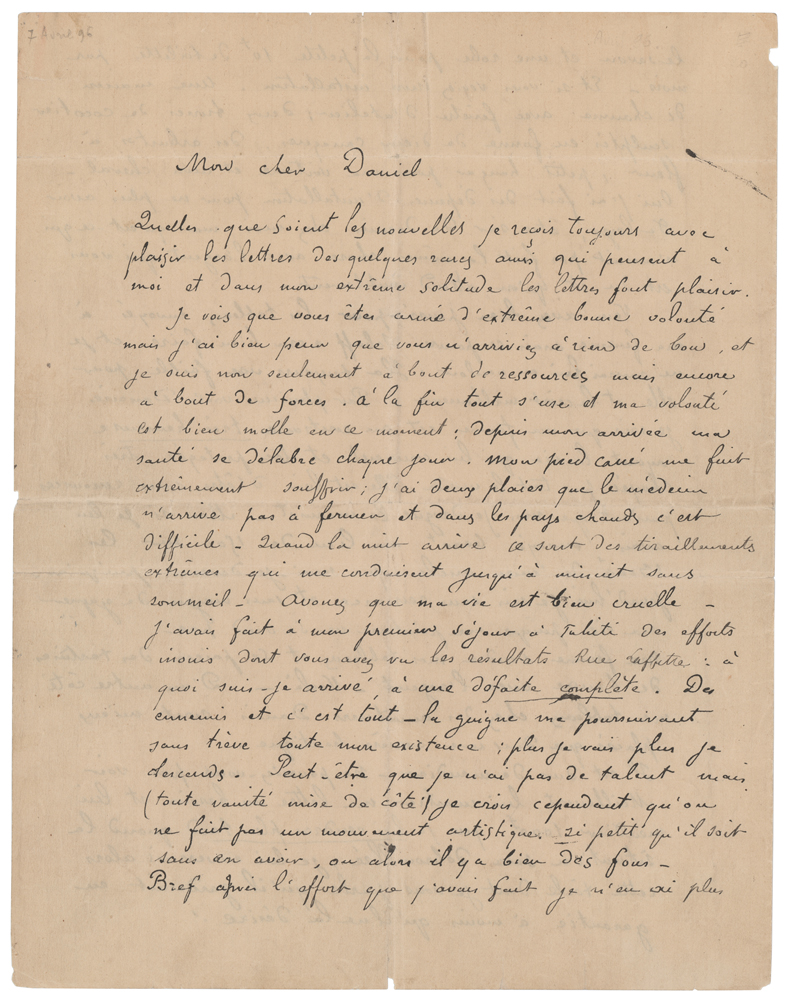 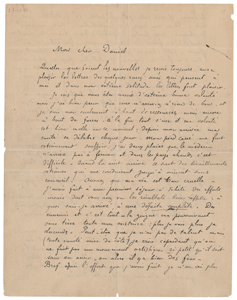 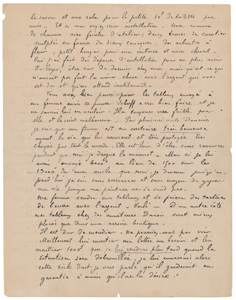 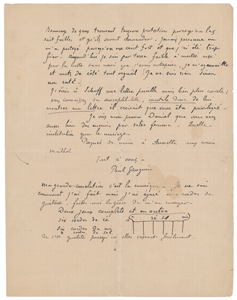 "Incredible [artistic] efforts” have come to nothing: “What have I come to, complete defeat...Maybe I don’t have any talent but (all vanity aside)"

ALS in French, three pages on two sheets, 8.25 x 10.5, April 7, 1896. Letter to his friend, confidant, and fellow painter George-Daniel de Monfreid, who was one of the first collectors of Gauguin's art during his exile in the Pacific, and one of his earliest biographers.​ This letter provides evidence of Gauguin's increasingly poor physical and mental state during his second residence in Tahiti. Gauguin displays a self-pitying disposition, informing his friend that his goodwill will achieve nothing. The leg he broke [in Concarneau, Brittany] is causing him a great deal of pain and sleepless nights, and he complains that his "incredible [artistic] efforts" have come to nothing: "What have I come to, complete defeat…Maybe I don't have any talent but (all vanity aside) I still believe that you don't make an artistic movement however small it is without having it, or there are a lot of crazy people."

He discusses several paintings he sent to his ex-wife [Mette-Sophie Gad] and suggests that his friend "Schuff" [Émile Schuffenecker] still has a weakness for her. She's "very happy having the life that suits her and very protected, very pampered by everyone. She's far from helpless while I'm on drugs." He pleads for his friend's help in securing a loan from Meilleurat, offering to send a canvas as a guarantee until the debt is repaid. Gauguin bemoans that "No one ever protected me because I was believed to be strong and I was too proud. Today I am on the ground, weak, half worn out from the merciless struggle I had undertaken, I kneel down and put all pride aside. I am nothing but a failure." He ends the letter by explaining that music is his "great consolation," asking Monfreid to send him guitar strings to replace those he's lost: he adds an explanatory sketch of the required strings at the conclusion.

While painting in Concarneau in 1894, Gauguin became involved in a brawl, during which he broke his ankle. The injury would plague him for the rest of his life and resulted in him walking with a slight limp. He was constantly in pain, relying on pills to relieve the symptoms, and spending days in bed. On his return to France from his first Tahitian trip in 1893, there were some hopes of a reconciliation with his wife Mette. By 1895 these had vanished after financial quarrels. Gauguin initially refused to share any part of a 13,000-franc inheritance from his uncle Isidore, but eventually gifted her a paltry 1,500 francs. Mette was outraged and from that point forward, insisted on keeping in contact with him only through Schuffenecker—this was doubly galling for Gauguin, as his good friend witnessed first hand the true extent of his betrayal. Gauguin attempts to defend his actions in this letter, arguing that "if I had sent 6,000 francs instead of 1,500 out of my uncle's 13,000 francs, what would have happened to me since today I am without resources and without the means to earn a living since my painting cannot be sold." Furthermore, it's interesting to note that Gauguin was a keen guitarist; his oil painting, The Guitar Player, was rendered in Paris, 1894. In fine condition, with some small edge chips, and several light stains to the final page, one of which just touches the end of the signature.