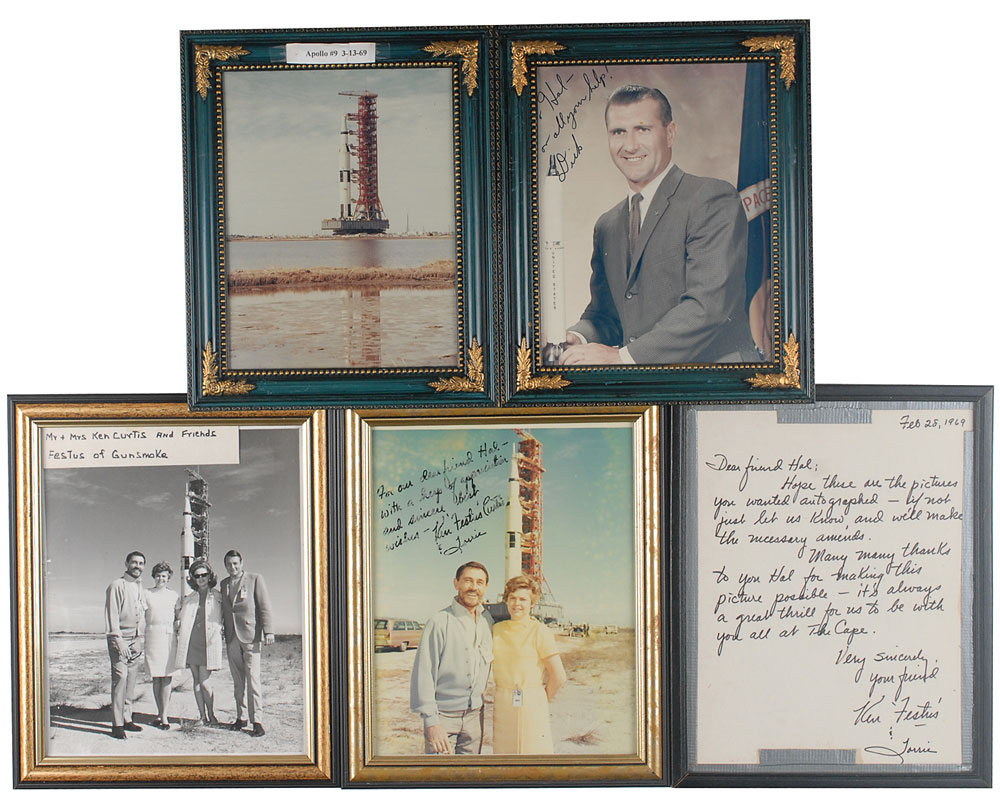 Diverse collection of items belonging to former Apollo program Chief of Mission Support Harold Collins, including: two commemorative covers, individually signed in black felt tip by Alan Shepard and Bill Anders, honoring the tenth anniversary of Shepard becoming the first American in space and the Apollo 8 mission, mounted and framed to an overall size of 12.75 x 15.5; a color 6.5 x 8.5 photo of Richard Gordon posing in a suit and tie, signed and inscribed in black felt tip, “To Hal—For all your help! Dick,” framed to an overall size of 9 x 11; an unsigned color 6.5 x 8.5 photo of the Apollo 9 rocket prior to launch, framed to an overall size of 9 x 11; two TLSs to Collins, both dated March 1973, NASA letterhead, individually signed by Chief of the Astronaut Office Cyril E. Baker and STS-5 astronaut William B. Lenoir; an Apollo 11 mission report packet, 8.5 x 11, eight pages, dated August 14, 1969, featuring various images and statistics concerning the historic lunar landing; a set of ten 8.5 x 11 photos of the moon’s surface taken by the Ranger IX lunar probe during its mission in March of 1965; a set of eight color photos, ranging in size from 8 x 10 to 11 x 8.5, depicting the Ranger IX lunar probe; an unsigned color semi-glossy 10 x 8 candid photo of Deke Slayton conversing with an unidentified gentleman; an ALS signed by Gunsmoke actor Ken Curtis, dated February 28, 1969, and two photos of Curtis posing in front of a Saturn rocket, one signed and inscribed in black felt tip to Collins, each are individually framed to an approximate size of 9.5 x 11.5; and a pewter 1/293 scale model of a NASA space shuttle, measuring 5″ long, bearing a Danbury Mint engraving. In overall fine condition. A unique array of NASA-related items derived from the collection of Collins, a man who served an integral role in the success of America’s two most influential space programs—Mercury and Apollo. Provenance: Harold Collins Collection. Pre-certified Zarelli Space Authentication.