Jefferson as he pays for seven slaves, “I am in hopes you will have been able to procure me some” 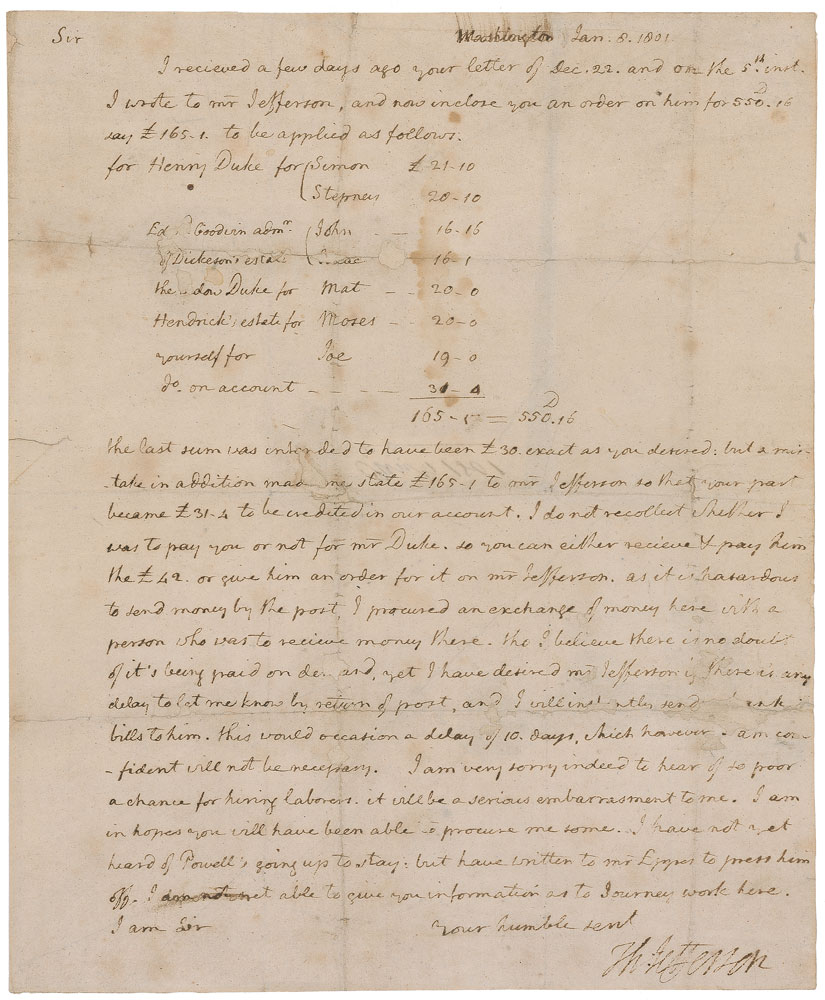 Jefferson as he pays for seven slaves, “I am in hopes you will have been able to procure me some”

ALS as vice president, signed “Th: Jefferson,” one page, 7.75 x 9.5, January 8, 1801. Letter to Richard Richardson, the overseer of Monticello. In full (spelling and grammar retained): “I recieved a few days ago your letter of Dec. 22 and on the 5th inst. I wrote to mr. [George] Jefferson and now inclose you an order on him for 550.16 D or say £165.1. to be applied as follows. for Henry Duke for: Simon—£21.10, Stepney—20.10, Ed[w]’d Goodwin adm’r of Dickeson’s estate: John—16.15, [Isa]ac—16.1, the [wi]dow Duke for Hendrick’s estate for: Mat—20.0, Moses—20.0, yourself for: Joe—19.0, d’o on account: 31.4, [totaling:] 165.5=550.16 D, the last sum was intended to have been £30 exact as you desired: but a mistake in addition mad[e] me state £165.1 to mr. Jefferson so that your part became £31.4 to be credited in our account. I do not recollect whether I was to pay you or not for mr. Duke, so you can either recieve & pay him the £42 or give him an order for it on mr. Jefferson. as it is hazardous to send money by the post, I procured an exchange of money here with a person who was to recieve money there. tho I believe there is no doubt of it's being paid on de[m]and, yet I have desired mr. Jefferson if there is any delay to let me know by return of post, and I will ins[tan]tly send [on ba]nk bills to him. this would occasion a delay of 10 days, which however [I] am confident will not be necessary. I am very sorry indeed to hear of so poor a chance for hiring laborers. it will be a serious embarrasment to me. I am in hopes you will have been able [t]o procure me some. I have not yet heard of Powell's going up to stay; but have written to mr Eppes to press him off. I am not yet able to give you information as to Journey work here.” Professionally silked on the reverse and in very good condition, with several areas of repaired papers loss, intersecting folds (one vertical fold passing through a single letter of the signature), and scattered soiling.

Of the slaveholders comprising America’s founding fathers, Thomas Jefferson held the most complex attitude toward the barbaric institution. He kept hundreds of slaves during his lifetime and was equally willing to rent slave labor from other owners, as is evident in this letter. The payments he discusses are renumeration for use of the seven men held as slaves—Simon, Stepney, John, Isaac, Mat, Moses, and Joe—due as rent to their owners. Five of these men are mentioned in The Slave Families of Thomas Jefferson, a comprehensive study published in 2007 by B. Bernetiae Reed. Although a great statesman, Jefferson was not a terribly astute businessman and this letter derives from a botched deal with John G. Craven, who had signed a lease for a plot of land on the Monticello estate in September 1800. One of the terms of the transaction was that Jefferson would build a house for him on the property and have several dozen acres of land cleared to be usable for planting. When Craven arrived on December 31, he was dismayed to find his house unfinished—walls were missing and it had no windows or doors—and the ‘cleared land’ was essentially untouched. In order to save himself from, as Jefferson says, “serious embarrasment [sic],” he urgently requested the managers of Monticello to rent slave labor from nearby owners. In light of their inability to do so, Jefferson ultimately directed his son-in-law Thomas Mann Randolph, who helped oversee the nailmaking blacksmith shop at Monticello, to divert all able-bodied slaves from their forges at the nailery—one of the most profitable ventures of the plantation—and tasked them with clearing the land promised to Craven.

Jefferson wrestled with the topic of slavery and despite engaging in the practice as a private citizen he was ardently against it in his political career. These struggles are found even in this instance, with Jefferson’s humanity revealed amidst an institutionalized inhumanity in both the land-clearing project and the real estate transaction with Craven. Within weeks of writing the present letter, after deciding to suspend work at the nailery in order to clear land, Jefferson followed up with Randolph on the subject and provided instructions for Gabriel Lilly—known as one of the most brutal supervisors at Monticello—writing, ‘I forgot to ask the favor of you to speak to Lilly as to the treatment of the nailers. it would destroy their value in my estimation to degrade them in their own eyes by the whip.’ In addition to the promise of cleared land, another item in the indenture with John H. Craven for lease of the property was that Jefferson would provide forty-eight of his slaves for Craven’s use. In that document, Jefferson also saw fit to add a stipulation as to their treatment, with Craven agreeing to ‘feed and clothe the Said Negroes well, & take care of them in Sickness, employing medical aid When necessary; & useing towards them no unreasonable Treatment.’ As a handwritten letter by Jefferson on the topic of slavery, dating to less than three months before taking office as the third president of the United States, this is an immensely desirable and historically important piece. Pre-certified PSA/DNA.