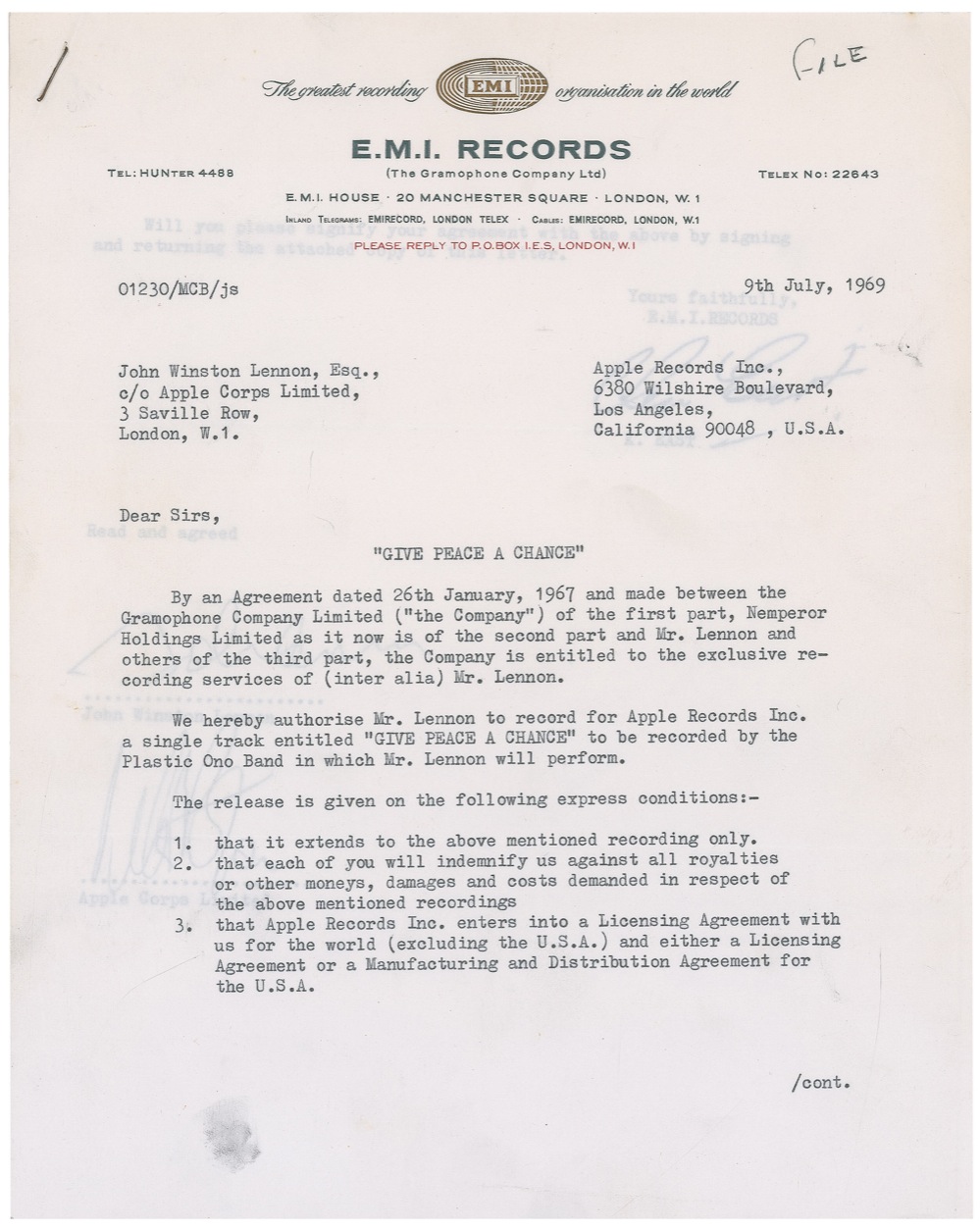 DS, two pages, 8 x 10, July 9, 1969. An agreement between E.M.I. Records and Lennon for the recording of 'Give Peace a Chance.' Document reads, in part: “Nemperor Holdings Limited as it now is of the second part and Mr. Lennon and others of the third part, the Company is entitled to the exclusive recording services of (inter alia) Mr. Lennon.

We hereby authorise Mr. Lennon to record for Apple Records Inc. a single track entitled “GIVE PEACE A CHANCE' to be recorded by the Plastic Ono band in which Mr. Lennon will perform.

The release is given on the following express conditions:

1. that it extends to the above mentioned recording only. 2. That each of you will indemnify us against all royalties or other moneys, damages and costs demanded in respect of the above mentioned recordings 2. That Apple Records Inc. enters into a Licensing Agreement with us for the world (excluding the U.S.A.) and either a Licensing Agreement or a Manufacturing and Distribution Agreement for the U.S.A.”

Signed on the second page in black ballpoint, “John Lennon,” as well as an Apple Corps executive and E.M.I.'s Ken East. Two horizontal mailing folds, a few light creases, a bit of trivial toning and soiling, and an office notation to top of first page, otherwise fine condition.

An important agreement designating the terms by which John Lennon's 'Give Peace A Chance' would be exclusively distributed and/or manufactured by Apple Records parent company, EMI Records. Significant as Lennon's first solo single release on Apple Records, the song is regarded as a peace anthem throughout the world and a benchmark achievement for Lennon's personal peace activism campaign that continues to be a significant part of his legacy.

The song was written during Lennon's Bed-In honeymoon, and when asked by a reporter what he was trying to achieve by staying in bed, Lennon answered spontaneously, ‘All we are saying is give peace a chance.’ He sang the song several times during the Bed-In. Finally, on June 1, 1969, in Room 1742 at the Queen Elizabeth Hotel in Montreal, André Perry recorded it using a simple setup of four microphones and a four-track tape recorder rented from a local recording studio. The recording session was attended by dozens of journalists and various celebrities, including Timothy Leary, Rabbi Abraham Feinberg, Joseph Schwartz, Allan Rock, Rosemary Woodruff Leary, Petula Clark, Dick Gregory, Allen Ginsberg, Murray the K, and Derek Taylor, many of whom are mentioned in the lyrics. Lennon played acoustic guitar and was joined by Tommy Smothers of the Smothers Brothers, also on acoustic guitar.

Lennon later stated his regrets about being ‘guilty enough to give McCartney credit as co-writer on my first independent single instead of giving it to Yoko, who had actually written it with me.’ However, it has also been suggested that the credit was a way of thanks to McCartney for helping him record ‘The Ballad of John and Yoko’ on short notice. Released in the UK on July 4, 1969, and three days later, on July 7, in the US, the song reached #2 in the UK Singles Chart and #14 on the Billboard Hot 100 in the US. The song quickly became the anthem of the anti Vietnam-war movement, and was sung by half a million demonstrators in Washington at the Vietnam Moratorium Day, on October 15. They were led by the renowned folk singer Pete Seeger, who taunted Nixon and Agnew between the choruses of protesters singing, naturally, ‘All we are saying…is give peace a chance.’ Pre-certified Roger Epperson/REAL and RR Auction COA.