John Wilkes Booth's signed personal copy of the play Lend Me Five Shillings, performed by him in 1858 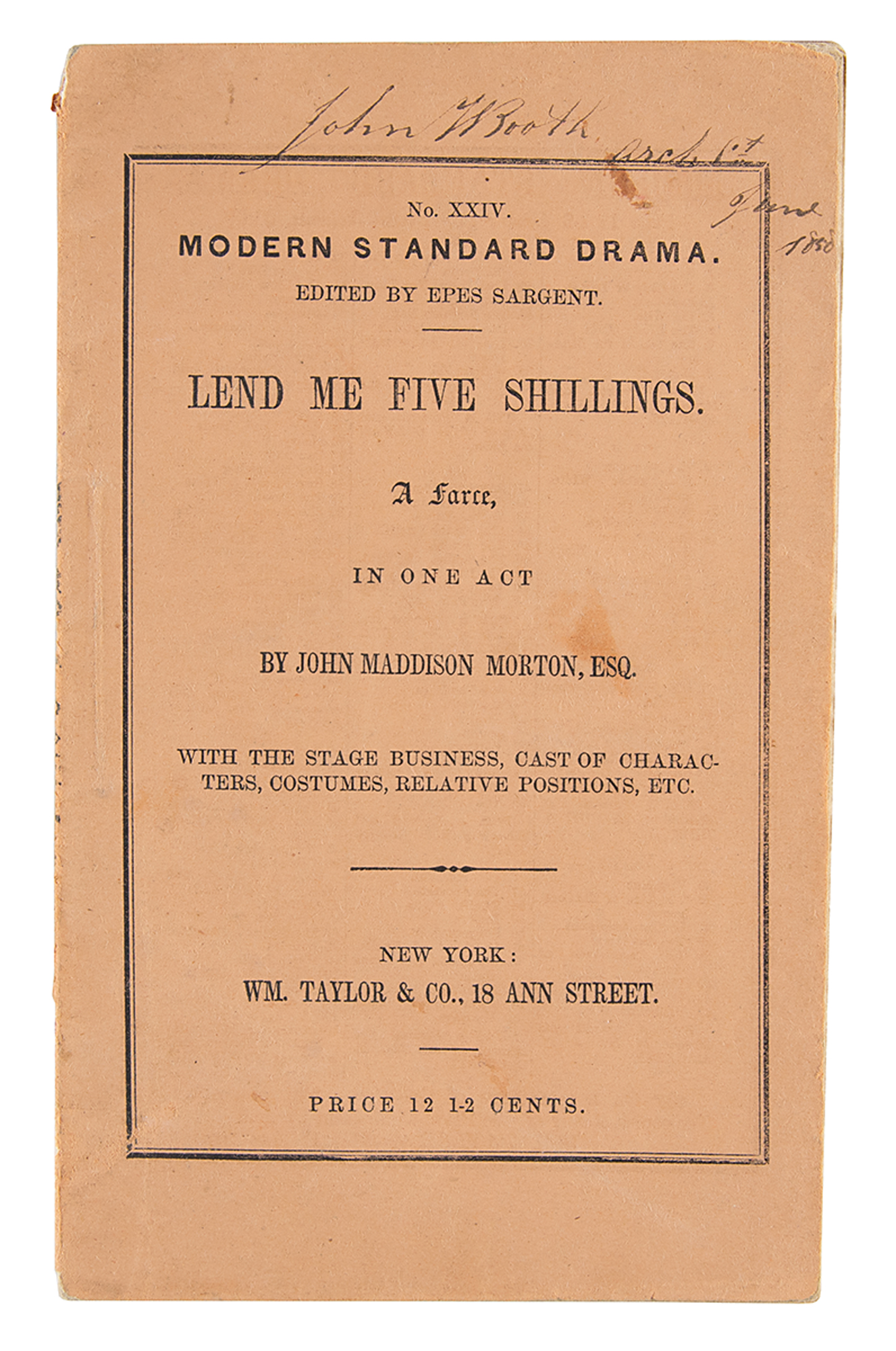 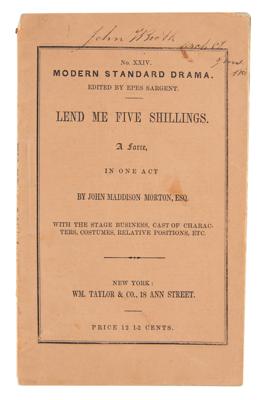 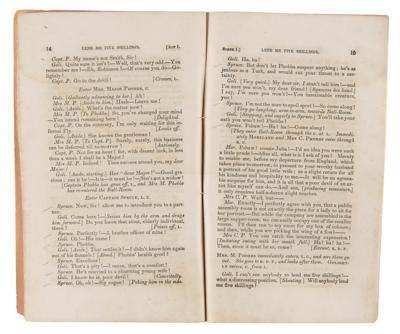 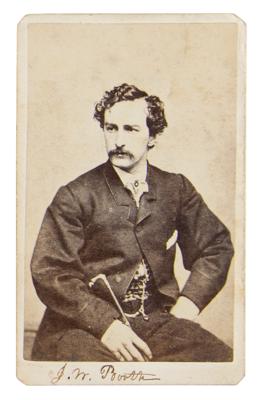 John Wilkes Booth's signed personal copy of the play Lend Me Five Shillings, performed by him in 1858

John Wilkes Booth's personal copy of the play "Lend Me Five Shillings, A Farce in One Act, by John Maddison Morton," neatly signed on the front wrapper in ink, "John W. Booth, Arch St., June 1858." Published in New York by William Taylor, [circa 1855-58?]. Bound in the publisher's original printed orange wrappers, 4.5 x 7.5, 31 pages. Booth performed in dozens of plays at Wheatley's Arch Street Theatre in Philadelphia from August 15, 1857, through June 19, 1858. This run included "Lend Me Five Shillings" on June 16 and 19, 1858, in which Booth played the secondary role of Captain Spruce. He did not usually mark up his scripts—although Spruce's lines are ticked off in pencil throughout this text—but he did sign and date the covers, as is evident here and in another script held by the Abraham Lincoln Presidential Library and Museum. The booklet is in very good to fine condition, with light staining to the interior pages, and small stains to the covers. Accompanied by a 2.25 x 4 carte-de-visite portrait—the most famous image of the Booth ever taken, showing the dashing actor clad in formal theater attire, with walking cane in his right hand—with an ink identification notation below, penned in an unknown hand. John Wilkes Booth always wanted to be famous—and he achieved that immortal notoriety, though not in the way he originally envisioned. Booth is rightly notorious for assassinating Abraham Lincoln, but it's sometimes forgotten that he was already a well-known actor. This script, signed by Booth, provides a small window into his life before 1865 and shows us a path he could have pursued had his personal politics not led him to murder. Here, with his personal copy of "Lend Me Five Shillings," we find the future assassin as an emerging star. Booth made his debut on stage at age 18 in 1855. Growing in popularity, he performed in 83 plays in 1858: among them were William Wallace and Brutus, having as their theme the killing or overthrow of an unjust ruler. Booth said that of all Shakespearean characters, his favorite role was Brutus, the slayer of a tyrant. In 1863, Booth performed for the first time at Ford's Theatre in Washington, taking the lead in The Marble Heart. Among his admiring audience was President Abraham Lincoln himself. Upon shooting Lincoln at Ford's Theater two years later, Booth reportedly borrowed from Brutus and shouted 'sic semper tyrannis'—'thus always to tyrants.' Booth was a firm white supremacist and showed an almost obsessive interest in the Civil War. Like many Confederate sympathizers, he viewed Lincoln as a tyrant and feared the war would transform America into a nation of racial equality—a reality that offended Booth so deeply that he threw away not only his career but ultimately his life to try and prevent its arrival. Who knew better than he how violence could move an audience? And what blood could stir the people more than that of a tyrant or a saint? Certainly, the murder could hardly have been more theatrically staged.