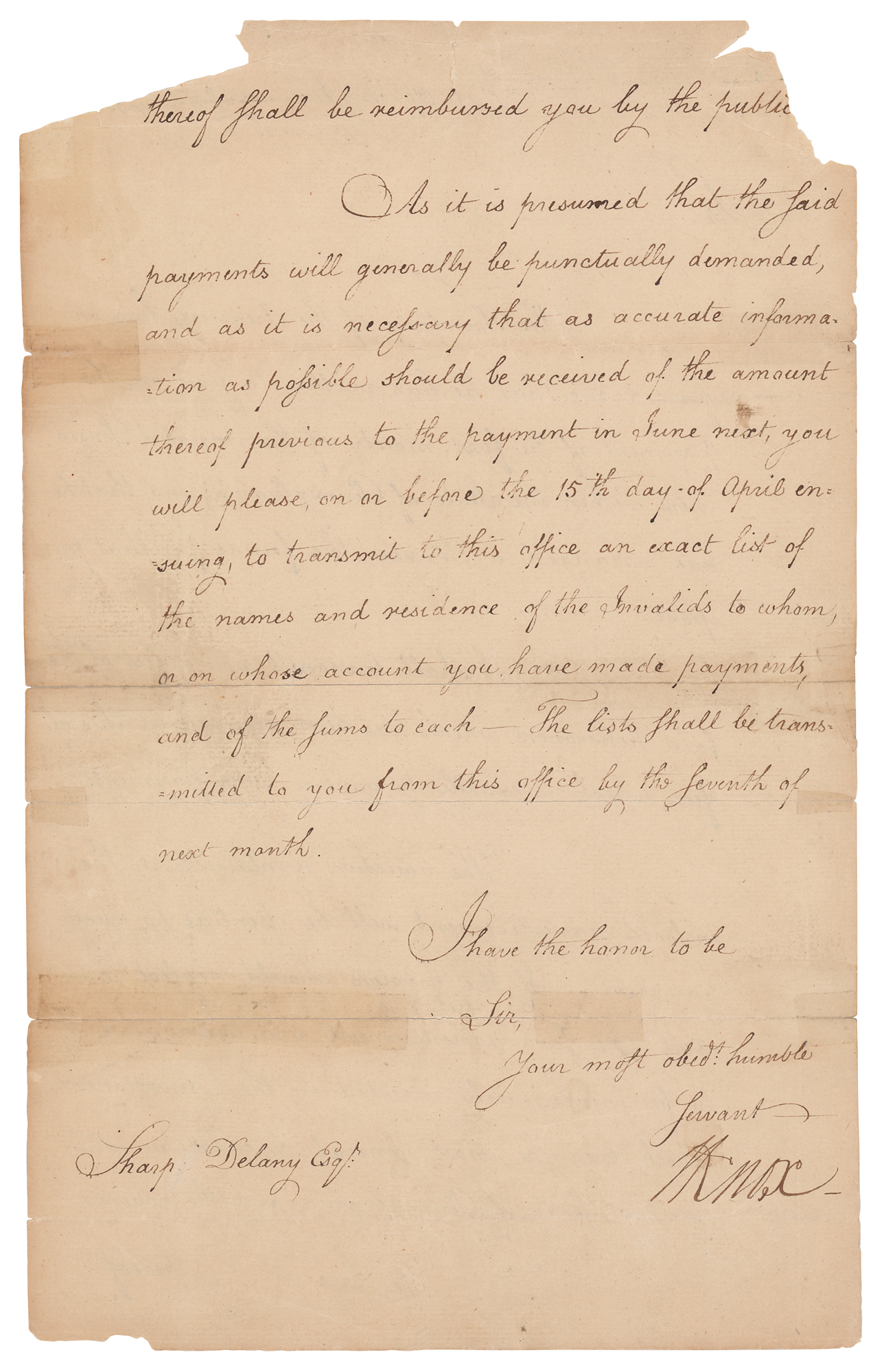 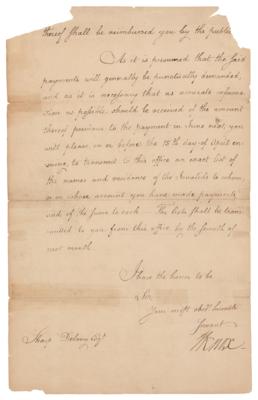 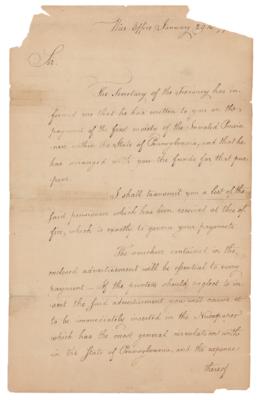 Revolutionary War general, first United States Secretary of War, and founder of the military school that became West Point (1750-1806). LS as Secretary of War, signed “H. Knox,” one page both sides, 7.75 x 12.5, January 29, [1790]. Official War Office letter to Revolutionary War veteran Sharp Delany, who was appointed by George Washington as first Collector of Customs in Philadelphia. In part: "The Secretary of the Treasury has informed me that he has written to you on the payment of the first moiety of the Invalid Pensioners within the State of Pennsylvania, and that he has arranged with you the funds for that purpose. I shall transmit you a list of the said pensioners which has been received at this office, which is exactly to govern your payments. The vouchers contained in the enclosed advertisement will be essential to every payment. If the printers should neglect to insert the said advertisement you will cause it to be immediately inserted in the Newspaper which has the most general circulation within the State of Pennsylvania, and the expence thereof shall be reimbursed you by the public." In very good condition, with edge tears and paper loss, and old tape repairs to nearly complete separations along very fragile horizontal folds.

In January 1790, President Washington looked to Secretary of the Treasury Alexander Hamilton to deal with the matter of an act that would continue stipends for invalid pensioners. Hamilton, in turn, worked and consulted with Secretary Knox on recommending to the president the appointment of agents for each state to manage the payment of invalid pensions. Knox wrote to Washington on January 26, 1790, affirming that Hamilton ‘submits it as his opinion that the persons whose names are stated on the enclosed paper would be the proper persons to pay the pensions to the said invalid pensioners.’ The name of Revolutionary War veteran Sharp Delany, who was recently appointed by Washington as the first Collector of Customs in Philadelphia, was included on the list Knox (and Hamilton) submitted to the president.

Tobias Lear, Washington’s personal secretary, replied to Knox the next day, January 27, 1790: ‘The persons stated on the paper enclosed in your letter, as being in the opinion of the Secretary of the Treasury, proper persons to pay the pensions to the invalid Pensioners…meet his idea; but the President wishes to see you upon this subject before anything is finally determined.’ On the same day, Washington noted in his diary that he did indeed meet with Knox ‘about nominating persons (named in a list submitted to me) for paying the Military Pensioners.’

Two days later, on January 29, 1790, Knox wrote this official War Office letter to Sharp Delany, confirming his communications with Hamilton and "the payment of the first moiety of the Invalid Pensioners within the State of Pennsylvania."