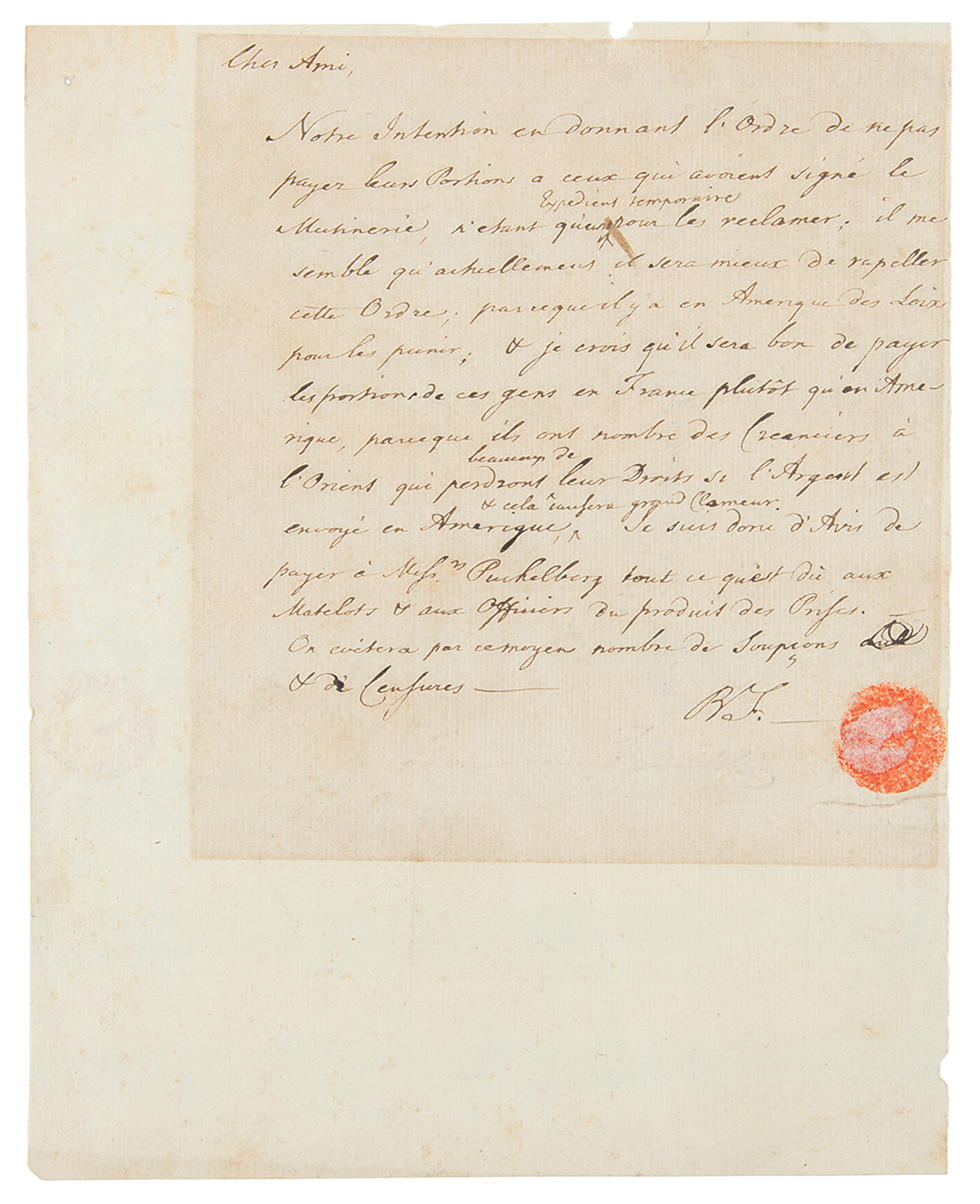 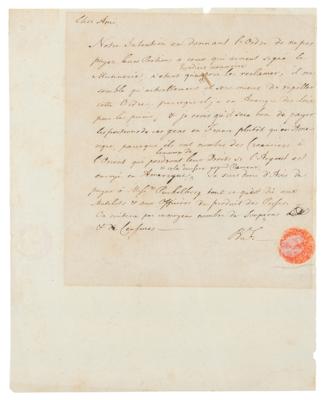 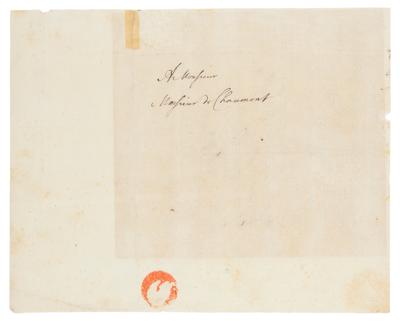 Previous Lot
Next Lot
Login or Register To Bid Add to BidTracker
Estimate: $75000+

Revolutionary War-era ALS in French, signed “B. F.,” one page, 7 x 9, no date but circa 1780. Handwritten letter by Benjamin Franklin to Jacques-Donatien Le Ray de Chaumont regarding the mutiny on board John Paul Jones's flagship, the USS Alliance. Le Ray de Chaumont was a wealthy and important French supporter of the American Revolution. In 1779, he had ordered that a merchant vessel be transformed into a warship, which he then gifted to the Americans as the USS Bonhomme Richard, placed under the command of John Paul Jones. During Jones's legendary battle against the HMS Serapis, the Bonhomme Richard was inexplicably fired on by a ship in his squadron, the USS Alliance, commanded by the half-mad Capt. Pierre Landais, who loathed Jones. Shattered, on fire, and leaking badly, the Bonhomme Richard sank about 36 hours later.

Franklin began an inquiry into the episode, and ordered Landais to relinquish his command of the Alliance to Jones until the matter could be settled. Meanwhile, Landais was persuaded that Franklin had no right to revoke a commission made by Congress. While Jones was occupied in Paris, Landais traveled to the port of Lorient, where the Alliance was preparing for its voyage home to America. Finding sympathizers amidst his old crew, Landais boarded the frigate, assumed command, weighed anchor, and put to sea. The French fleet prepared to intercept the mutinous crew and their ship, but Jones interceded and asked them to allow the ship to pass: he did not want to waste lives, lose the fine frigate, or strain Franco-American friendship by having French forces attack an American warship.

Although Alliance was allowed to leave France unmolested, the journey back to America was anything but routine. Landais quarreled with his officers, abused his men, shackled the former crew of the Bonhomme Richard in the rat-infested hold, and gave orders which violated the rules of safe and sensible seamanship. Fearful and exasperated, the crew finally judged him as insane, mutinied again, and forcibly relieved him of command. Court-martialed and found guilty upon his return to Boston, Landais was deemed unfit for command and ousted from service. Benjamin Franklin originally ordered that the Alliance crew not be paid for its trip to America, as he did not want to support mutineers. In this letter, however, he rescinds the order to withhold payment and opts to let the matter be dealt with in the American courts.

In part (translated): "Our intention, when we gave the order not to pay their shares to those who had signed the mutiny, was only a temporary expedient in order to reclaim them. It looks like, right now, it is better to recall this order, because there are American laws to punish them…it will be better to pay these people in France rather than in America because they owe money to a lot of people who will lose their rights if the money is sent to America, and this will bring complaints. In my opinion it is better to give to…all that is due to the sailors and officers…In this manner suspicions and criticism will be avoided." In fine condition, with a trivial chip to the top edge, and light toning from prior display. An important handwritten letter by Ben Franklin, demonstrating his diplomatic finesse in a case of drama on the high seas during the American Revolution.