Van Gogh quotes from Longfellow: "Shadows are trailing / My heart is bewailing / And toiling within / Like a funeral bell" 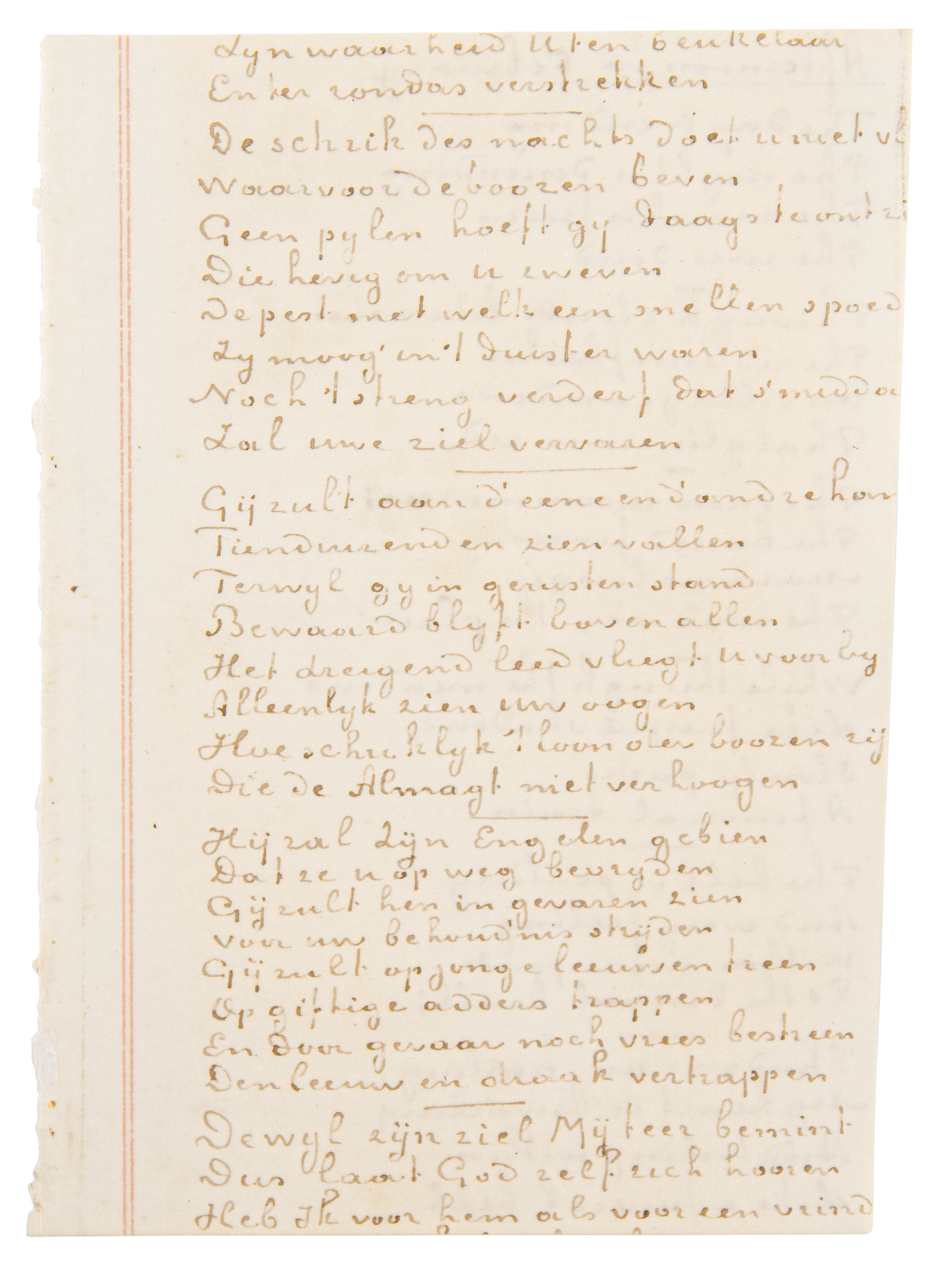 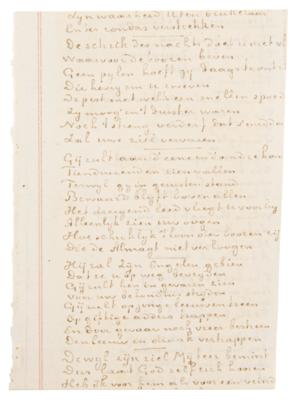 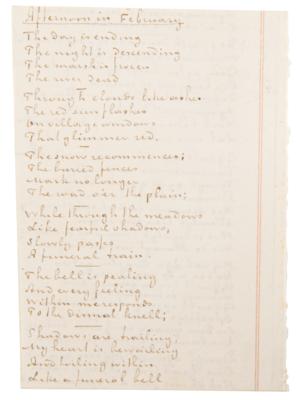 Van Gogh quotes from Longfellow: "Shadows are trailing / My heart is bewailing / And toiling within / Like a funeral bell"

Extraordinary unsigned handwritten manuscript by Vincent Van Gogh, one page both sides, 2.75 x 3.75, no date but circa late 1876. Van Gogh, an avid reader, transcribes two poems: one, "Afternoon in February" by Henry W. Longfellow, contains six stanzas of four lines each; on the reverse, he pens a fragment of unidentified religious verse in Dutch, totaling 29 lines. The Longfellow verse, in part:

Shadows are trailing
My heart is bewailing
And toiling within
Like a funeral bell."

On the reverse is a religious verse in Dutch, in small part: "As a shield and buckler Your truth is offered to me…Because His soul loves me dearly That is why God allowed Himself to come here." In fine to very fine condition, with closely cropped edges.

An insatiable reader throughout his life, Vincent van Gogh was literate in Dutch, English, German, and French. He counted Dickens, Zola, Shakespeare, and Maupassant among his favorite authors, and also held special esteem for Henry Wadsworth Longfellow—in letters to his brother Theo, Vincent refers to several of the American poet's works, mentioning Tales of a Wayside Inn and quoting from poems including 'The Saga of King Olaf’ and 'The Light of Stars.' The quotation here boasts highly visual appeal, evoking the glimmering red sun and trailing shadows at dusk—elements one might expect to see in one of van Gogh's paintings. Vincent's favorite literature guided his thoughts, defined his worldview, and influenced his art. A recent study of his reading, Vincent's Books: Van Gogh and the Writers Who Inspired Him by Mariella Guzzoni, was published in 2020.

The religious text here offers insight into van Gogh's spiritual preoccupations during a period in which he became increasingly fervent, immersing himself in religion while becoming pious and monastic. In 1877, shortly after writing these texts, he went to live with his uncle, the theologian Johannes Stricker, to prepare for the University of Amsterdam's theology entrance examination. He failed that exam and proceeded to fail a three-month course at a Protestant missionary school. He was able to find work as a missionary in Belgium in 1879, but was soon dismissed for 'undermining the dignity of the priesthood.' He finally would turn to art in the early 1880s, introduced to oil paints by his cousin Anton Mauve.

In April 2020, Martin Bailey of The Art Newspaper traced the lineage of this van Gogh fragment—and several others—back to an album that had been owned by Annie Slade-Jones, van Gogh’s landlady in Isleworth, where he lived while working as a teacher from October to December 1876. Van Gogh filled six of the album's pages with writings drawn from published sources, including poetry, passages from the Bible, hymns, and literary writings. They were subsequently sliced up—probably sometime in the 1980s—and dispersed to collectors and collections around the globe. About half of the texts are today held by the Getty Research Institute in Los Angeles, and the whereabouts of several others are unknown. A remarkable and fabulous handwritten piece by the legendary painter, perhaps his closest association with America.