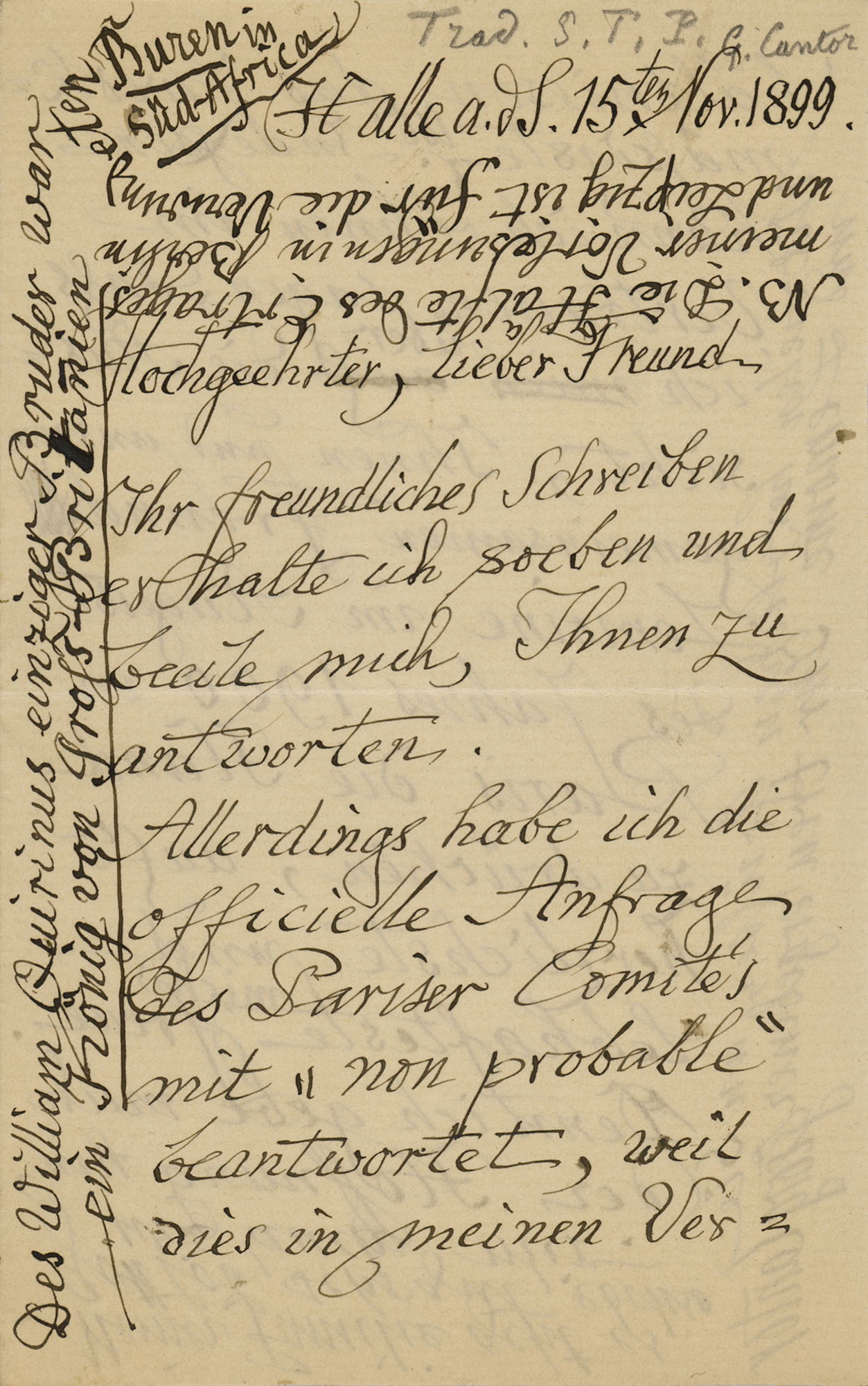 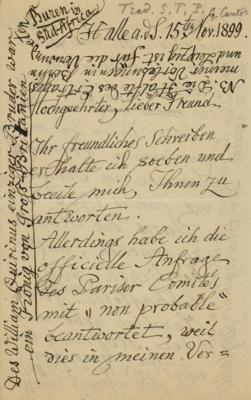 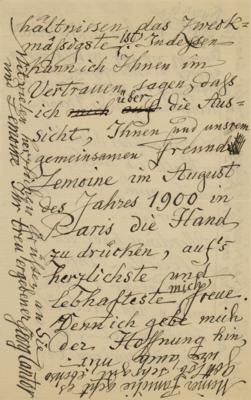 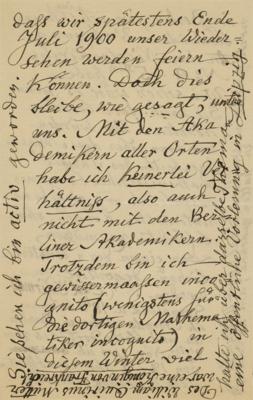 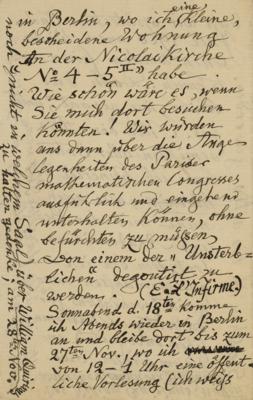 German mathematician (1845-1918) who created set theory, which has become a fundamental theory in mathematics. Cantor established the importance of one-to-one correspondence between the members of two sets, defined infinite and well-ordered sets, and proved that the real numbers are more numerous than the natural numbers. Extremely rare and important ALS in German, four pages on two adjoining sheets, 4 x 6.5, November 15, 1899. Handwritten letter to fellow mathematician Charles-Ange Laisant, mentioning the forthcoming second International Congress of Mathematicians in Paris, during which David Hilbert would announce his famous list of 23 unsolved mathematical problems. In part (translated): "As regards the official question of the Parisian committee, I have already replied 'unlikely,' because it fits best my situation. However, I can confidentially tell you that I heartily and in the liveliest way rejoice to shake hands with you and our common friend Lemoine in August 1900, for I hope that, at the end of July 1900 at the latest, we will be able to celebrate our reunion. But let this remains between us, as I said. I do not have any relationship with academicians of any country, nor with those in Berlin. Nevertheless, I shall be this winter incognito, so to speak (at least as regards the local academicians), a long time in Berlin, where I have a small house at Church Saint-Nicolas no. 4-5 bis. How happy it would be should you be able to visit me! We could talk freely, about the Congress of Mathematicians in Paris, without having to fear to be disgusted by the presence of one of the ‘Immortals’ (E. L’Infirme). On Saturday 18 November, I shall go to Berlin and stay there until 27 November, when I plan to give (from noon to 1 p.m.) a public conference (I do not know in which room) about William Quirinus. On 28 November, I have to give a public conference in Leipzig about the same topic. You see that I have remained active. The mother of William Quirinus was Queen of France! William Quirinus’s only brother was King of Great Britain. Half of the proceeds from my conferences in Leipzig and Berlin will be given to the Boers injured in South Africa." In fine condition.

Cantor had been granted leave from teaching for the winter semester of 1899-1900. Although he continued his mathematical activity, he also devoted part of his time to work on his Bacon-Shakespeare theory. This is the subject of the lectures about 'William Quirinus' which he mentions in this letter. Cantor’s had published 'Resurrectio divi Quirini Francisci Baconi...' in 1896. His belief in this theory and the time he spent advocating it can be seen as a testimony to his shaken mental health. A few months before this letter, Cantor’s younger brother had died. However, the greatest blow would come a few weeks after this letter, with the sudden death of Cantor’s son on 16 December 1899. From then and until the end, Cantor’s life would be blighted with mental illness and depression.

Cantor played a prominent role in establishing the International Congress of Mathematicians. He is credited, along with Felix Klein, with putting forward the idea of such a congress in the 1890s. The recipient of this letter, Charles-Ange Laisant (1841-1920), was a French mathematician and politican. In 1888, he served as President of the Société Mathématique de France.