Evoking the great rivalries of the electric age, Tesla insists his wireless technology is superior to Marconi's: "I am now looking with full confidence to the establishment of a communication with the European continent" 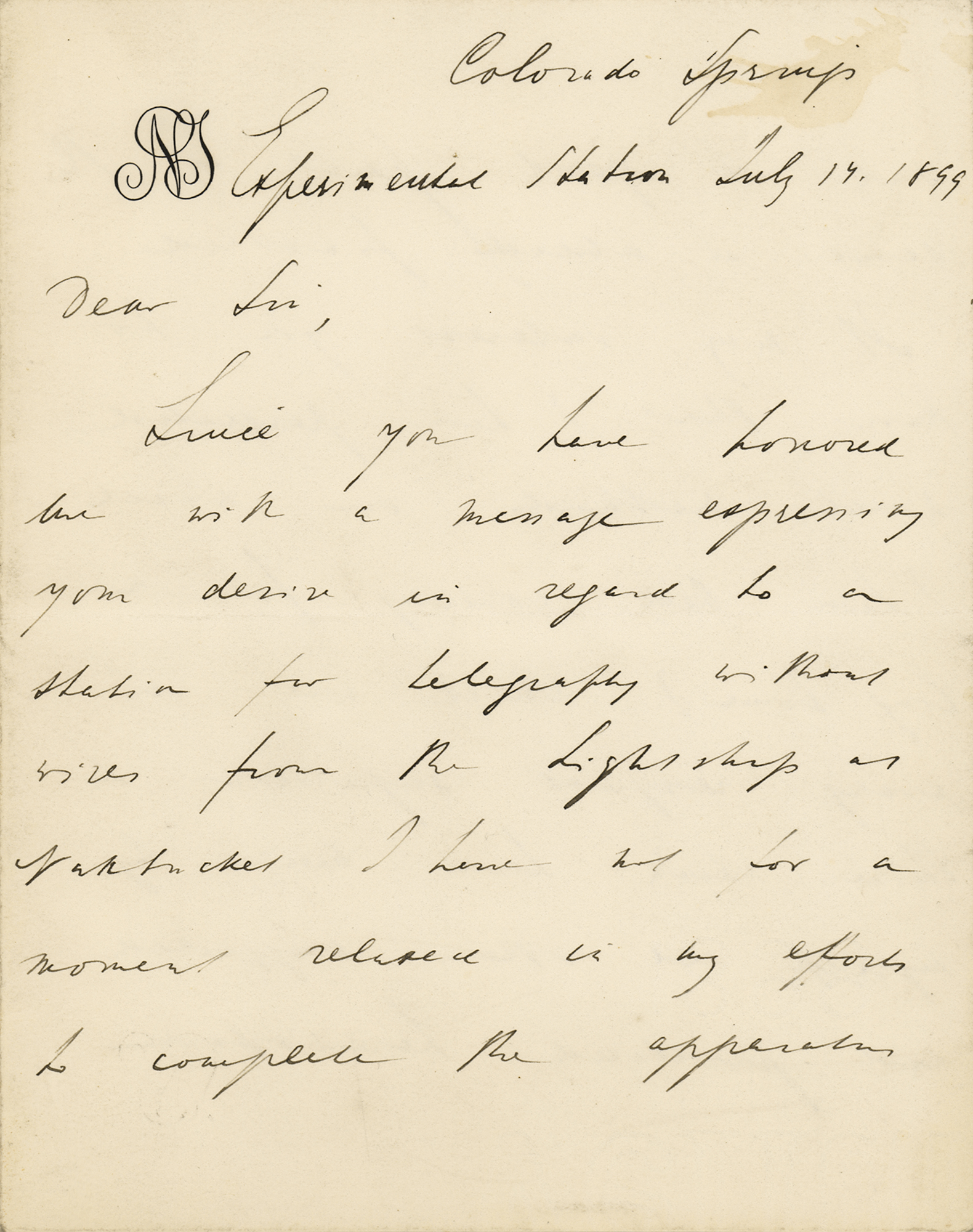 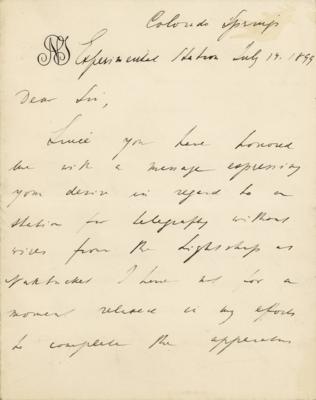 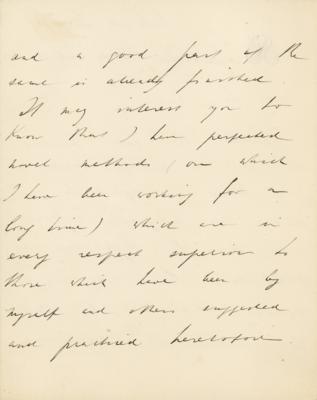 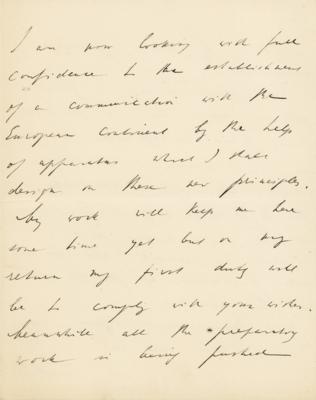 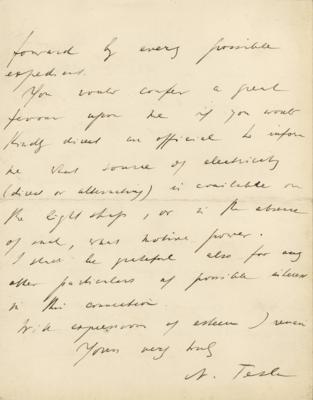 Evoking the great rivalries of the electric age, Tesla insists his wireless technology is superior to Marconi's: "I am now looking with full confidence to the establishment of a communication with the European continent"

ALS signed “N. Tesla,” four pages on two adjoining sheets, 5.25 x 6.75, personal monogram letterhead, July 14, 1899. Handwritten letter to Rear Admiral Francis J. Higginson by Nikola Tesla, penned from his "Colorado Springs Experimental Station," in part: "Since you have honored me with a message expressing your desire in regard to a station for telegraphy without wires from the lightship at Nantucket I have not for a moment relaxed in my efforts to complete the apparatus and a good part of the same already finished. It may interest you to know that I have perfected novel methods (on which I have been working for a long time) which are in every respect superior to those which have been by myself and others suggested and practiced heretofore. I am now looking with full confidence to the establishment of a communication with the European continent by the help of apparatus which I shall design on these new principles…You would confer a great favour upon me if you would kindly direct and official to inform me what source of electricity (direct or alternating) is available on the lightship, or in the absence of such, what motive power." In fine condition, with a tiny stain to the upper right of the first page.

In May, Higginson had written to Tesla on the subject of wireless telegraphy, asking if he would be able to develop a system to be deployed on Light-Vessel No. 66, Nantucket Shoals, Mass., lying about 60 miles south of Nantucket Island. In spite of Tesla's initial interest, the plan would not come to fruition—the Navy refused to finance the project, and also found Tesla rather difficult to work with. Higginson continued to advocate for wireless communications technology within the government, and in 1901 Marconi wireless telegraph equipment was 'temporarily and experimentally installed' on the Nantucket lightship. In 1904, it would become the first US lightship to be permanently equipped with radio—though not of Tesla's design.

Nikola Tesla had arrived in Colorado Springs earlier in May, and he spent the summer conducting experiments related to both wireless telegraphy and power transmission. It was during this period that he reported hearing unusual, rhythmic sounds from his receiver. In a letter to Julian Hawthorne, Tesla contended that these signals were evidence that 'intelligent beings on a neighboring planet' must be scientifically more advanced than Earthlings. It has since been hypothesized that Tesla may have intercepted Marconi's European experiments in July 1899—Marconi may have transmitted the letter S (dot/dot/dot) in a naval demonstration, the same three impulses that Tesla hinted at hearing in Colorado—or signals from another early experimenter in wireless transmission.

Tesla alludes to his rivalry with Marconi in this significant letter, asserting that he has now perfected novel methods which are superior to those previously promulgated by himself and others. Marconi was his chief competitor in this area at the time. Further, his inquiry about the ship's power supply, whether "direct or alternating," is noteworthy as a question associated with the 'current wars.' Tesla was an advocate for alternating current, while Thomas Edison was a supporter of direct current. In both cases, Tesla would become embroiled in lengthy legal battles over patent infringement with his competitors. Rife with content related to the great rivalries of the early electric age, this is a fabulous autograph letter by the celebrated innovator.