Alfred Russel Wallace weighs in on the new evolutionary theory: "If distinct races can be formed—and ultimately distinct species—by modifying the conditions under which plants or animals live...then Lamarck was right, and we must greatly modify our conception of the mode of evolution" 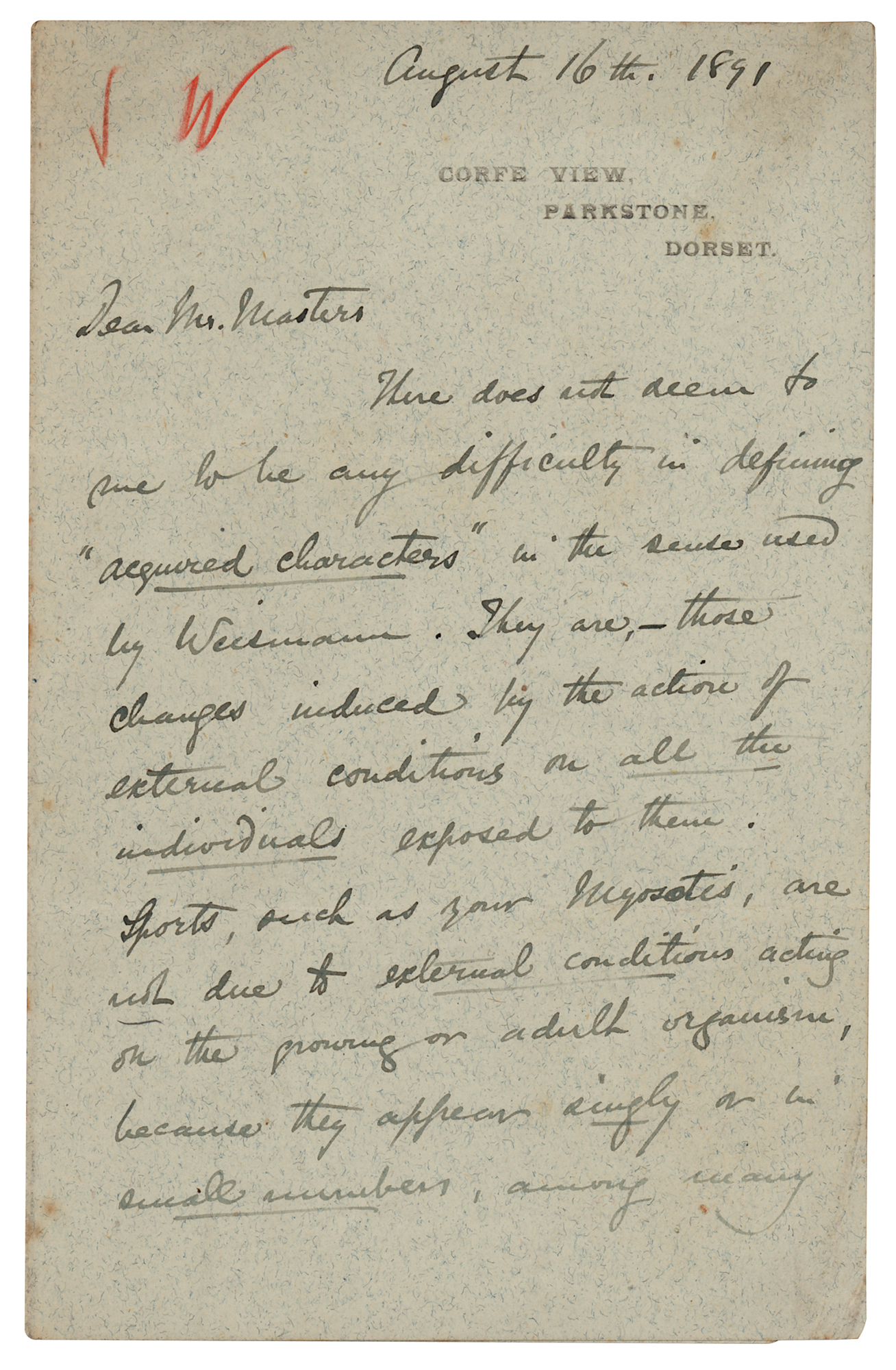 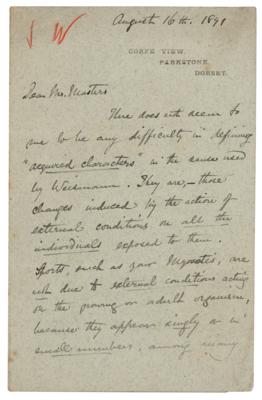 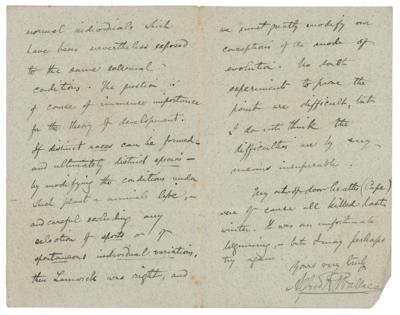 Alfred Russel Wallace weighs in on the new evolutionary theory: "If distinct races can be formed—and ultimately distinct species—by modifying the conditions under which plants or animals live...then Lamarck was right, and we must greatly modify our conception of the mode of evolution"

British naturalist, explorer, and biologist (1823-1913) best known for proposing a theory of natural selection which prompted Charles Darwin to publish his own. Important ALS signed “Alfred R. Wallace,” three pages on two adjoining sheets, 4.5 x 7, Corfe View letterhead, August 16, 1891. Handwritten letter to English botanist and taxonomist Maxwell T. Masters, in part: "There does not seem to me to be any difficulty in defining 'acquired characters' in the sense used by Weismann. They are,—those changes induced by the action of external conditions on all the individuals exposed to them. Sports, such as your Myosotis, are not due to external conditions acting on the growing or adult organism, because they appear singly or in small numbers, among normal individuals which have been nevertheless exposed to the same external conditions. The question is of course of immense importance for the theory of development. If distinct races can be formed—and ultimately distinct species—by modifying the conditions under which plants or animals live—and careful excluding any selection of sports or of spontaneous individual variations, then Lamarck was right, and we must greatly modify our conception of the mode of evolution. No doubt experiments to prove the point are difficult, but I do not think the difficulties are by any means insuperable." In fine condition.

Like most naturalists of the era, Wallace began his scientific career as a believer in the Lamarckian notion that individually acquired characters might be passed along from parents to their progeny. Even Darwin believed that the inheritance of acquired traits could be a source of variation upon which natural selection acted. However, experiments in succeeding years—conducted by the likes of Francis Galton and August Weismann—began to show that this was not to be the case.

Weismann became one of the first biologists to deny Lamarck's ideas entirely. His experiments focused on the inheritance of mutilation: beginning with 68 white mice, he removed their tails repeatedly over the course of five generations. Of the 901 young mice produced, not a single one was born without a tail (or even with a shorter tail). Thus was the death knell of Lamarckism.

In this letter, Wallace remains on the cutting edge of evolutionary theory, explaining the difference between acquired traits (which are not inherited) and 'sports,' or singular variations, whose characteristics may be. He goes on to suggest that further experiments, under strictly controlled conditions, could prove or disprove the new evolutionary theory once and for all. A remarkable letter on an important scientific subject.

This item is Pre-Certified by PSA/DNA
Buy a third-party letter of authenticity for $35.00