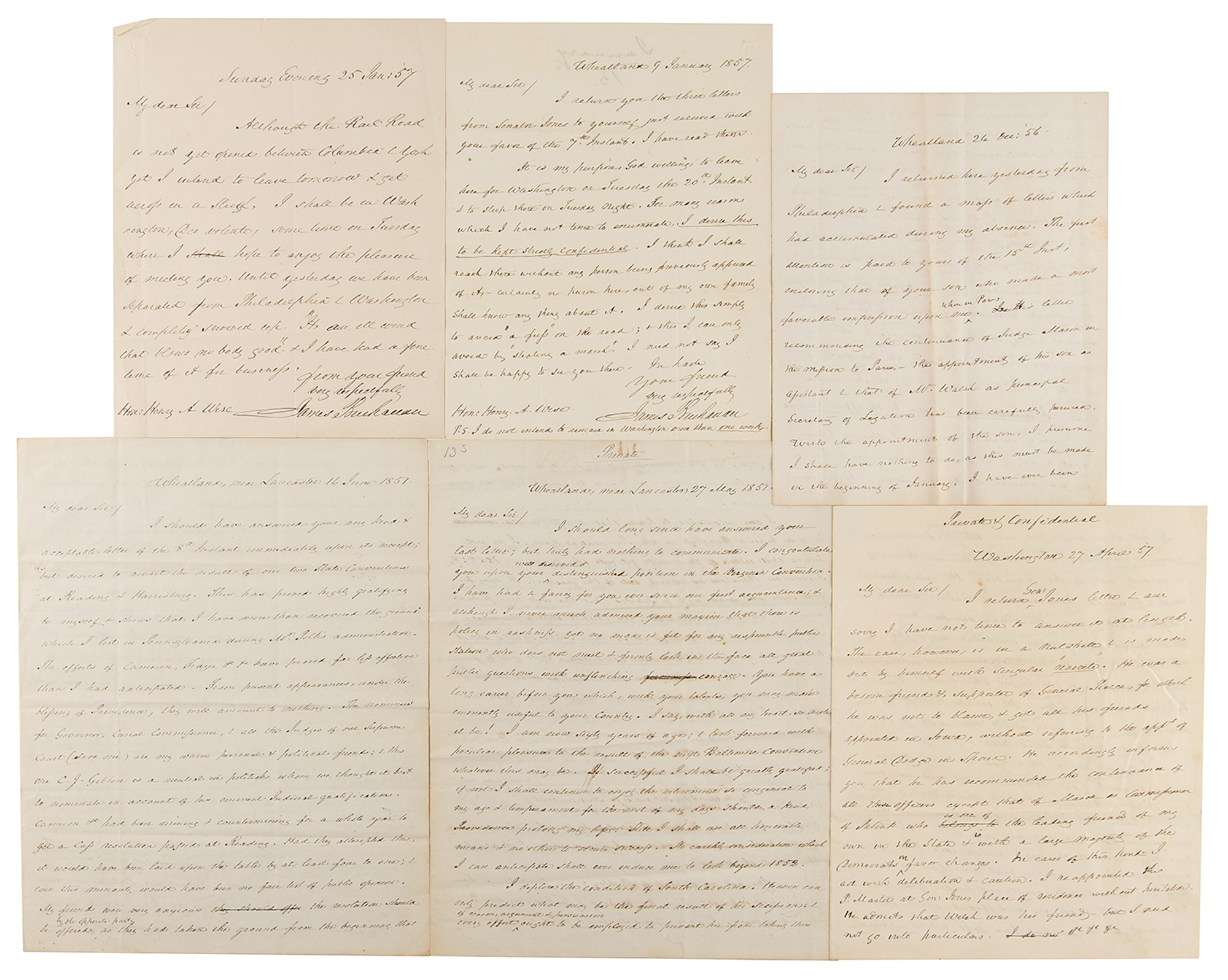 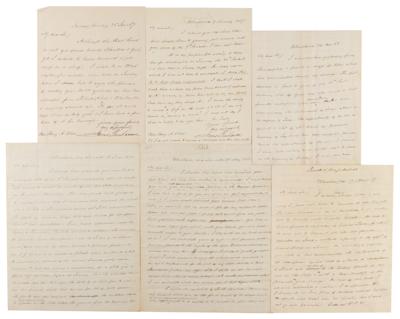 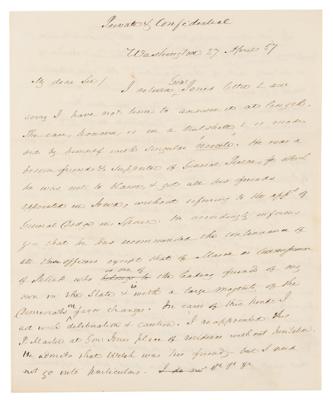 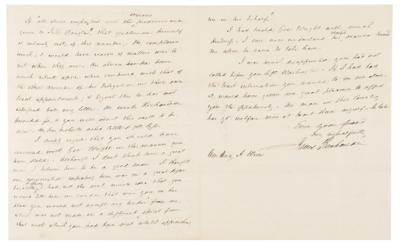 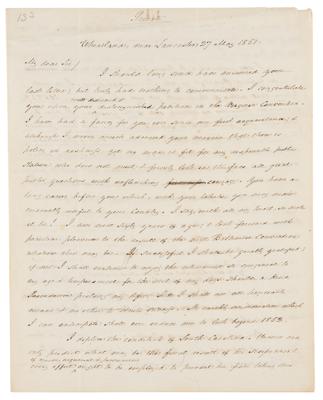 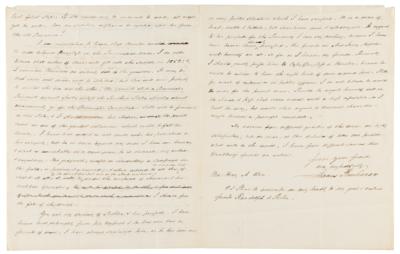 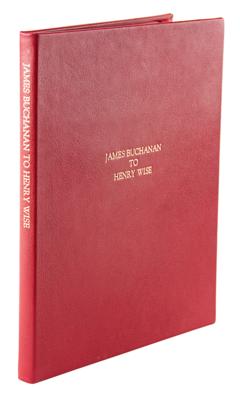 Archive of six important ALSs by James Buchanan, including one as president and three as president-elect, totaling 16 pages, ranging in size from 6.5 x 7.75 to 8 x 10, dated from 1851 to 1857. All to the Virginian politician Henry A. Wise, with significant commentary on secession and the antebellum state of the Union, presidential politics, and diplomatic appointments. Excerpts from the archive:

May 27, 1851, with important remarks on secessionists, electoral politics, and the candidacy of Winfield Scott: "I congratulate you upon your distinguished position in the Virginia Convention. I have had a fancy for you ever since our first acquaintance & although I never much admired your maxim that there is policy in rashness, yet no man is fit for any responsible public station who does not meet and look in the face all great public questions with firmly unflinching courage. You have a long career before you which, with your talents, you may make eminently useful to your Country. I say with all my heart, so make it be! I am now sixty years of age; I look forward with particular pleasure to the result of the next Baltimore Convention whatever that may be. If successful I shall be greatly grateful; if not I shall continue to enjoy the retirement so congenial to my age & temperament for the rest of my days should a kind Providence prolong my life…I deplore the condition of South Carolina. Heaven can only predict what maybe the final result of her Secessionists; every effort of reason, argument & persuasion ought to be employed to prevent her from taking the last fatal step. If she could only be induced to wait, all might yet be well…I am astonished that Hunter would…ride behind Douglas in the Presidential race. I do not believe that either of them will get into the saddle in 1852 & I consider Houston as entirely out of the question. It may be that some new man will be selected, but this will probably be neither one nor the other. We cannot elect a Democrat President against Scott unless the Southern States should almost unanimously go for the Democratic Candidate. Scott will be formidable in this state & I should consider his election, the present crisis as one of the great calamities which could befall the country. I know him well & do not doubt either his patriotism nor his integrity; but he is vain beyond any man I have ever known & what is remarkable in a vain man he is obstinate, self-willed & unyielding. His judgement, except in conducting a campaign in the field, is perverse and unsound & when added to all this, if elected at all, it will be by the Whigs and Free Soil vote of the North combined & under the auspices of Seward & his prospects. I should fear the fate of the Union."

June 16, 1851, commenting on his presidential odds and offering words of encouragement: "I should have answered your very kind & acceptable letter of the 8th instant immediately upon receipt but desired to await the result of our two State Conventions at Reading & Harrisburg. This has proved highly gratifying to myself & shows that I have more than recovered the ground which I lost in Pennsylvania during Mr. Polk's administration…I regard your voluntary pledge to support me with feelings that I shall not attempt to express. Had you been a member of the last Baltimore Convention, Virginia would not, I am persuaded, have deserted me & then perchance I might have received the Nomination. I should most certainly have been elected, had the result depended upon Pennsylvania. I might not, however, have carried all the States which General Cass did. Never were greater exertions made for one Candidate, than we in Pennsylvania made for General Cass in 1848: but it was an uphill effort from the beginning…You say if you acquire any fame you have a knack of throwing it away & that you care for nothing. Now this is all wrong. I have never flattered you, nor shall I do so in this occurrence…You possess the talent & ability to enable you to render most important services to your Country at this perilous crisis; & to place yourself high in the temple of fame. Above all you possess energy of character & a strong and determined will, without which a public man is comparatively nothing. Acquire more character and moderation & under the blessing of Heaven, you may be almost anything in this Country which you desire."

December 26, 1856, as president-elect, regarding a letter from Wise's son and diplomatic appointments: "His letter recommending the continuance of Judge Mason in the mission to Paris—the appointment of his son as assistant & that of W. Walsh as Principal Secretary of Legation has been carefully procured. As to the appointment of the son…I have ever been opposed to placing a father & a son as Minister & Secretary in the same Legation…As to the Judge himself…I have been greatly embarrassed in reconciling my very warm personal friendship for him with my public duties…I think I have now made up my mind to say to him that he should remain a year after the commencement of my term, but that I can promise nothing more…You yourself inform me of the apprehension (unfounded) that I may retain in office those appointed by General Pierce; & that my administration in this respect will be but a continuance of his: & other friends entertain the same apprehensions."

January 9, 1857, as president-elect, regarding his plans to head to Washington, DC: "It is my purpose, God willing, to leave here for Washington on Tuesday the 20th instant & to sleep there on Tuesday Night. For many reasons which I have not time to enumerate, I desire this to be kept strictly confidential. I think I shall reach there without any person being previously apprised of it—certainly no person here, out of my own family shall know any thing about it. I desire this simply to avoid a 'fuss' on the road; & this I can only avoid by 'stealing a march.' I need not say I shall be happy to see you there."

January 25, 1857, as president-elect, on his aforementioned travels: "Although the Rail Road is not yet opened between Columbia & York yet I intend to leave tomorrow & get across in a sleigh. I shall be in Washington, DC volente, some time on Tuesday where I hope to enjoy the pleasure of meeting you."

April 27, 1857, as president, respecting appointments made in his first few weeks in the White House: "I return Genl. Jones letter & am sorry I have not time to answer it at length. The case, however, is in a nutshell & is made out by himself with a singular 'naiveté.' He was a bosom friend & supporter of General Pierce for which he was not to blame, & got all his friends appointed in Iowa, without referring to the app't of General Dodge in Spain. He accordingly informs you that he has recommended the continuance of all those officers except that of March as Commissioner Patents who is one of the leading friends of my own in the State & is with a large majority of the Democrats in favor of changes. In cases of this kind I act with deliberation & caution. I reappointed the P. Master at Gen: Jones place of residence without hesitation…I deeply regret that you should have conversed with Gov. Wright in the manner you have stated. Although I don't think him a great man I believe him to be a good man. I thought our conversation respecting him was in a great degree bagatelle & fun & had not the most remote idea that you would 'tell him in candor that were you in his place you would not accept any tender' from me…I can now understand his changed manner towards me when he came to take leave."

In overall fine condition. Accompanied by a handsome custom-made finely bound full morocco leather case. Remarkable content from the president whose ineffectual leadership would ultimately play a role in the South's secession.