As speaker of the Pennsylvania Assembly, Benjamin Franklin urges the Commissioners for Indian Affairs to convert goods into money 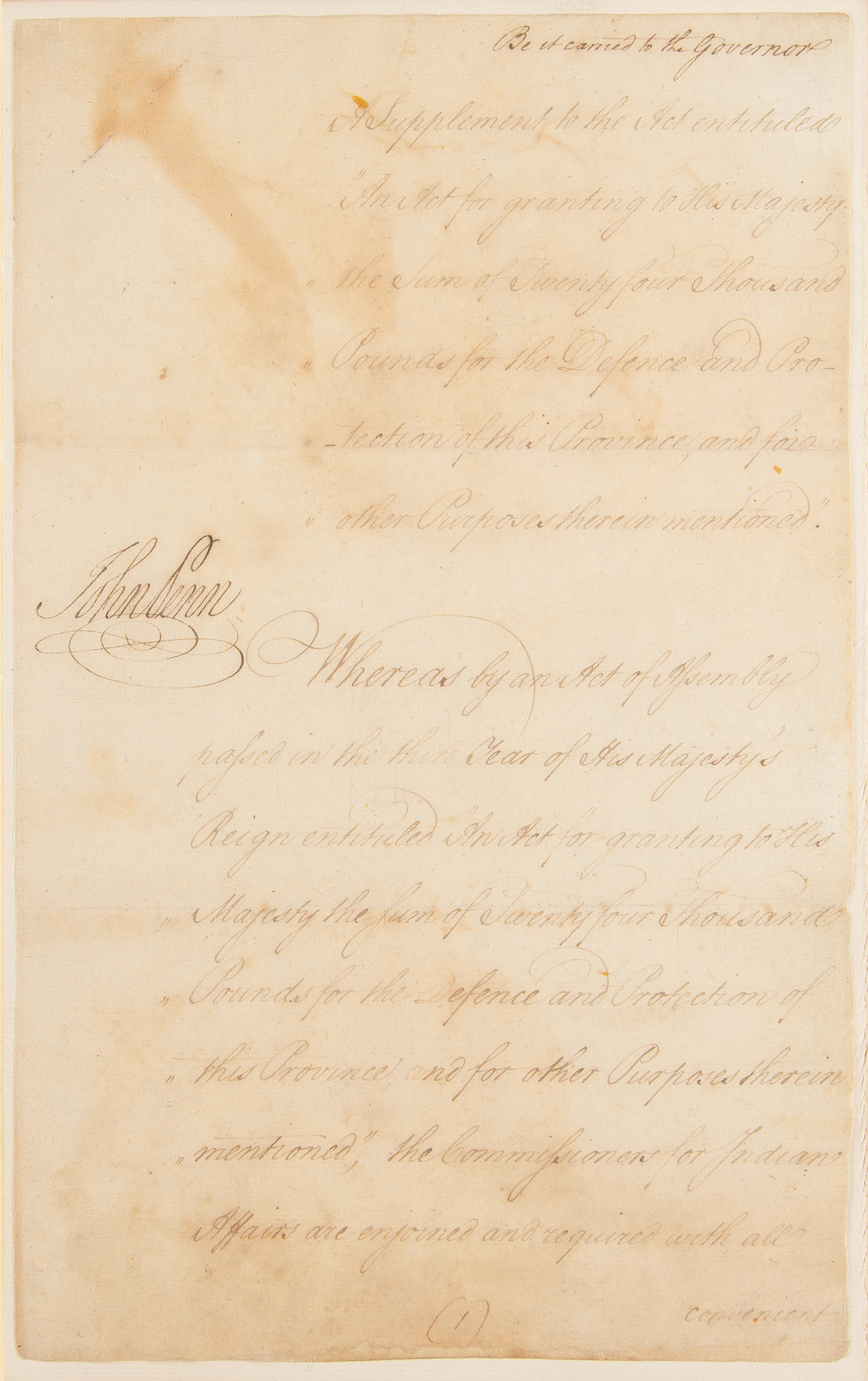 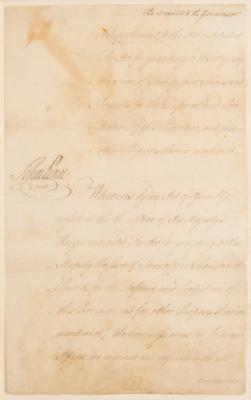 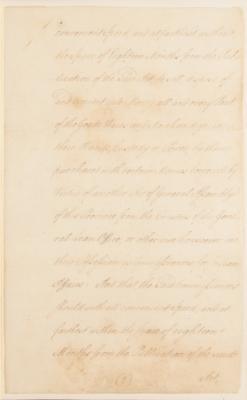 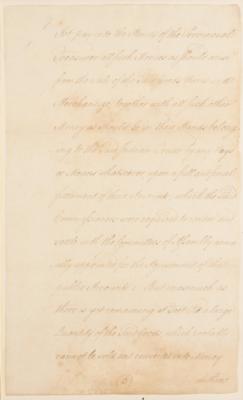 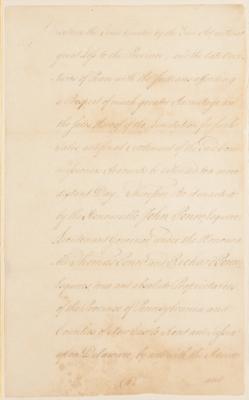 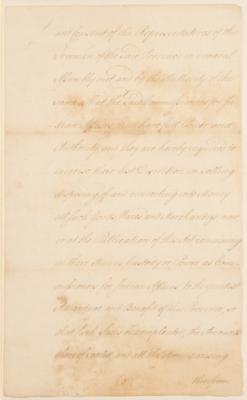 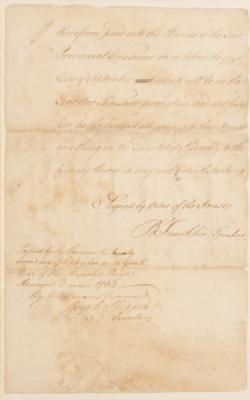 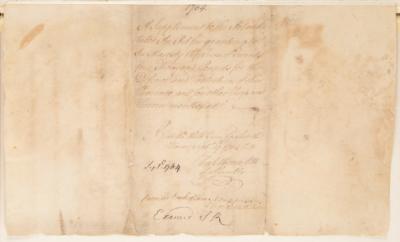 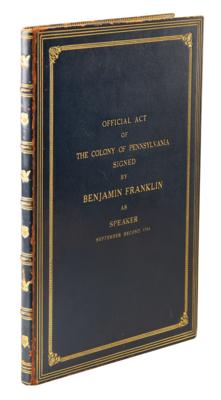 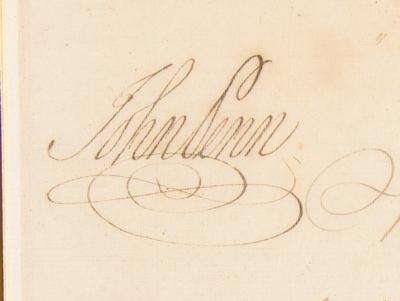 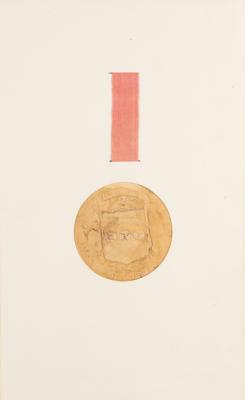 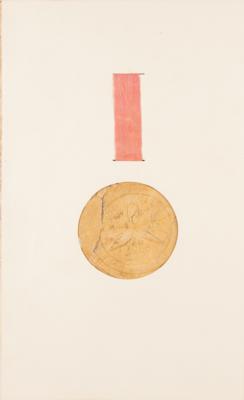 As speaker of the Pennsylvania Assembly, Benjamin Franklin urges the Commissioners for Indian Affairs to convert goods into money

Manuscript DS, signed "Signed by the Order of the House, B. Franklin, Speaker," six pages, 7.5 x 12.5, September 22, 1764. A supplement to the act entitled "An Act for granting to His Majesty the Sum of Twenty Four Thousand pounds for the Defense and Protection of this province and for other purposes herein mentioned," which is signed neatly at the conclusion by Benjamin Franklin as Speaker of the Pennsylvania Assembly, and countersigned on the first page by John Penn as Governor of the Province of Pennsylvania.

The document reads, in part: "Whereas by an Act of Assembly passed in the third year of His Majesty's reign [entitled above]…the Commissioners for Indian Affairs are enjoined and required with all convenient Speed, and at farthest within the Space of Eighteen Months from the Publication of the Said Act, to sell, dispose of, and convert into Money all and every Part of the Goods, Wares and Merchandize in their Hands, Custody or Power, by them purchased with certain Monies borrowed by Virtue of another Act of General Assembly of this Province from the Trustees of the General Loan Office, or otherwise howsoever in their Possession as Commissioners for Indian Affairs: And that the Said Commissioners should with all convenient Speed, and at farthest within the Grace of eighteen Months from the Publication of the said Act, pay into the Hands of the Provincial Treasurer all Such Monies as Should arise from the Sale of the Said Goods, Wares and Merchandize, together with all such other Money as should be in their Hands belonging to the Said Indian Trade by any Ways or Means whatsoever, upon a full and final settlement of their Accounts; which the Said Commissioners were required to render and settle with the Committee of Assembly annually appointed for the Adjustment of the public Accounts: But inasmuch as there is yet remaining at Fort Pitt a large Quantity of the said Goods, which probably cannot be sold and converted into Money within the Time limited by the Said Act without great Loss to the Province; and the late Overtures of Peace with the Indians affording a Prospect of much greater Advantage in the Sales thereof if the Limitation for such Sales, and final Settlement of the said Commissioners Accounts be extended to a more distant Day; Therefore Be it enacted by the Honourable John Penn, Esquire, Lieutenant Governor under the Honourable Thomas Penn and Richard Penn, Esquires, true and absolute Proprietaries of the Province of Pennsylvania and Counties of New Castle, Kent, and Sussex upon Delaware, by and with the Advice and Consent of the Representatives of the Freemen of the Said Province in General Assembly met, and by the Authority of the same That the Said Commissioners for Indian Affairs shall have full Power and Authority, and they are hereby required to exercise their best Discretion in selling, disposing of and converting into Money all Such Goods, Wares and Merchandize, now, or at the Publication of this Act, remaining in their Hands, Custody or Power as Commissioners for Indian Affairs, to the greatest Advantage and Benefit of this Province, so that Such Sales be completed, the Accounts thereof settled, and all the Monies arising therefrom, paid into the Hands of the Said Provincial Treasurer on, or before the first Day of September, which will be in the Year One Thousand Seven Hundred and Sixty five, as the same shall all come into their Hands anything in the Said Act of Assembly to the Contrary thereof in any wise notwithstanding." The document has been professionally affixed inside a custom-made leatherbound presentation folder, which also contains the document's original embossed seal with faded red ribbon. In very good to fine condition, with light staining, professional repairs to small areas of paper loss, and expert silking to reinforce both sides of each page.