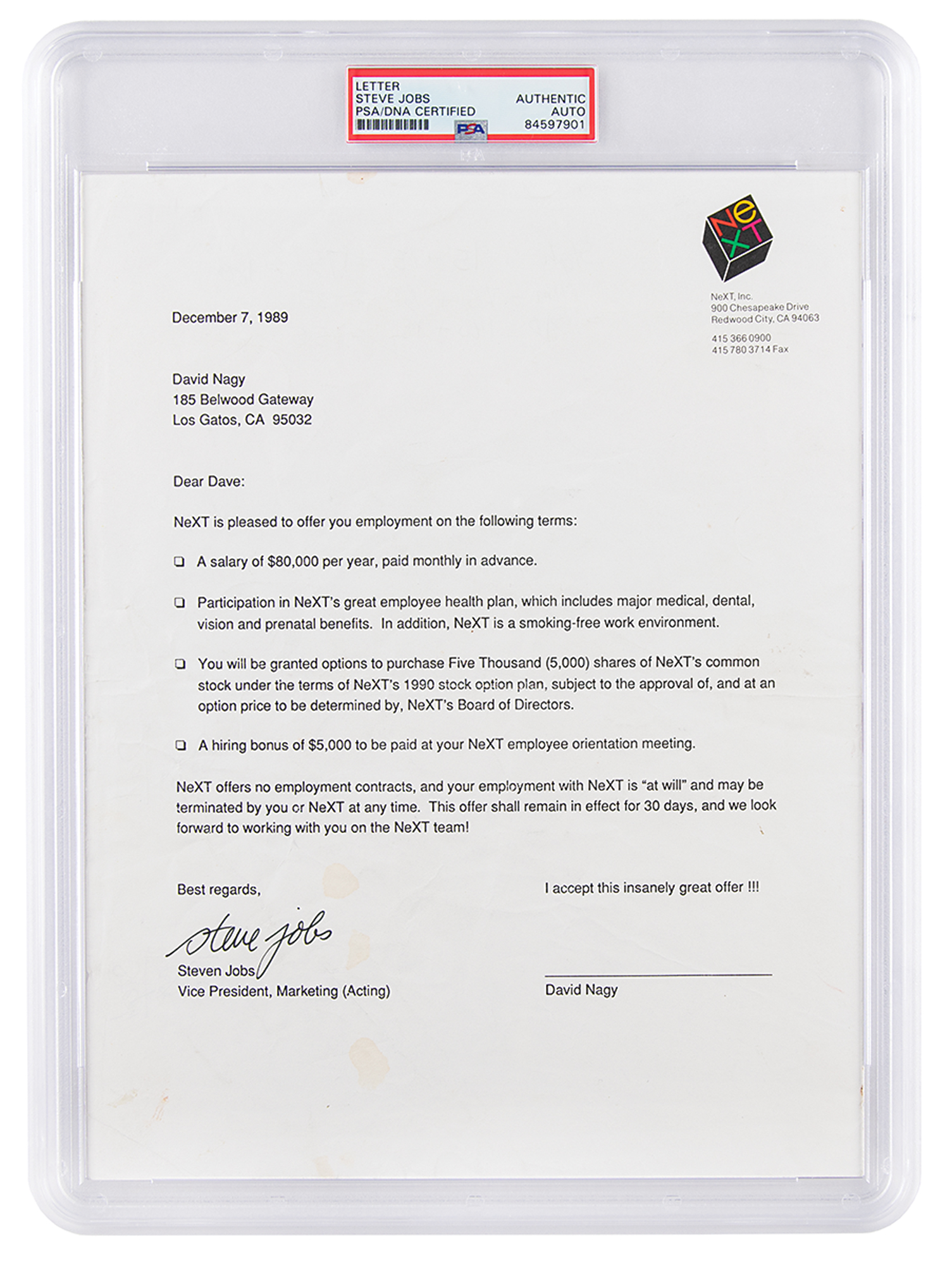 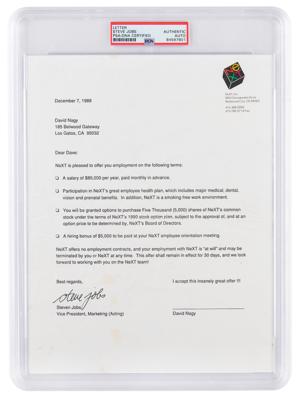 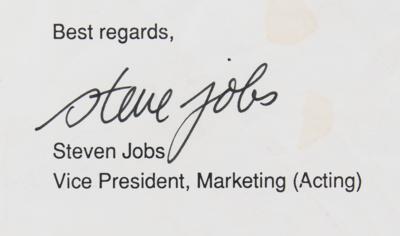 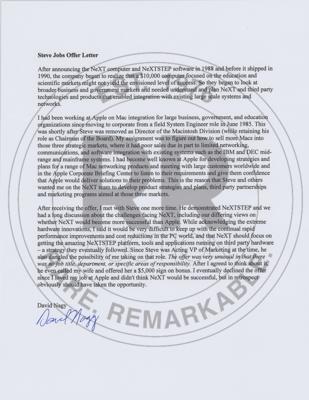 TLS signed "steve jobs," one page, 8.5 x 11, NeXT, Inc. letterhead, December 7, 1989. Letter to David Nagy, who was then working as a product manager at Apple. In part: "NeXT is pleased to offer you employment on the following terms: - A salary of $80,000 per year, paid monthly in advance. - Participation in NeXT's great employee health plan, which includes major medical, dental, vision and prenatal benefits. In addition, NeXT is a smoking-free work environment. - You will be granted options to purchase Five Thousand (5,000) shares of NeXT's common stock under the terms of NeXT's 1990 stock option plan, subject to the approval of, and at an option price to be determined by, NeXT's Board of Directors. - A hiring bonus of $5,000 to be paid at your NeXT employee orientation meeting." Above the line for the recruit's signature (left blank) is typed: "I accept this insanely great offer !!!"—"insanely great" being a famous Jobs-ism used to introduce the Macintosh in 1984. The offer was very unusual in that there was no job title, department, or specific areas of responsibility. In very good condition, with overall creasing and a few light stains. Encapsulated in a PSA/DNA authentication holder.

Accompanied by a letter of provenance from the recipient, in full: "After announcing the NeXT computer and NeXTSTEP software in 1988 and before it shipped in 1990, the company began to realize that a $10,000 computer focused on the education and scientific markets might not yield the envisioned level of success. So they began to look at broader business and government markets and needed understand and plan NeXT and third party technologies and products that enabled integration with existing large scale systems and networks.

I had been working at Apple on Mac integration for large business, government, and education organizations since moving to corporate from a field System Engineer role in June 1985. This was shortly after Steve was removed as Director of the Macintosh Division (while retaining his role as Chairman of the Board). My assignment was to figure out how to sell more Macs into those three strategic markets, where it had poor sales due in part to limited networking, communications, and software integration with existing systems such as the IBM and DEC mid-range and mainframe systems. I had become well known at Apple for developing strategies and plans for a range of Mac networking products and meeting with large customers worldwide and in the Apple Corporate Briefing Center to listen to their requirements and give them confidence that Apple would deliver solutions to their problems. This is the reason that Steve and others wanted me on the NeXT team to develop product strategies and plans, third party partnerships and marketing programs aimed at those three markets.

After receiving the offer, I met with Steve one more time. He demonstrated NeXTSTEP and we had a long discussion about the challenges facing NeXT, including our differing views on whether NeXT would become more successful than Apple. While acknowledging the extreme hardware innovations, I said it would be very difficult to keep up with the continual rapid performance improvements and cost reductions in the PC world, and that NeXT should focus on getting the amazing NeXTSTEP platform, tools and applications running on third party hardware - a strategy they eventually followed. Since Steve was Acting VP of Marketing at the time, he also dangled the possibility of me taking on that role. The offer was very unusual in that there was no job title, department, or specific areas of responsibility. After I agreed to think about it, he even called my wife and offered her a $5,000 sign on bonus. I eventually declined the offer since I loved my job at Apple and didn't think NeXT would be successful, but in retrospect obviously should have taken the opportunity."