Teddy to the editor of the Outlook: "I do not think the President in the middle of a campaign should appear thru any periodical, even his favorite" 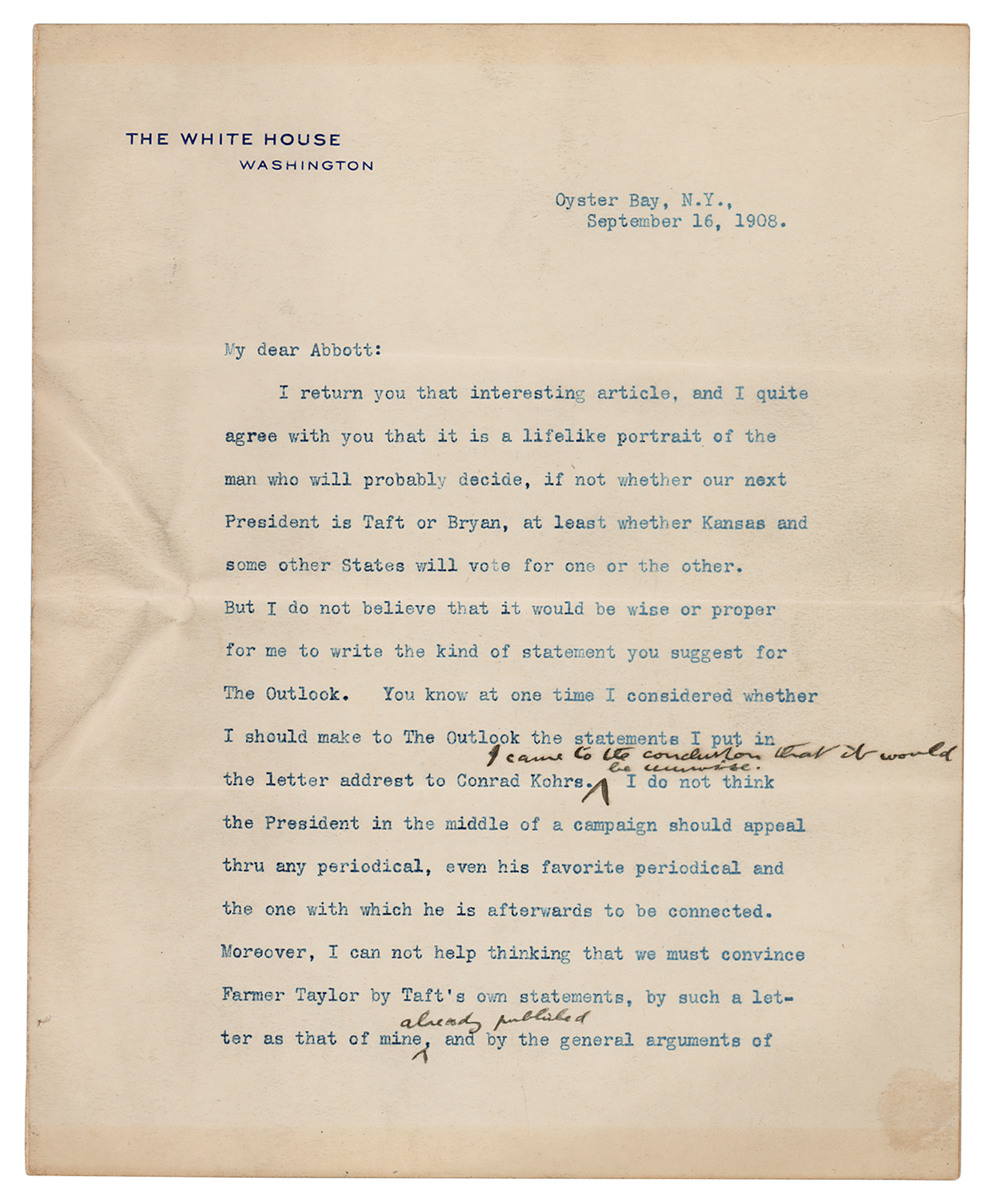 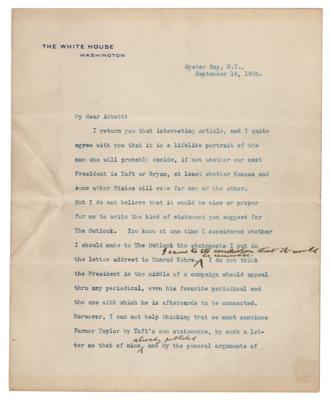 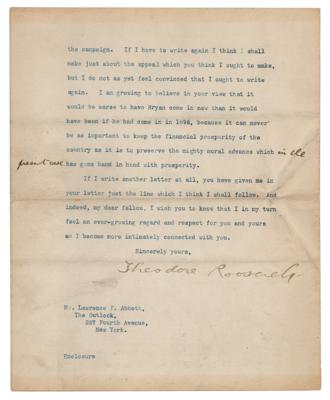 Teddy to the editor of the Outlook: "I do not think the President in the middle of a campaign should appear thru any periodical, even his favorite"

TLS as president, two pages on two adjoining sheets, 7.25 x 8.75, White House letterhead, September 16, 1908. Letter to Lawrence F. Abbott, the editor of the Outlook, in full (bracketed sections are in Roosevelt's own hand): "I return to you that interesting article, and I quite agree with you that it is a lifelike portrait of the man who will probably decide, if not whether our next President is Taft or Bryan, at least whether Kansas and some other States will vote for one one or the other. But I do not believe that it would be wise or proper for me to write the kind of statement you suggest for The Outlook. You know at one time I considered I should make to The Outlook the statements I put in the letter addressed to Conrad Kohrs. [I came to the conclusion that it would be unwise.] I do not think the President in the middle of a campaign should appear thru any periodical, even his favorite periodical and the one with which he is afterwards to be connected. Moreover, I can not help thinking that we must convince Farmer Taylor by Taft's own statements, by such a letter as that of mine [already published], and by the general arguments of the campaign. If I have to write again I think I shall make just about the appeal which you think I ought to write again. I am growing to believe in your view that it would be worse to have Bryan come in now than it would have been if he had come in in 1896, because it can never be as important to keep the financial prosperity of the country as it is to preserve the mighty moral advance which [in the present case] has gone hand in hand with prosperity. If I write another letter at all, you have given me in your letter just the line which I think I shall follow. And indeed, my dear fellow, I wish you to know that I in turn feel an ever-growing regard and respect for you and yours as I become more intimately connected with you." In very good to fine condition, with light soiling, three horizontal folds, and heavy creasing to the left side.

Honoring a promise he had previously made, Roosevelt did not run for a third term in the election of 1908. He did, however, play a role in the selection of the Republican nominee, former Circuit Court Judge and Secretary of War William Howard Taft. This championing of Taft is best exhibited in a letter from September 9, 1908, to his friend and politically influential Montana cattle rancher Conrad Kohrs. In this letter, Roosevelt summed up his Square Deal philosophy, writing: 'As a people we are justly proud of our business industry, of our energy and intelligence in our work; and it is entirely right that we should ask ourselves as to any given course of conduct, 'Will it be profitable?' But it is also no less emphatically true that the bulk of our people, the plain people who found in Abraham Lincoln their especial champion and spokesman, regard the question, 'Is this morally right?' as even more important than the question, 'Is this profitable?' when applied to any given course of conduct. Indeed, in the long run our people are sure to find that in all dealings, alike in the business and the political world, what is really profitable is that which is morally right.' In this election, Taft was running against William Jennings Bryan, a 2-time Democratic Presidential nominee who championed a populist message of trust-busting, anti-profiteering, and income and inheritance taxes.

In its October 3, 1908 edition, The Outlook, for which Theodore Roosevelt would later write, published an article on the 'New Western Farmer,' which profiled a Midwestern farmer named Franklin Taylor, and his inclinations during the presidential election. The article painted a picture of a disconnect between the moneyed Eastern interests and the more morally conscious Midwesterner, who saw a danger in the corruption of banks and railroads. The editor of the magazine was Lawrence Abbott, who wrote Roosevelt asking for his reaction for publication. Roosevelt responded with this fascinating letter, spelling out not only a policy whereby he would not seek to publicly comment during an election but also what the future direction of the country ought to be, spelling out in the most succinct and powerful language his Square Deal philosophy.

Taft went on to easily win the election. Interestingly, during Taft's presidency, a rift developed between the two, with Roosevelt championing the progressive and Taft the conservative wings of the Republican party. This ended with Roosevelt forming the 'Bull moose' and both men losing to Woodrow Wilson the election of 1912.