Tesla evaluates his place amidst Edison and Bell: "The telephone means convenience, the incandescent lamp comfort but power means bread and butter" 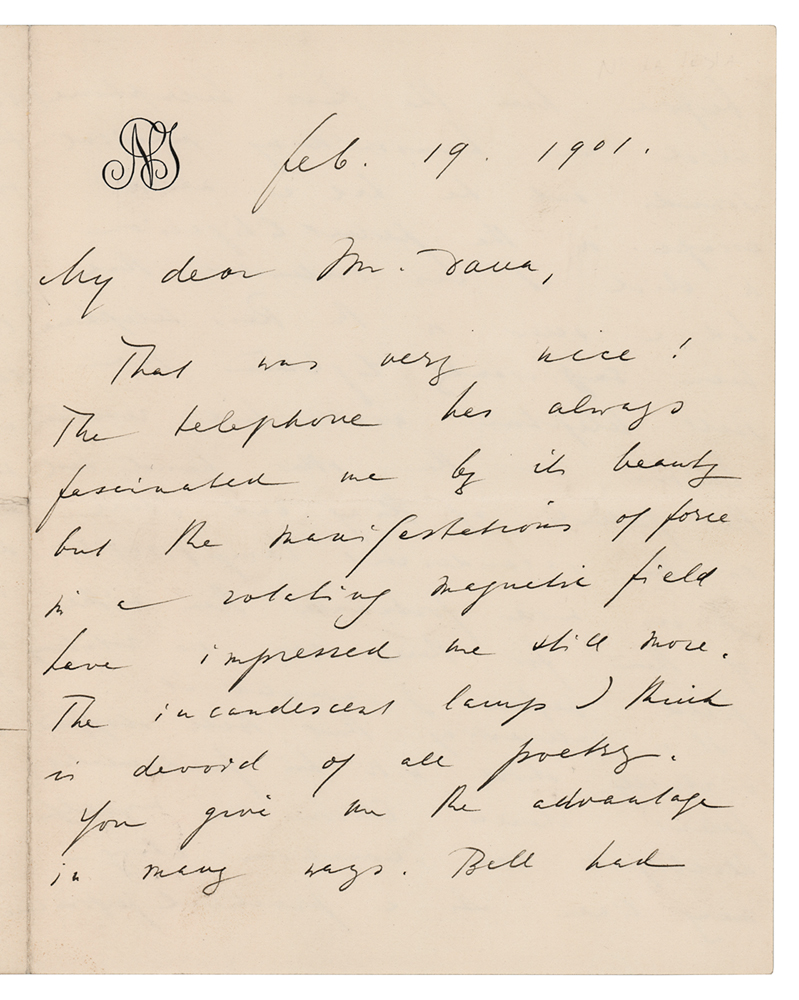 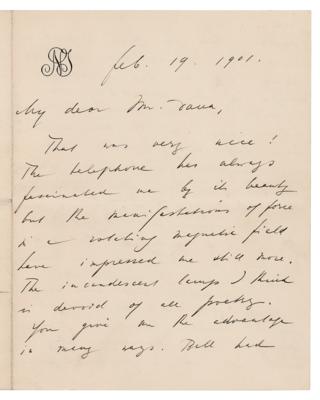 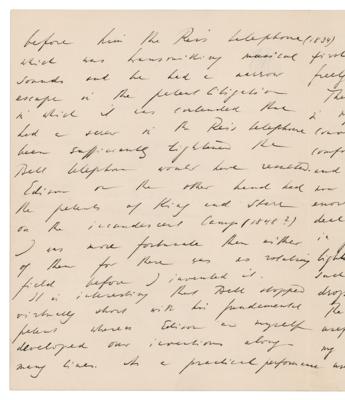 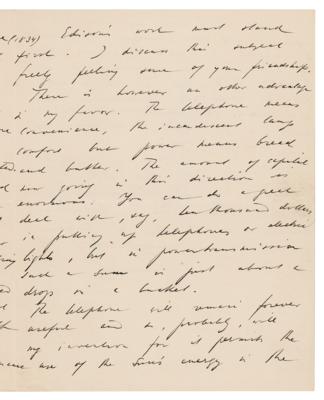 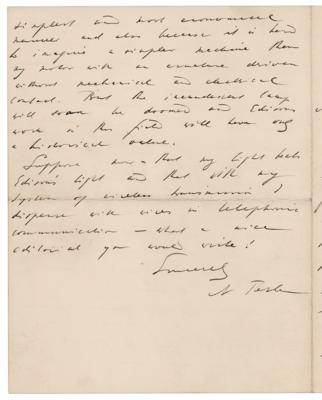 Tesla evaluates his place amidst Edison and Bell: "The telephone means convenience, the incandescent lamp comfort but power means bread and butter"

Important and extraordinary ALS signed “N. Tesla,” four pages on two adjoining sheets, 5.25 x 6.75, personal monogram letterhead, February 19, 1901. Fantastic handwritten letter to "Mr. Dana," evidently New York Sun editor Paul Dana. In full: "That was very nice! The telephone has always fascinated me by its beauty but the manifestations of force in a rotating magnetic field have impressed me still more. The incandescent lamp I think is devoid of all poetry. You give me the advantage in many ways. Bell had before him the Reis telephone (1834) which was transmitting musical sounds and he had a narrow escape in the patent litigation in which it was contended that had a screw in the Reis telephone been sufficiently tightened the Bell telephone would have resulted. Edison on the other hand had the patents of King and Starr on the incandescent lamp (1848?). I was more fortunate than either of them for there was no rotating field before I invented it.

It is interesting that Bell stopped virtually short with his fundamental patent whereas Edison and myself developed our inventions along many lines. In a practical performance Edison's work must stand first. I discuss this subject freely feeling sure of your friendship. There is however another advantage in my favor. The telephone means convenience, the incandescent lamp comfort but power means bread and butter. The amount of capital now going in this direction is enormous. You can do a great deal with, say, ten thousand dollars in putting up telephones or electric lights, but in power transmission such a sum is just about a drop in a bucket.

The telephone will remain forever useful and so, probably, will my invention for it permits the use of the sun's energy in the simplest and most economical manner and also because it is hard to imagine a simpler machine than my motor with an armature driven without mechanical and electrical contact. But the incandescent lamp will soon be doomed and Edison's work in the field will have only a historical value.

Suppose now that my light beats Edison's light and that with my system of wireless transmission I dispense with wires in telephonic communication—what a nice editorial you would write!" In very fine condition.

In this fascinating letter, Tesla observes his place within the hierarchy of America's great inventors of the era: while Bell and Edison stood on the shoulders of inventors who came before, he insists that he stands alone. He refers to Johann Philipp Reis, the inventor of the 'make and break' telephone; and Edward Augustin King and John Wellington Starr, business associates and early pioneers of the incandescent lamp. Unlike Bell and Edison, Tesla claims to have no forerunner in his practical development of a rotating magnetic field in an AC motor (which has also been attributed to Galileo Ferraris, although he never patented his work). Tesla famously demonstrated the concept with his 'Egg of Columbus' device at the 1893 Chicago World's Fair, which used a magnetic field to spin a copper egg on end.

Tesla also developed the first practical phosphorescent lamp, and was attempting to harness solar power to be wirelessly transmitted. Later in 1901, he received six different patents in the United States, most relating to wireless transmission and the utilization of radiant energy—methods that he thought could revolutionize the world, but remain underdeveloped to this day. Nevertheless, this incredible handwritten letter reveals Tesla's broad knowledge of scientific history in addition to his frank thoughts on contemporary inventors and their inventions.