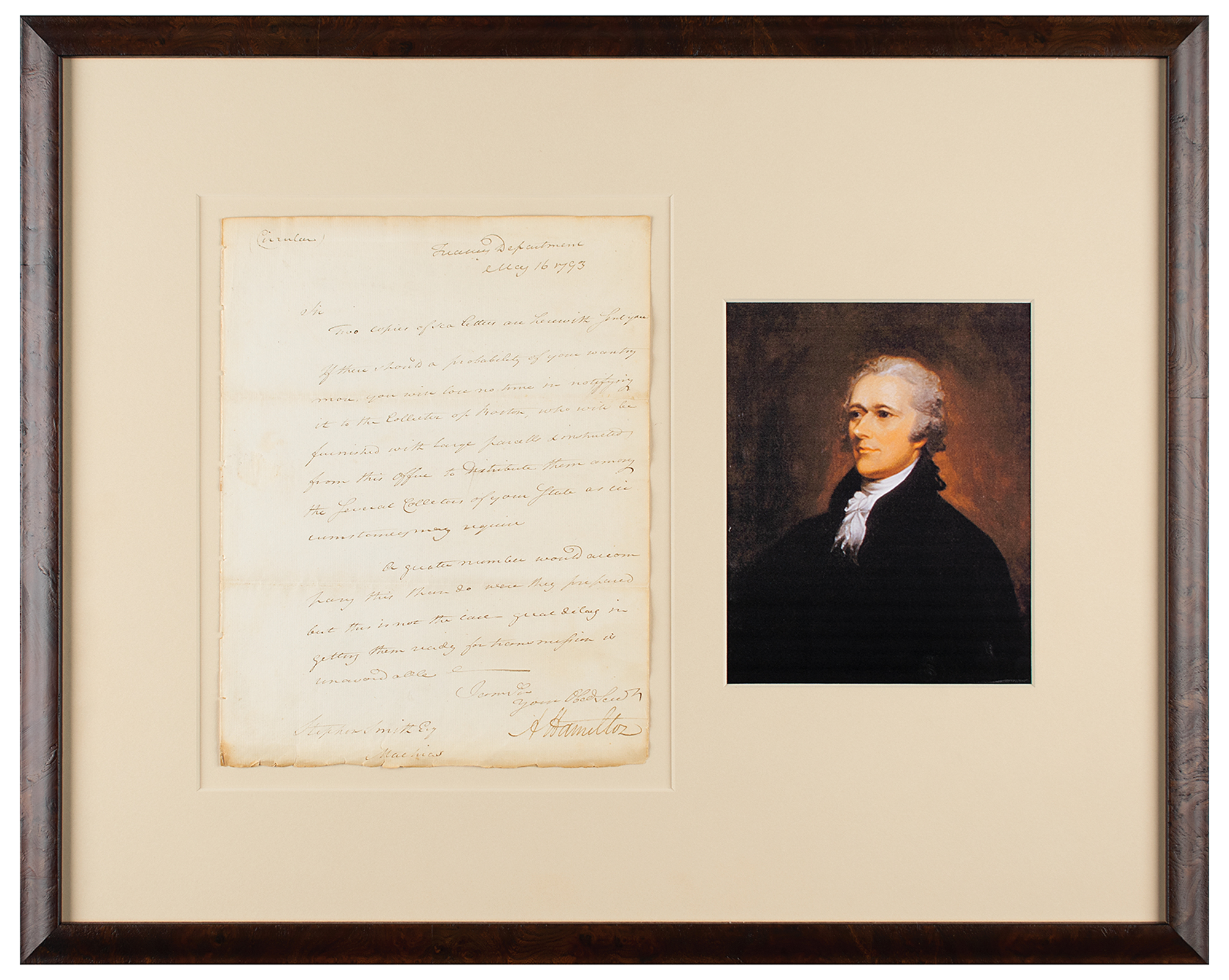 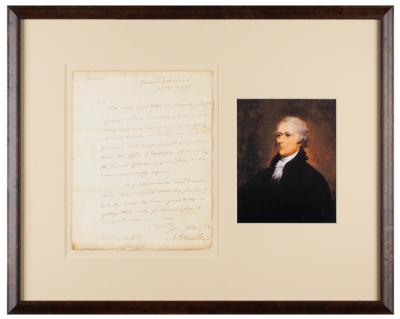 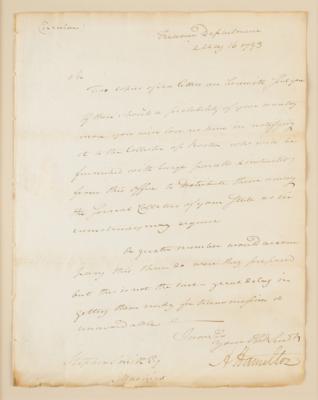 LS as Secretary of the Treasury, signed “A. Hamilton,” one page, 7.75 x 10, May 16, 1793. Treasury Department circular letter to Stephen Smith, collector at Machias, Maine. In full: "Two copies of sea letters are herewith sent you. If there should be a probability of your wanting more, you will lose no time in notifying it to the Collector of Boston, who will be furnished with large parcels and instructed from this office to distribute them among the several collectors of your state as circumstances may require. A greater number would accompany this than do were they prepared, but this is not the case—great delay in getting them ready for transmission is unavoidable." Expertly archivally mounted, matted, and framed under Tru-Vue Optium UV Acrylic with a color portrait to an overall size of 21.5 x 17. In fine condition, with light toning and some light edge wear.

After the overthrow of King Louis XIV and Marie Antoinette in January 1793, the French revolutionary government found itself at war with much of Europe. Edmond-Charles Genêt, the Girondin minister to the United States, arrived in April and began issuing privateering commissions, authorizing the bearers to seize British merchant ships and their cargo for personal profit under the protection of the French government. This not only put all American ships at risk, but President George Washington feared it could draw the United States into an unwanted European war. He issued a neutrality proclamation on April 22, 1793, and sought to further ensure the safety of American citizens and cargoes at sea.

The prior Franco-American Treaty of Amity and Commerce of 1778 provided for the issuance of sea letters should either of the signatories become engaged in war. Under this provision, in the week prior to this letter, the Treasury Department issued a notice on the subject, declaring: 'It being necessary in the present state of War among the principal European powers, that all ships and vessels belonging to the citizens of the United States, should be furnished as soon as possible with sea letters, for their more perfect identification and security.' Printed in three languages—English, French, and Dutch—the sea letters were signed by President George Washington and Secretary of State Thomas Jefferson, then sent to the collectors of the ports for distribution. There, each letter would be filled out with the name of the vessel and its commander, the nature of its cargo, and the bulk of the ship.

When announcing the issuance of the sea letters, Hamilton emphasized their significance to the commerce of the United States: 'These documents being of great importance to the United States, not only as they regard the benefits to be derived from a state of peace by the owners, navigators and builders of ships, but also as they affect the importation of our supplies, and the exportation of our produce at peace charges.' The urgency of the present letter—sending two copies of the prepared sea letters, with instructions for obtaining more—demonstrates the importance that Hamilton placed upon the matter.

Also of note is the recipient of this letter, Stephen Smith, whose American lineage dated back to the Mayflower. He had ably served in diverse roles during the fight for independence: appointed truckmaster to the Native American Indians by the Provincial Congress in 1776, he was tasked with supplying them with provisions in an effort to dissuade them from joining the British in suppressing the rebellion. Later made captain of the militia, he participated in the defense of settlements in eastern Maine. At the beginning of George Washington's presidency, he rewarded Smith for his loyal and distinguished service by commissioning him as part of the first group of officers of the United States Customs Service.