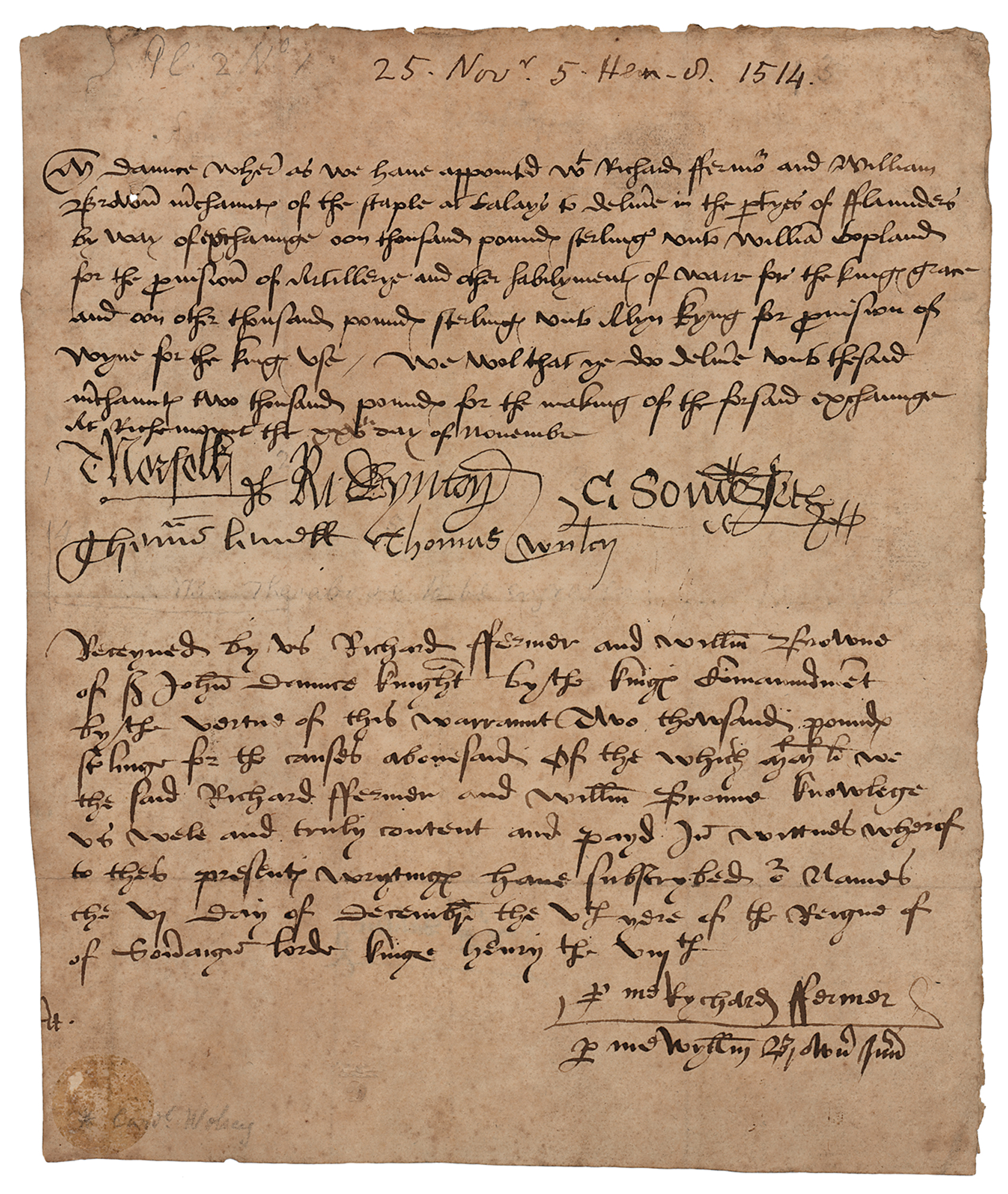 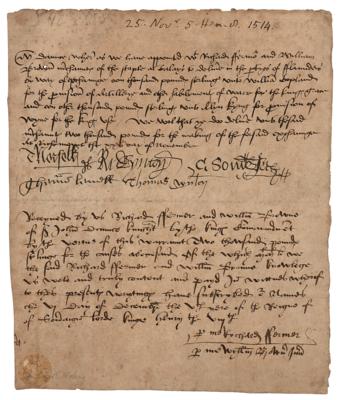 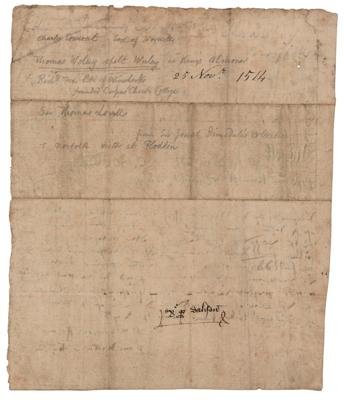 English statesman and Catholic bishop (1473-1530) who served as almoner to King Henry VIII and was made Lord Chancellor, the king's chief adviser, in 1515. In that role, he was the controlling figure in virtually all matters of state, and was often depicted as an alter rex ('other king'). After failing to negotiate an annulment of Henry's marriage to Catherine of Aragon, Wolsey fell out of favor, was stripped of his government titles, and brought up on charges of treason. Exceedingly rare manuscript DS, signed “Thomas Wulcy,” one page, 7 x 8.5, November 25, 1513. Privy Council warrant ordering "Daunce," John Dauntesey, to make payments in Flanders to Richard Fermour and William Brown, Merchants of the Staple at Calais, of £1000 to be paid to William Copland for the purchase of "artillerye and other habilymentes of Warre" and a further £1000 to be paid to Alan Kyng "for provision of Wyne for the kynges use." Signed below in ink by five members of the Privy Council: Thomas Wolsey as Cardinal and Archbishop of York; Thomas Howard, 2nd Duke of Norfolk; Charles Somerset, 1st Earl of Worcester; Richard Foxe, Bishop of Winchester; and and Sir Thomas Lovell. A receipt by Fermour and Brown, dated December 6, 1513, is penned on the lower half of the document. Endorsed on the reverse, "ex[aminat]ur p[er] Dalison" [examined by George Dalison, Auditor of the Exchequer]. In very good to fine condition, with an incorrect date notation at the head, two trimmed edges, a few minor pencil notations, and circular adhesive remnants from a removed Ray Rawlins Collection label to the lower left corner.

Provenance: illustrated in full in The Guinness Book of World Autographs by Rawlins (1977, p. 241), and included in the auction of the Rawlins Collection by Sotheby’s in June 1980.

Penned in the time of the Anglo-French War (1512-1514), this document is an example of Wolsey's wide-ranging influence and his abilities to keep English troops supplied and well-equipped. One of the recipients, Richard Fermor, was given a share in the contract for victualing the royal army during the Tournai Campaign of 1513, and he exported large quantities of wheat, flour, beer barrels, cannonballs, harness, and saltpetre. Wolsey would have a key role in negotiating the Anglo-French Treaty of 1514, which secured a temporary peace between the two nations.

The signature of Thomas Howard, 2nd Duke of Norfolk, also holds great significance, as he had recently led the English to victory over the Scots at the decisive Battle of Flodden, for which he was richly rewarded by King Henry VIII. Howard was also the grandfather of two of Henry VIII's wives—Anne Boleyn and Catherine Howard—and the great-grandfather of Queen Elizabeth I.