"The time has come"—historic handwritten letter from President Lincoln urging the resignation of Postmaster General Montgomery Blair prior to the 1864 election, later famously published in 2005's Team of Rivals 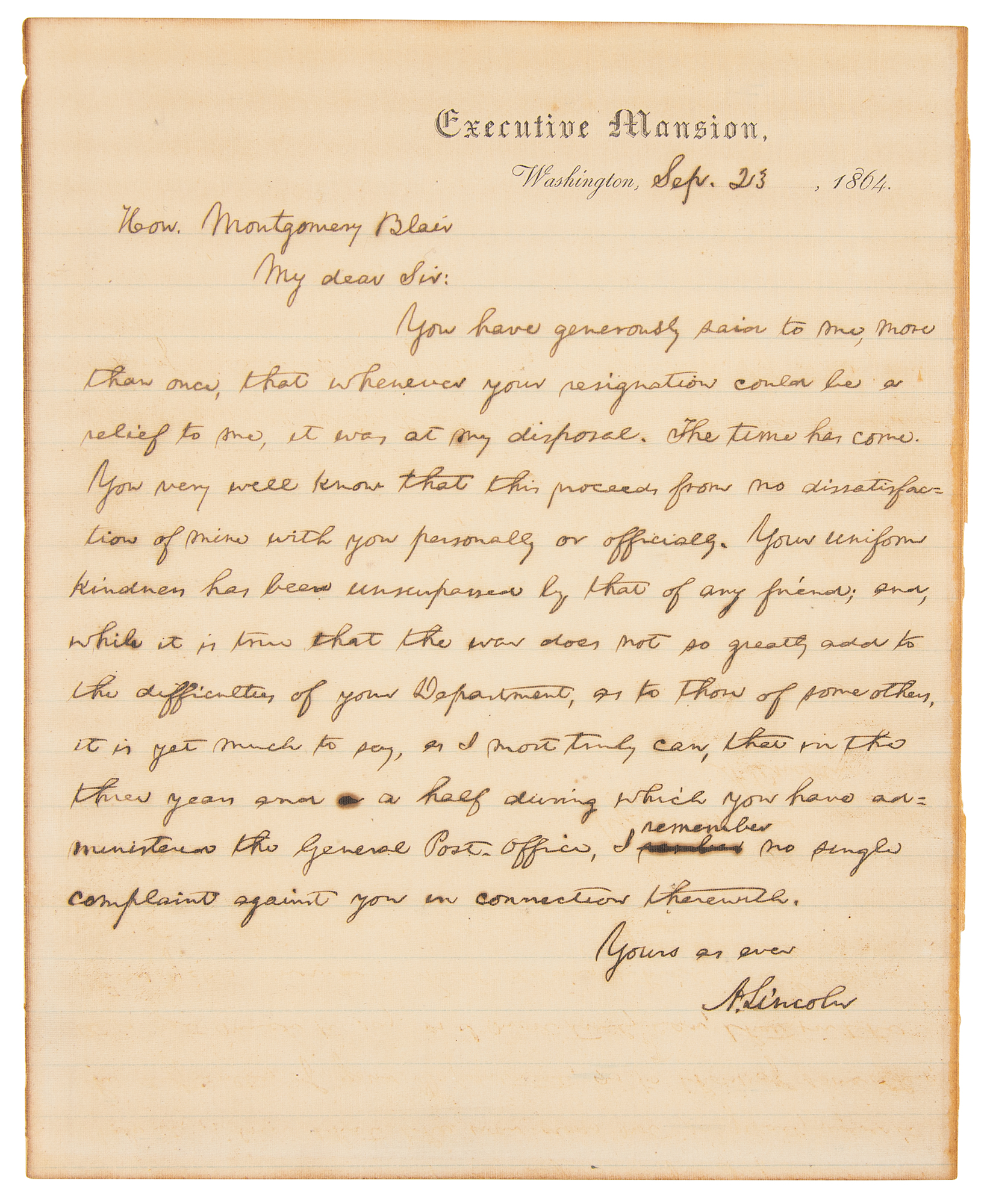 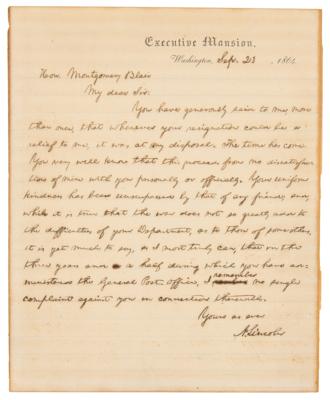 "The time has come"—historic handwritten letter from President Lincoln urging the resignation of Postmaster General Montgomery Blair prior to the 1864 election, later famously published in 2005's Team of Rivals

Significant Civil War-dated ALS as president signed "A. Lincoln," one page, 8 x 10, Executive Mansion letterhead, September 23, 1864. Handwritten letter to Postmaster General Montgomery Blair, requesting his resignation. In full: "You have generously said to me more than once, that whenever your resignation could be a relief to me, it was at my disposal. The time has come. You very well know that this proceeds from no dissatisfaction of mine with you personally or officially. Your uniform kindness has been unsurpassed by that of any friend; and, while it is true that the war does not so greatly add to the difficulties of your Department, as to those of some others, it is yet much to say, as I most truly can, that in the three years and a half during which you have administered the General Post-Office, I remember no single complaint against you in connection therewith." Professionally and fully silked on both sides and in fine condition.

The offered letter is published on page 659 in Doris Kearns Goodwin’s best-selling 2005 book Team of Rivals: The Political Genius of Abraham Lincoln, which also lends insight into Blair’s reaction to the request: ‘Despite his offer to resign, Blair was surprised to find the dismissal letter on his desk. Later that morning, he encountered Welles and Bates coming out of the White House.’ He stopped the men and exclaimed: ‘I suppose you are both aware that my head is decapitated. I am no longer a member of the Cabinet.’ A copy of Team of Rivals is included with the lot.

Although Lincoln offers no specific reason for requesting Blair's resignation other than stating that, "The time has come," the latter speculated in a letter to his wife, 'I suppose, however, that he thinks it will help to appease the Fremonters' and Radicals, if I am dropped.' Blair was correct in his theory. The radical Republicans had given President Lincoln an ultimatum—they would not support him in his bid for reelection unless he removed the Southern-born Blair from his cabinet; otherwise, they would vote for their third-party radical Republican nominee, John Fremont.

Blair, aware of the radical faction's disdain for him, had twice tried to resign in 1864, with Lincoln refusing him both times. In early September 1864, the president was warned by Senator Henry Wilson of Massachusetts that 'Tens of thousands of men will be lost to you or will give a reluctant vote on account of the Blairs.' It was only after Lincoln discovered that Fremont would withdraw from the presidential race if Blair was taken out of office that the President acted. Fremont withdrew on September 22, and Lincoln, the following day, sent this letter to Blair, who immediately resigned. William Dennison, the former governor of Ohio, assumed Blair's role as Postmaster General.

While radical Republicans were appeased with Blair's resignation, others were upset to hear the news. Gideon Welles was extremely disappointed by Blair's removal. The Navy Secretary called Blair's resignation '…the greatest misfortune that had befallen the Cabinet.' To many people, it seemed that Lincoln's actions were unnecessary—losing Blair was a large price to pay in return for radical Republican support in an election that many believed Lincoln would have won without the radical vote.