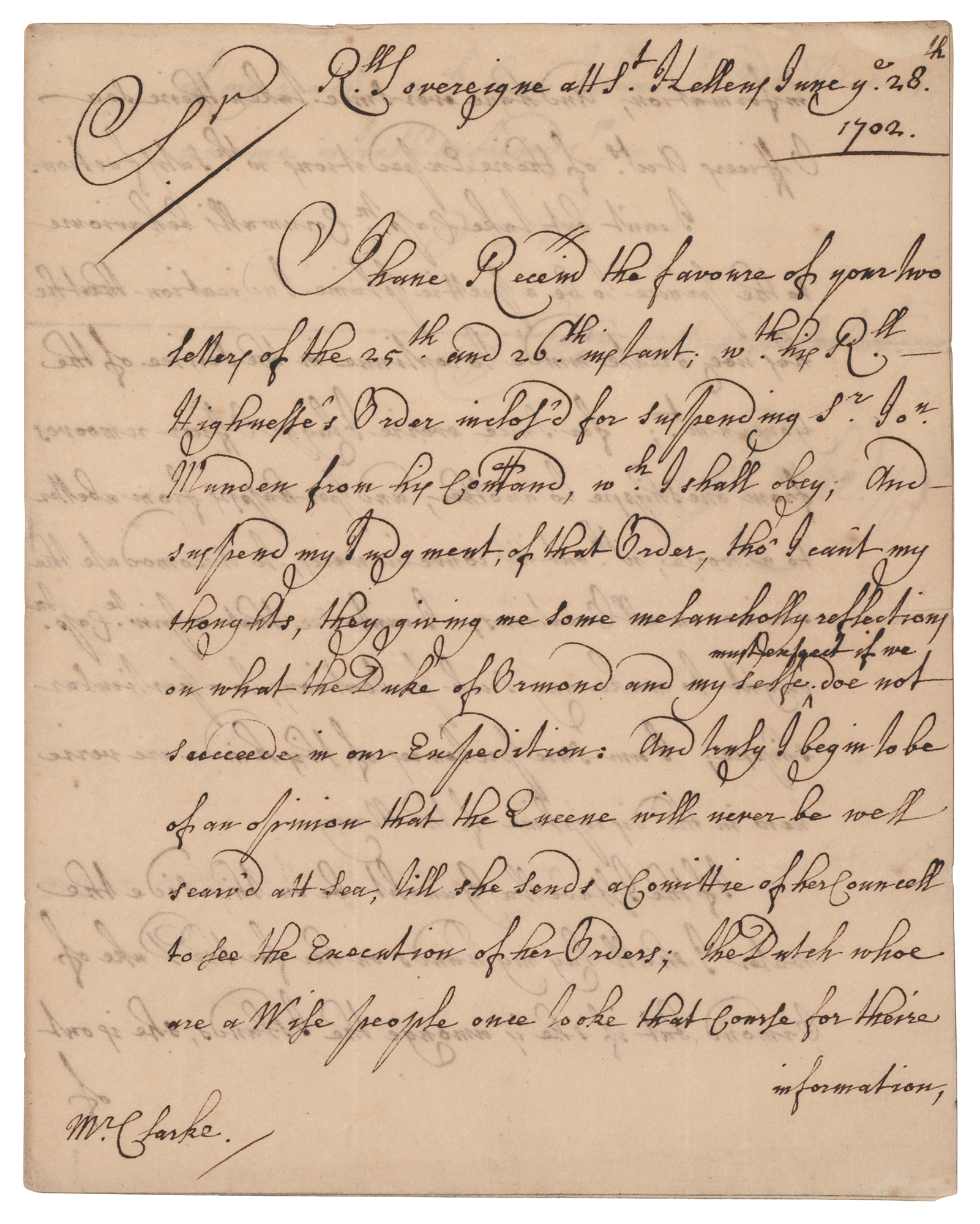 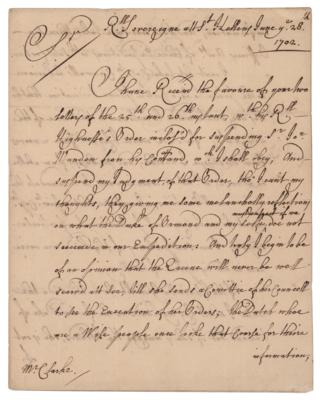 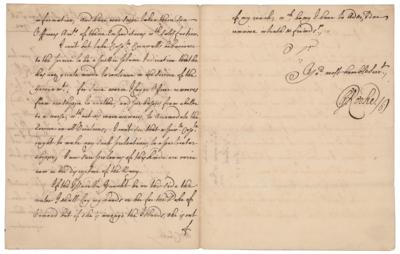 English naval officer (1650-1709) who served in the Third Anglo-Dutch War, Nine Years' War, the Great Northern War, and the War of the Spanish Succession, who distinguished himself at the Battle of La Hogue and captured Gibraltar. ALS signed “G: Rooke,” three pages on two adjoining sheets, 7 x 8.75, June 28, 1702. Handwritten letter to "Mr. Clarke," saying that he will carry out the Prince's orders to suspend Sir John Munden, though he disagrees with the decision; makes a suggestion for the Queen's oversight of her fleet; and complains about a junior officer's request for assignment on a certain ship. In part: "I have Received the favoure…wth his R'll Highnesse's Order inclos'd for suspending Sr. Jon. Munden from his command, wch. I shall obey; and suspend my Judgment, of that Order, tho' I can't my thoughts, they giving me some melancholly reflecting on what the Duke of Ormond and my selfe if we doe not succeede in our Expedition: and truly I begin to be of an opinion that the Queene will never be well searv'd att sea till she sends a Committee of her councell to see the execution of her orders; the Dutch whoe are a wise people once tooke that course for theire information, and have ever since taken their sea Officers Acc'ts of theire Expeditions wth. satisfaction. I can't but take Cap'tn Cornwall's behavioure to the prince to be a prettie plaine indication that he has noe greate mind to continue in the service of the Governm't; for since everie Flagge Officer remooves from one shippe to another, and perhapps from a better to a worse, w'thout his conveniencies, to accomodate the service on all Occations; I can't see that a priv'te Cap'tn ought to make any such pretentions, to a particular shippe; I am sure pretences of this kinde are verie new in the discipline of the Navy." In fine condition.

Sir John Munden was a rear-admiral in the Royal Navy who was dismissed from the service for having failed to engage a French fleet, despite having been acquitted by a court-martial of any misconduct in the matter. In spite of Rooke's comments in this letter, Munden was was ultimately discharged on August 10, 1702, never to hoist his flag again. The other item in question, Captain Charles Cornewall's rejection of his assignment to the HMS Exeter, went in Rooke's favor—it would not be until 1705 that Cornewall was appointed to another command.