The West Coast rapper writes from prison—"They tried 2 kill me but u know I’m hard 2 kill so I’m still here, as a matter of fact I’m better than ever no scars, no damage" 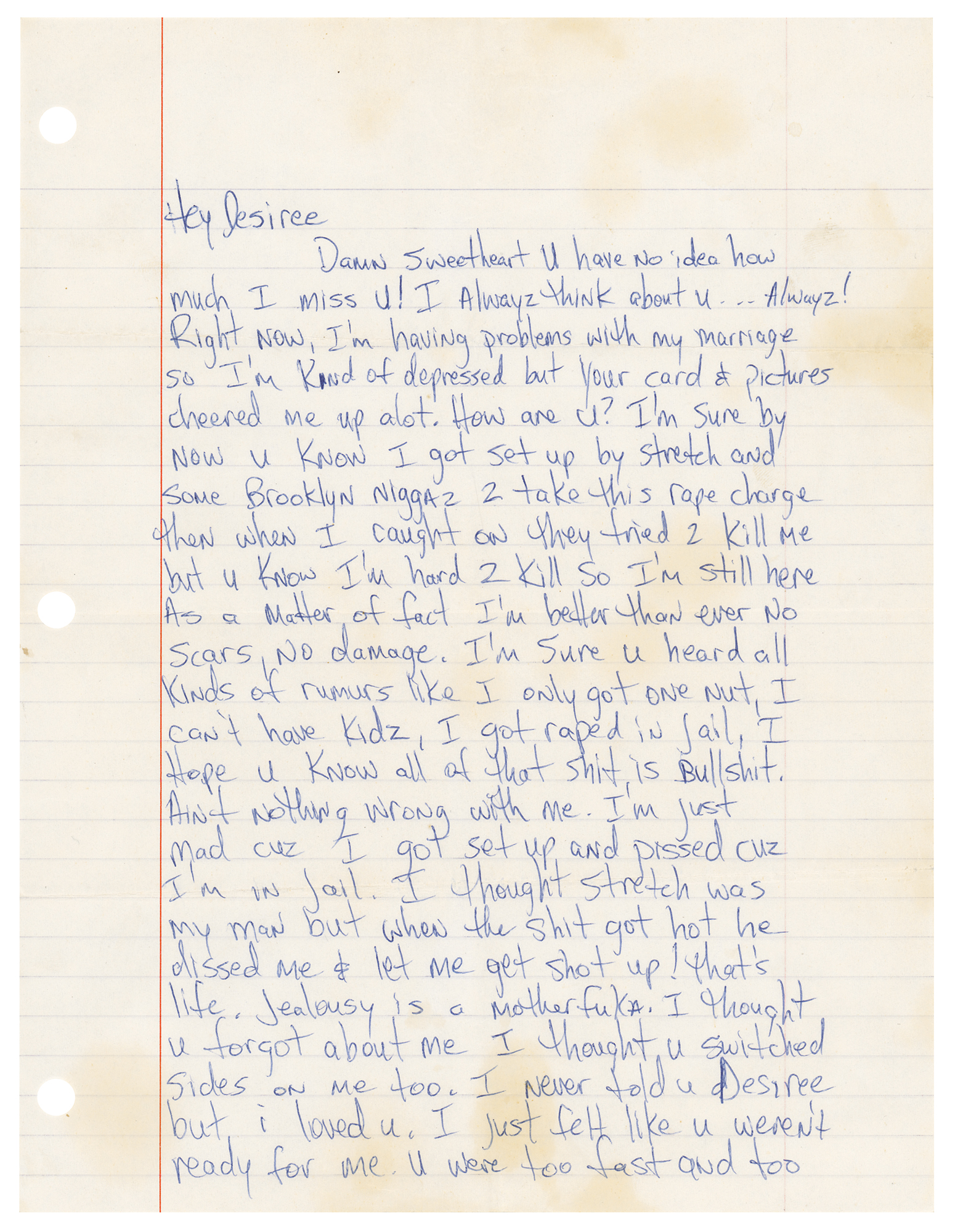 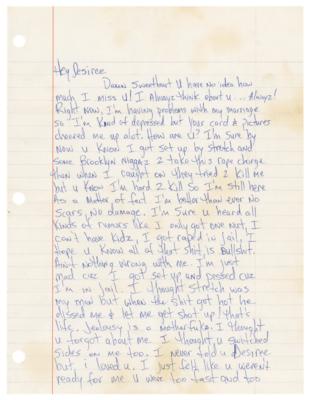 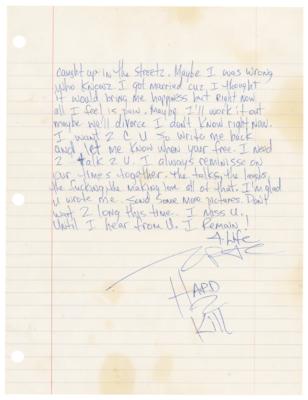 The West Coast rapper writes from prison—"They tried 2 kill me but u know I’m hard 2 kill so I’m still here, as a matter of fact I’m better than ever no scars, no damage"

Rare ALS signed “2Pac, Hard 2 Kill,” two pages, 8 x 10.5, postmarked July 5, 1995, addressed to his friend “Ms. Desiree Smith,” written while incarcerated in the Clinton Correctional Facility in New York. The handwritten letter, in full: “Damn sweetheart u have no idea how much I miss u! I alwayz think about u…Alwayz! Right now, I’m having problems with my marriage so I’m kind of depressed but your card & pictures cheered me up a lot. How are u? I’m sure by now u know I got set up by Stretch and some Brooklyn niggaz 2 take this rape charge then when I caught on they tried 2 kill me but u know I’m hard 2 kill so I’m still here, as a matter of fact I’m better than ever no scars, no damage. I’m sure u heard all kinds of rumurs like I only got one nut, I can’t have kidz, I got raped in jail, I hope u know all of that shit is bullshit. Ain’t nothing wrong with me. I’m just mad cuz I got set up and pissed cuz I’m in jail. I thought Stretch was my man but when the shit got hot he dissed me & let me get shot up! That’s life. Jealousy is a motherfuka. I thought u forgot about me I thought u switched sides on me too. I never told u Desiree but I loved u. I just felt like u weren’t ready for me. U were too fast and too caught up in the streetz. Maybe I was wrong who knowz. I got married cuz I thought it would bring me happiness but right now all I feel is pain. Maybe I’ll work it out maybe we’ll divorce I don’t know right now. I want 2 c u so write me back and let me know when your free. I need 2 talk 2 u. I always reminisse on our times together, the talks, the laughs, the fucking, the making love all of that. I’m glad u wrote me. Send some more pictures. Don’t wait 2 long this time. I miss u. Until I hear from u. I remain! 4 life. 2Pac. Hard 2 kill.” In very good to fine condition, with creasing and light staining. Accompanied by the original mailing envelope addressed in Shakur's hand, incorporating his full name, "Tupac Shakur," in the return address area.

Shakur had begun serving a sentence at the Clinton Correctional Facility in February 1995 after being convicted in a sexual assault case. His album Me Against the World was released a month into his sentence and made an immediate impact on the charts, debuting at number one on the Billboard 200. Tupac's confinement proved an important period in his artistic development as he took the time to read philosophical works including many by Niccolo Machiavelli, which inspired his pseudonym 'Makaveli.' Handwritten material from Tupac is very scarce and highly sought after.