Rare handwritten letter in which Hume comments on Parliamentary elections, the siege in Holland, and his idea "of printing the Philosophical Essays" 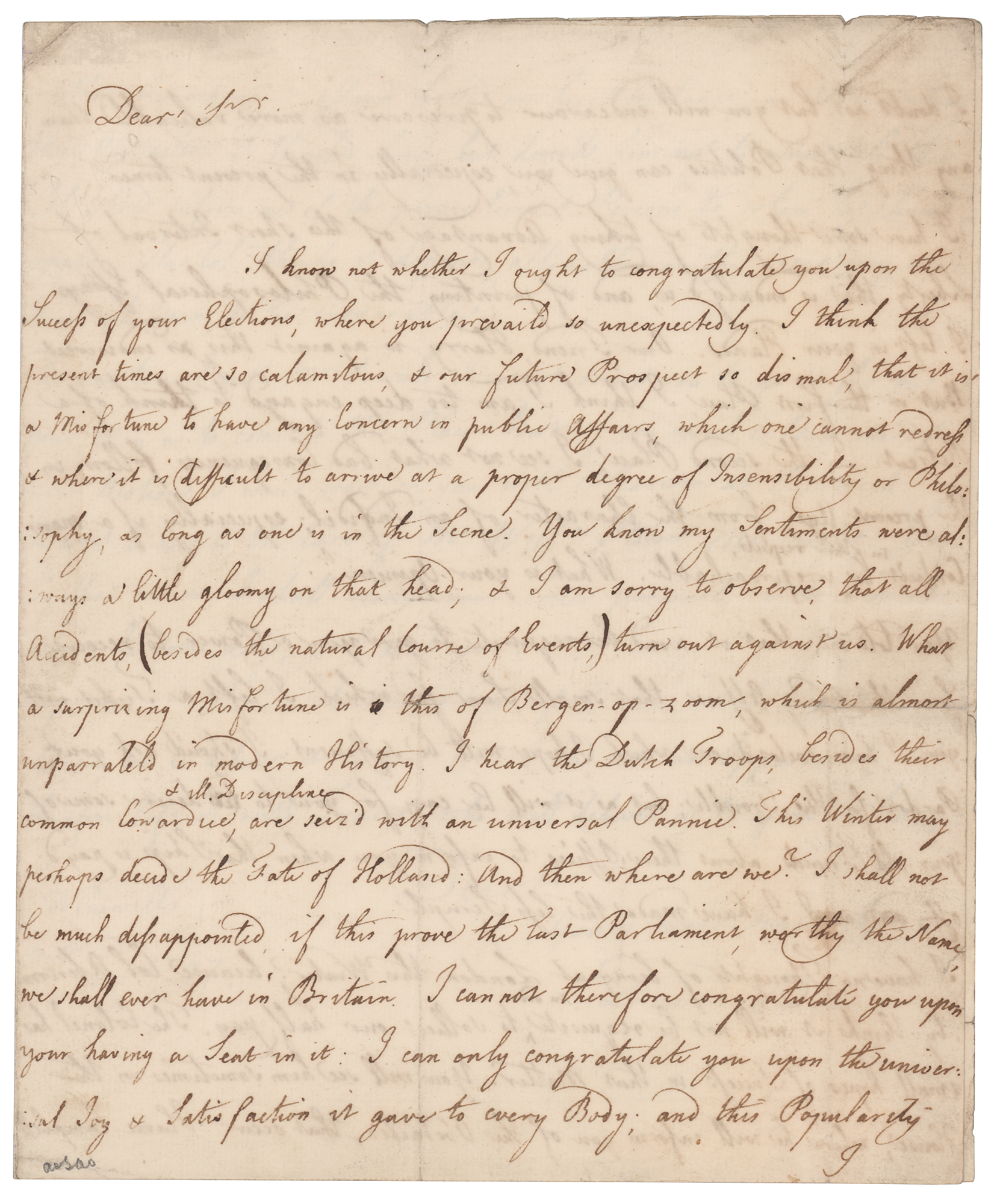 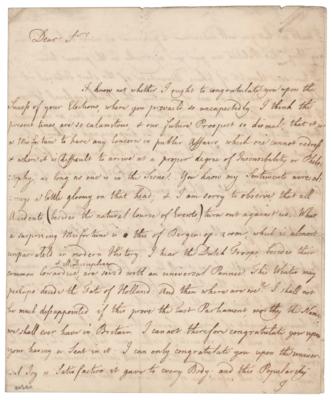 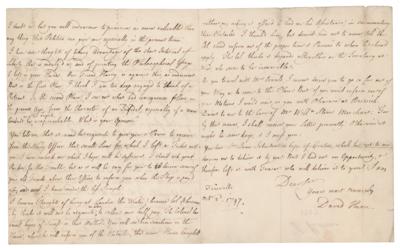 Rare handwritten letter in which Hume comments on Parliamentary elections, the siege in Holland, and his idea "of printing the Philosophical Essays"

Tremendously influential Scottish Enlightenment philosopher, historian, and economist (1711-1776) considered one of the most important figures in the history of Western philosophy. Rare ALS, signed "David Hume," three pages on two adjoining sheets, 7.25 x 8.75, October 2, 1747. Handwritten letter to Scottish politician James Oswald of Dunnikier, in full: "I know not whether I ought to congratulate you upon the Success of your Elections, where you prevailed so unexpectedly. I think the present times are so calamitous, and our future Prospect so dismal, that it is a Misfortune to have any Concern in public affairs, which one cannot redress and where it is difficult to arrive at a proper degree of Insensibility or Philosophy, as long as one is in the Scene. You know my Sentiments were always a little gloomy on that head, & I am sorry to observe that all Accidents (besides the natural Course of Events) turn out against us. What a surprising Misfortune is this of Bergen-op-zoom, which is almost unparalleled in modern History. I hear the Dutch Troops, besides their common cowardice & ill discipline are seized with an universal Panic. This Winter may perhaps decide the Fate of Holland: and then where are we? I shall not be much disappointed, if this prove the last Parliament, worthy the Name, we shall ever have in Britain. I cannot therefore congratulate you upon your having a Seat in it. I can only congratulate you upon the universal Joy & Satisfaction it gave to every Body, and this Popularity I doubt not but you will endeavour to preserve as more valuable than any thing that Politics can give you, especially in the present times.

I have some thoughts of taking advantage of this short Interval of Liberty that is indulged me, and of printing the Philosophical Essays I left in your hands. Our friend Harry is against this as indiscreet. But in the first place, I think I am too deep engaged to think of a Retreat. In the second place, I see not what bad consequences follow in the present age, from the Character of an Infidel; especially if a man's conduct be in other respects, irreproachable. What is your opinion?

You told me that it would be requisite to give you a Power to receive from the Navy Office that small sum for which I left a Ticket with you. I have enclosed one which I hope will be sufficient. I should ask your Pardon for the Trouble, but as it will be least for you to desire some of your old friends about these offices, to inform you when the ship is paid off, and I have made the less Scruple.

I have no Thoughts of being at London this Winter, because Col. Abercromby thinks it will not be requisite in order to solicit our half pay. The Colonel has small hopes of Success in that matter. You will see him sometimes in the House, where he will inform you of the Obstacles, that occur. Hume-Campbell without my asking it offered to lend me his Assistance, in surmounting these obstacles. I thanked him, but desired him not to move, till the Col. should inform me of the proper time & persons to whom he should apply. The Col. thinks it depends altogether on the Secretary at War, who seems to be inexorable.

As you travel with Mrs. Oswald, I cannot desire you to of so far out of your Way as to come to this Place. But if you would inform me of your Motions, I would wait on you with Pleasure at Berwick. Direct to me to the care of Mr. Will'm Stowe Merchant: For by that means, I shall receive your Letter presently. Otherwise it might be some days, & I miss you. You lent Sir James Johnstone a copy of Grotius, which he sent to me, desiring me to deliver it to you. But I had not an opportunity and therefore left it with Frazer who will deliver it to you." In fine condition. This letter was published in 1825 as part of James Oswald's collected correspondence with 'distinguished men of the last century'; he and Hume exchanged many letters. Their correspondence is frequently quoted in scholarly works about Hume.

Though packed with content regarding the political situation in Europe at the time—both at home in Great Britain's Parliament, and abroad as the French Army captured the strategic Dutch border fortress of Bergen op Zoom—the most significant comment in this letter concerns the publication of Hume's "Philosophical Essays," referring to the manuscript of his landmark work, An Enquiry Concerning Human Understanding. He mentions that Henry Home ("Our friend Harry"), a patron of the Scottish Enlightenment, was against publishing the "infidel" work, but that he is unconcerned about repercussions. Ultimately published in 1748, An Enquiry Concerning Human Understanding is regarded as a classic in modern philosophical literature.