Important handwritten contract resolution by Abraham Lincoln, presiding over a disputed order for Austrian arms amidst the Civil War 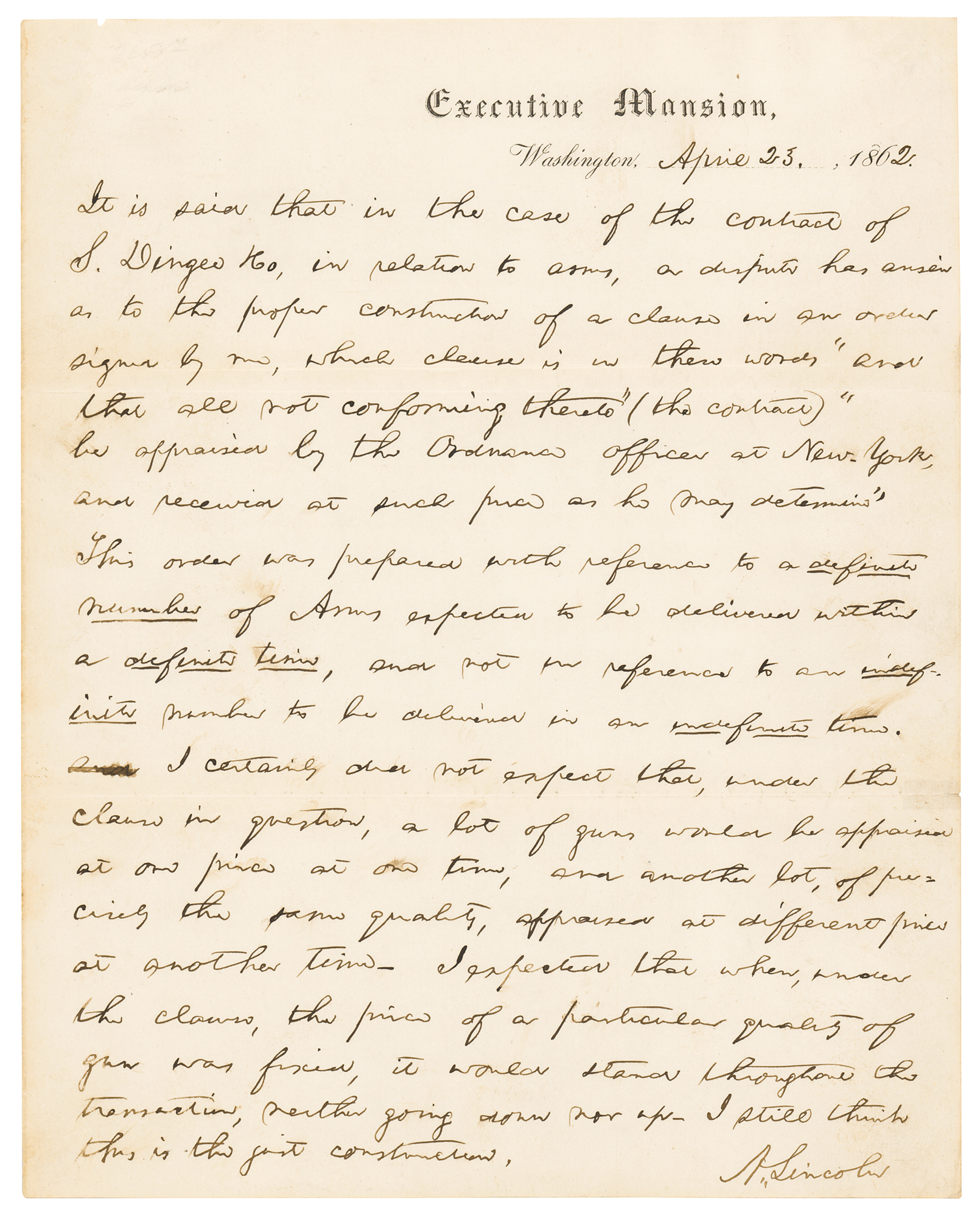 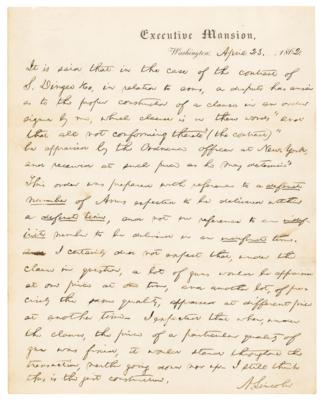 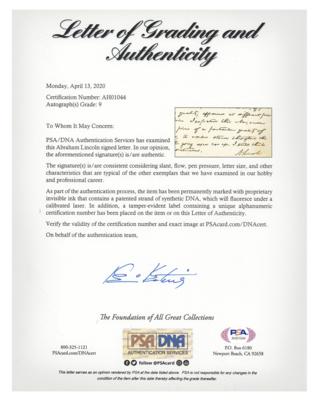 Important handwritten contract resolution by Abraham Lincoln, presiding over a disputed order for Austrian arms amidst the Civil War

Civil War-dated ALS as president, signed “A. Lincoln,” one page, 8 x 10, Executive Mansion letterhead, April 23, 1862. Handwritten letter by President Lincoln, displaying his sharp legal talents while ensuring that the federal government is not defrauded in the requisition of arms during the Civil War. In full: "It is said that in the case of the contract of S. Dingee & Co., in relation to arms, a dispute has arisen as to the proper construction of a clause in an order signed by me, which clause is in these words 'and that all not conforming thereto' (the contract) 'be appraised by the Ordnance officer at New York, and received at such place as he may determine.' This order was prepared with reference to a definite number of Arms expected to be delivered within a definite time, and not in reference to an indefinite number to be delivered in an indefinite time. I certainly did not expect that, under the clause in question, a lot of guns would be appraised at one price at one time, and another lot, of precisely the same quality, appraised at different prices at another time—I expected that when, under the clause, the price of a particular quality of gun was fixed, it would stand throughout the transaction, neither going down nor up—I still think this is the just construction." In fine condition. Accompanied by a full letter of authenticity and grading from PSA/DNA, evaluating the autograph as a "9."

President Lincoln was forced to focus on government procurement as the war effort ramped up, and the federal government's needs made it a prime target for scammers and war profiteers. In this case, Solomon Dingee & Co., a New York firm, had agreed to furnish 53,500 Austrian rifles for $19 apiece. Although ordnance officer Peter V. Hagner considered the offer 'fishy,' General George McClellan thought it was a bargain—given the demand for arms—and the order was ushered through. The first delivery fell short of contract specifications with regard to caliber, weight, material, and finish, and Hagner terminated the entire contract in spite of most guns being serviceable.

The resulting dispute over the contract rose all the way to the office of the commander-in-chief. Asked to intervene, President Lincoln ordered Hagner to accept and pay for all rifles that met the contract specifications, reject all unusable arms, and purchase the remainder at a reasonable price. He then assigned Hagner to a commission to investigate the contract, appointing Silas Crispin in his place. Hagner had dutifully developed a valuation schedule for pricing arms not deemed sufficient to fulfill the contract, but Crispin insisted on evaluating each separate shipment at market value at the time of its delivery. In issuing his opinion, President Lincoln denounced Crispin's practice and sided with the contractor. As Austin G. Roe points out while discussing this conflict in his article 'Lincoln: The First Board of Contract Appeals,' Lincoln's ruling complied with one of his guiding political philosophies: 'It is as much the duty of Government to render prompt justice against itself in favor of citizens as it is to administer the same between private individuals.'