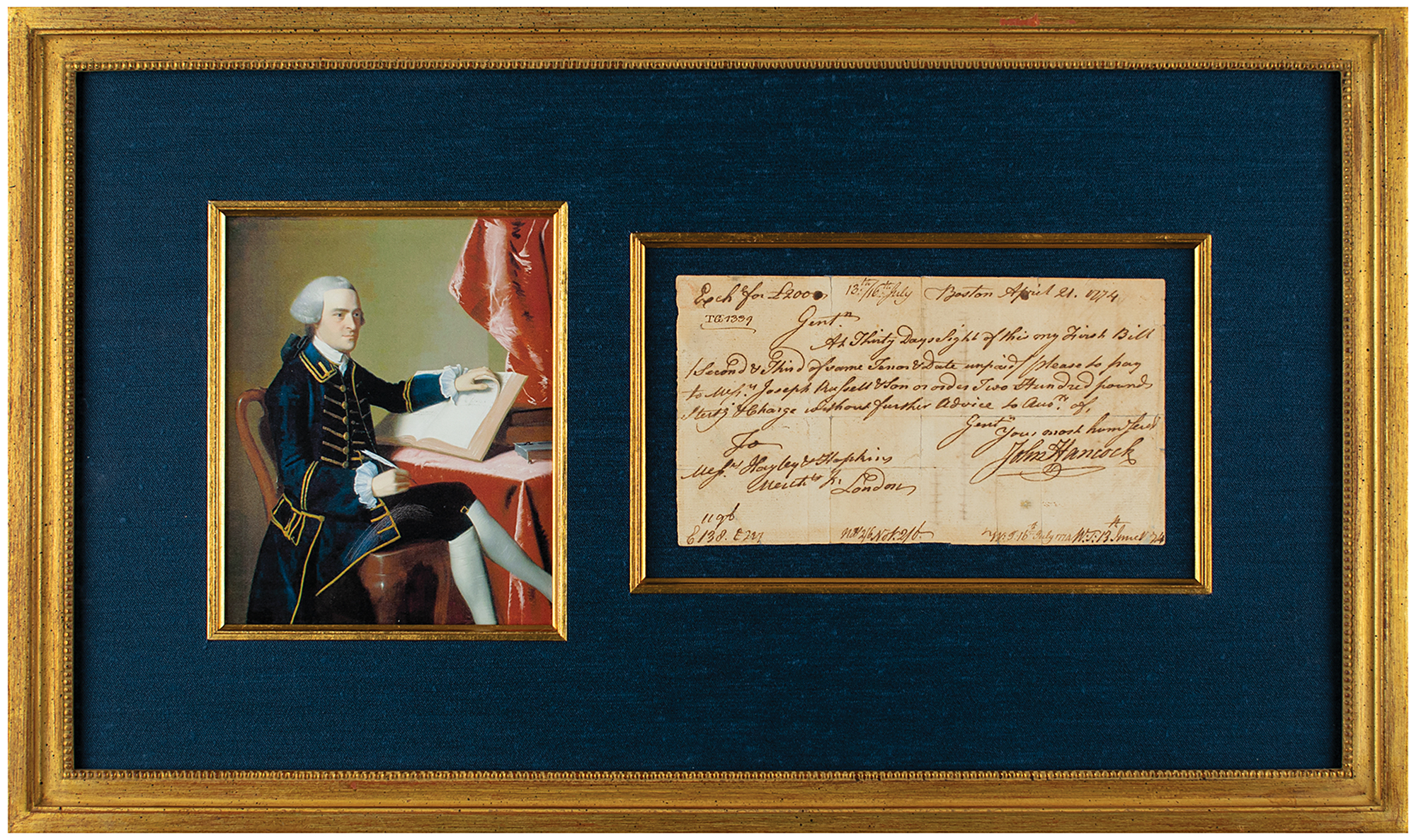 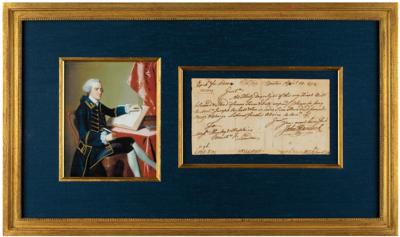 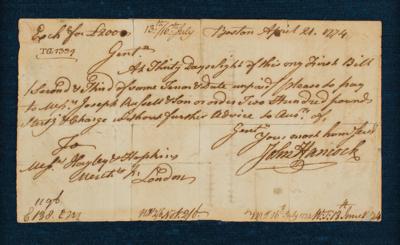 ADS, signed “Your most hum. servt., John Hancock,” one page, 7.75 x 4.25, April 21, 1774. Handwritten bill of exchange addressed from Boston to his London bankers "Hayley & Hopkins," in full: "Gentlemen, At thirty days sight of this my First Bill (Second & Third of same Tenor & Date unpaid) Please to pay to Messrs. Joseph Russelll & Son or order Two Hundred Pounds Sterl'g & Charge without further advice." Handsomely mounted, cloth-matted, and framed with a portrait to an overall size of 22 x 13; a color copy of the document's verso on the frame's backing shows that Russell, a wealthy merchant and later privateer, endorsed the note over to Bristol merchants Thomas & Griffiths, who were involved in the American trade. In very good to fine condition, with possible repairs to split folds (not examined out of the frame).

On March 5, 1774, Hancock made the annual speech commemorating the Boston Massacre four years earlier, thereby dispelling any doubt about whose camp he was in. Hancock called the British troops just about every name in the book, from ‘villainous’ to ‘murderers,’ in that dramatic oration: ‘The Town of Boston, ever faithful to the British Crown, has been invested by a British fleet, the troops of George the third have crossed the Atlantic, not to engage an enemy, but to assist a band of traitors in trampling on the rights and liberties of his most loyal subjects.’ News of the Tea Party and Hancock’s role in it had arrived in London; now word of his inflammatory speech speeded there. The British government and its great commercial interests determined that for both Hancock and Boston, this was the last straw. And business being business, part of the anxiety of Hayley and Hopkins was that Hancock owed them quite a lot of money (almost 11,000 pounds sterling), political affairs were intruding, and Hancock’s revenues were down and he was selling some of his ships.

The Hancock Papers on deposit in the Massachusetts Historical Society indicate that, upon its arrival in London, this very bill of exchange was bounced. Hayley and Hopkins refused to pay it. The book The House of Hancock by W.T. Baxter mentions this exact bill of exchange also, noting that ‘Hayley became thoroughly frightened about the huge debt,’ especially so because the political crisis was hurting American business and some American merchants were delaying remittances as a result. In July [1774], Hayley took the extreme step of refusing to honor Hancock’s bills, writing to him: ‘The unhappy state of American trade is very alarming…and has forced us to the disagreeable Necessity of Suffering some of your bills to go back protested.’

Dishonoring this check was a shot across the bow, a clear warning that Hancock could, and perhaps would, be financially ruined. Such action against one of America’s most successful merchants, one prosperous enough to be assumed to be capable of riding out a financial storm, was likewise a bold message to other Americans that they would not be immune from retaliation if the anti-British frenzy continued. Thus, this bill of exchange represents the blowback of political dissent that preceded the Revolution, and serves as an illustration of truism that the Founding Fathers did indeed risk ‘our lives, our fortunes and our sacred honor.’ A famous and milestone document in the life of John Hancock.