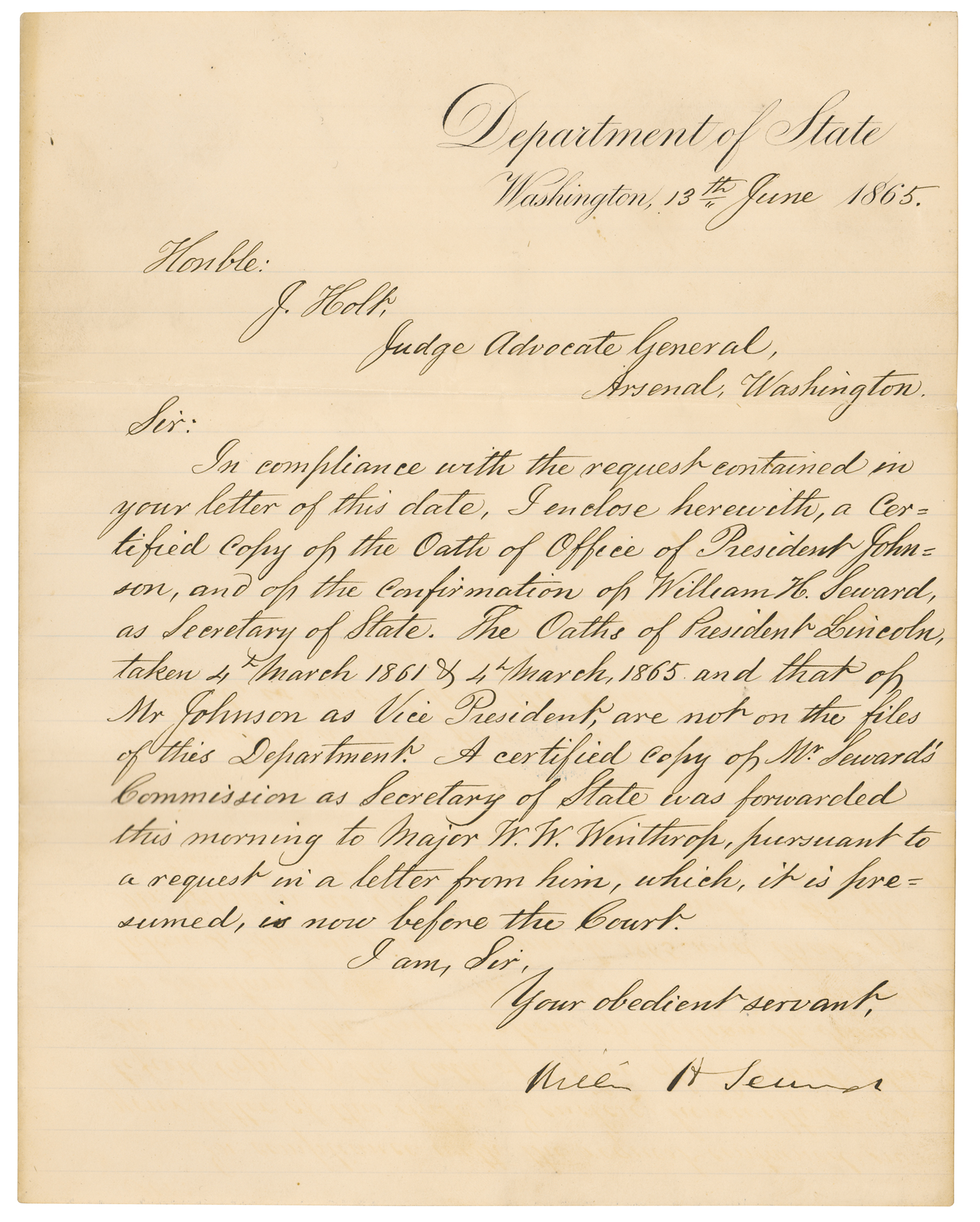 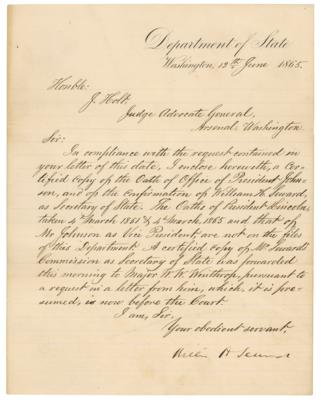 Significant LS, one page, 7.75 x 9.75, Department of State letterhead, June 13, 1865. Important letter to Judge Advocate General Joseph Holt, in full: "In compliance with the request contained in your letter of this date, I enclose herewith, a certified copy of the Oath of Office of President Johnson, and of the confirmation of William H. Seward, as Secretary of State. The Oaths of President Lincoln, taken 4th March 1861 and 4th March, 1865 and that of Mr. Johnson as Vice President, are not on the files of this Department. A certified copy of Mr. Sewardʼs Commission as Secretary of State was forwarded this morning to Major W. W. Winthrop, pursuant to a request in a letter from him, which, it is presumed, is now before the Court." In fine condition, with a few light creases.

In an attempt to dismantle the federal government and revive the Confederate cause, assassin John Wilkes Booth orchestrated a plot to kill President Abraham Lincoln and several members of his cabinet on the night of April 14, 1865. While Booth's’ assassination on LIncoln was effective, the one on the life of Secretary of State William H. Seward was not. Conspirator Lewis Powell went to Seward’s home and attacked him with a large knife that, despite causing grievous injuries, was mostly deflected by a metal splint worn by Seward to heal a previously broken jaw. Believing Seward dead, Powell fled the scene, injuring several others in the process, and was apprehended the following day.

The offices that the victims, or intended victims, held were key elements of the conspiratorsʼ crime. It was common knowledge that Lincoln had been president, Seward the secretary of state, and Andrew Johnson, also an intended target, the vice president. As proof that the conspirators had committed those acts, the prosecution had to offer substantial evidence that Lincoln, Seward, and Johnson had, in fact, legally held those offices at the time of the attacks on April 14, 1865. For Judge Advocate General Joseph Holt, the chief prosecutor in the trial of the accused conspirators, this would be essential to obtaining convictions for the crimes charged.

On June 13, 1865, Major W. W. Winthrop wrote to Seward requesting a certified copy of his commission as secretary of state, with Holt, later that same day, also writing to Seward and requesting certified copies of Lincolnʼs 1861 and 1865 oaths of office as president, Johnson's oaths of office as both vice president and president, and, again, his own commission as state secretary. In response, Seward wrote this very letter, directed to Holt at the Arsenal in Washington, D.C., where the Military Commission held the trial. As stated, Seward sent some of the requested documents, but noted that the State Department did not have Lincoln's original oaths of office. Seward’s documents, in addition to Johnson’s oath of office as president, were enough to confirm their federal posts and, on June 29, 1865, all eight charged were found guilty of conspiracy to kill the president. Powell was one of our conspirators executed on July 7, 1865.

Written a month after the assassination, this extraordinary letter represents a vital part of the Military Commission trial of the conspirators in the assassination of President Abraham Lincoln. Without the evidence that Secretary of State Seward conveyed therein, the prosecution likely could not have made its case.