Gauguin writes to Pissarro, commenting on Monet, Degas, and his own work: "I can only do one thing: paint. For everything else, I’m an idiot" 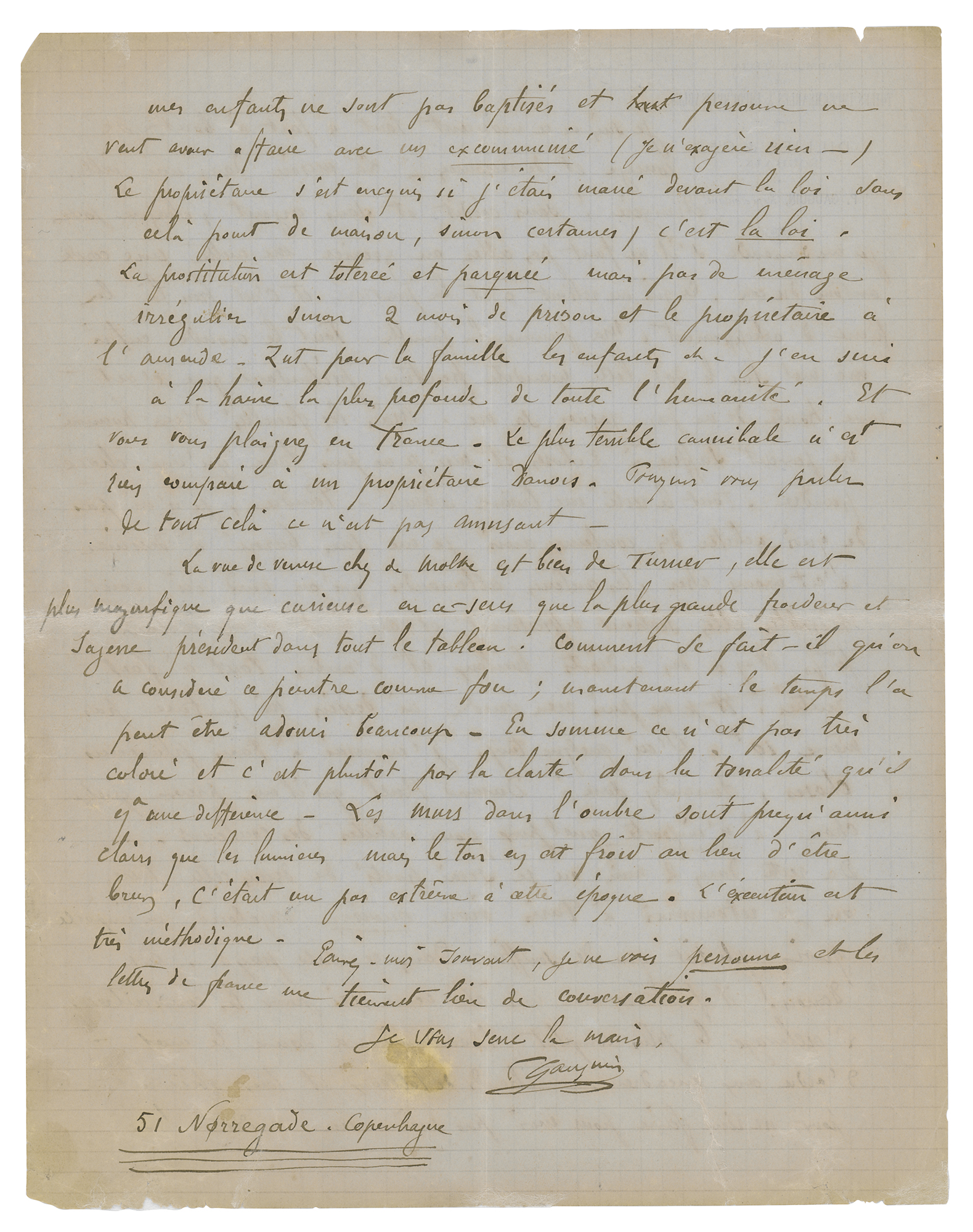 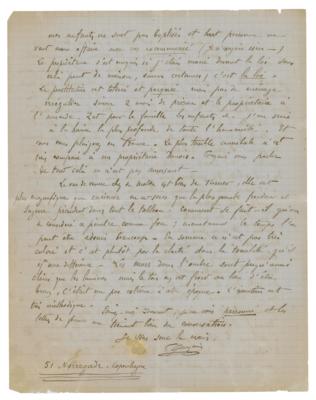 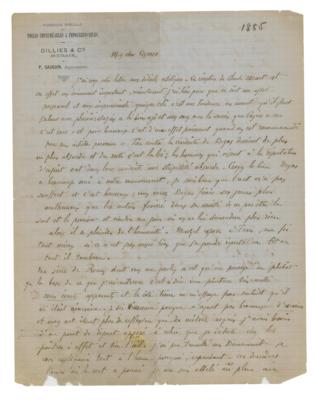 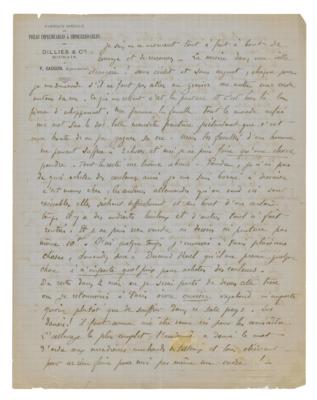 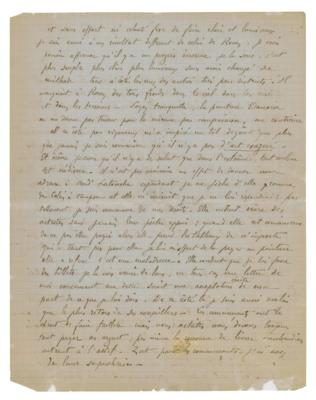 Gauguin writes to Pissarro, commenting on Monet, Degas, and his own work: "I can only do one thing: paint. For everything else, I’m an idiot"

ALS in French, signed “Gauguin,” two pages both sides, 8.25 x 10.75, Dillies & Cie letterhead, [no date, but annotated 1885 in pencil]. Important handwritten letter to his friend and mentor Camille Pissarro, commenting on fellow painters Claude Monet and Edgar Degas, and offering an assessment on the state of his own work and finances. In full (translated): "I’ve received your letter with artistic details. Claude Monet’s reception is indeed an important event, but I’m quite afraid that it’s a personal effect and not an Impressionist one, even if it is a forward tendency that has to be greeted with pleasure. Cazin played quite a role there, and you know that’s rare with the success that Cazin has had, and moreover, there’s a powerful effect when one is recommended by an artist who has arrived. On the other hand, Degas’s behavior is becoming more and more absurd, and besides, it’s a law that men who aim to have a reputation as intellectuals are absurdly stupid in their behavior. Believe me, Degas has done our movement a lot of harm; I know that the art hasn’t suffered, and that’s fortunate. You’ll see Degas end his days more unhappy than the others, offended in his vanity by not being the only one and the first, and there will come a day when no one asks him anything any more; then he’ll complain about humanity. Menzel is exhibiting in Paris: really, so much the better. If it isn’t as good as its great reputation, sooner or later it will fall.

My Rouen series that you talk about is only a transition, or rather only the foundation for what I’ve gotten a glimpse of, that is, a very matte painting without apparent variations, and the dull side doesn’t frighten me, since I feel that it was necessary for me. I say ‘necessary’ because, since I don’t have much practice and my art is more a matter of reflection than of an acquired craft, I needed a starting point opposed to what I detest in painters who focus on effects and drawing the eye. I haven’t worked much in Denmark, I’ll explain why in a moment; nevertheless, as things have been turning green recently, I’ve settled down to work outdoors, and without effort or an established intention to make something bright and luminous, I’ve arrived at a different result from that of Rouen. I think I can affirm that there’s enormous progress, I feel it: it’s more supple, brighter, more luminous, without having changed method, the one group alongside the other with very little distance. At Rouen, there was a lack of cool tones in the sky, in the greens, and in the soils. Don’t worry, Danish painting doesn’t make me afraid for mine in comparison. On the contrary, this not very vigorous style has inspired such distaste in me that I’m more convinced than ever that there is no such thing as exaggerated art. And I even think that there is nothing healthy outside of the extremes; every middle is mediocre. In effect, it’s not necessary to give Madame Latouche my address; nevertheless, I’m thumbing my nose at her and running from her to Tampon, and she wrote me not to reply to her like that. I’m convinced of my rights. She intends to live from artists without ever lending them support; when she’s convinced that she won’t get paid, then she takes anyone’s pictures, it doesn’t matter whose. So much the worse for her. I offered to pay her in paintings; she refused; that’s a blunder. She would like me to draw up some notes for her; I see where she’s going with this. In any case, a letter from me about my debt would be a written acknowledgment on my part of what I owe her. Where that’s concerned, I’m as malicious as the most crafty of her advisers. Dealers have the right to declare bankruptcy, but we artists always have to pay for everything in cash; there’s not even the expedient of handing over merchandise counted as an asset. A fig for dealers! I’ve had enough of their swindles.

Right now I’m entirely out of courage and expedients. Poverty in a strange town! Without credit and without money. Every day I ask myself whether I shouldn’t go to the attic and put a rope around my neck. What holds me back is painting, and that’s the stumbling block right there. My wife, my family, the whole world is after me for this damned painting, claiming that it’s shameful not to earn one’s living. But human abilities aren’t sufficient for two things, and for my part, I can only do one thing: paint. For everything else, I’m an idiot. Painting: I don’t have anything to buy paints with, so I’m limited to drawing; that’s less expensive. The German paints they sell here are dreadful; they don’t dry well, and after a certain length of time, some areas are oily and others are entirely soaked in. And I can’t sell anything, neither a drawing or a painting, not even 10 francs. I’ll send some things to Paris in a bit, so ask Durand Ruel to take something of mine, the price doesn’t matter, in order to buy paint. For the rest, in two months either I will have left this earth or I will return to Paris to live as a worker, a vagabond, I don’t care what, rather than suffering in this filthy country. The Danes! It’s necessary to come here as I have in order to get to know them. The most complete slavery: the academy has given the word to the framers who sell pictures, and they all obey, to do nothing for me, not even make a frame!

My children are not baptized, and no one wants to have anything to do with an excommunicated man. (I’m not exaggerating anything.) The landlord inquired whether I was legally married: without that, no house; otherwise, certainly, it’s the law. Prostitution is tolerated and penned up in designated spaces, but no irregular households; otherwise, two months in prison, and the landlord is fined. A fig for the family, the children, etc.! I’m feeling the deepest hatred toward all humanity as a result. And you complain in France. The most terrible cannibal is nothing compared to a Danish landlord. Why should I tell you all this? It’s not entertaining.

The Venetian street at Molbe’s is indeed by Turner. It’s more magnificent than curious, in the sense that the greatest coldness and sobriety preside throughout the picture. How is it that people have considered this painter a fool? Perhaps time has now sweetened him a great deal. In sum, it’s not very highly colored, and it’s more on account of the brightness in the tonality that there’s a difference. The walls in shadow are almost as bright as the illuminated ones, but the tone is cold instead of being dusky. It was an extreme step at the time. The execution is very methodical. Write to me often. I don’t see anyone, and letters from France keep me supplied with conversation." In very good to fine condition, with some light stains, and small bits of silking to reinforce chipping to the bottom edges.

Gauguin writes from Copenhagen, where he moved with his family in 1884 and found work as a tarpaulin salesman—as evidenced by this "Dillies & Cie" letterhead, advertising the custom manufacture of waterproof textiles. The endeavor was a failure: Gauguin could not speak Danish, and the Danes did not want French tarpaulins. Furthermore, he desired to make his living from painting at all costs. Finding himself broke in Denmark, he enlists the help of his influential friend: "Ask Durand Ruel to take something of mine, the price doesn’t matter, in order to buy paint." He would indeed return to Paris, in June 1885, and took a series of menial jobs to support himself, producing little in the way of artwork. Gauguin was invited to exhibit at the eighth Impressionist exhibition in 1886, and would soon abandon the style in favor of the post-Impressionist Cloisonnism for which he is best known.