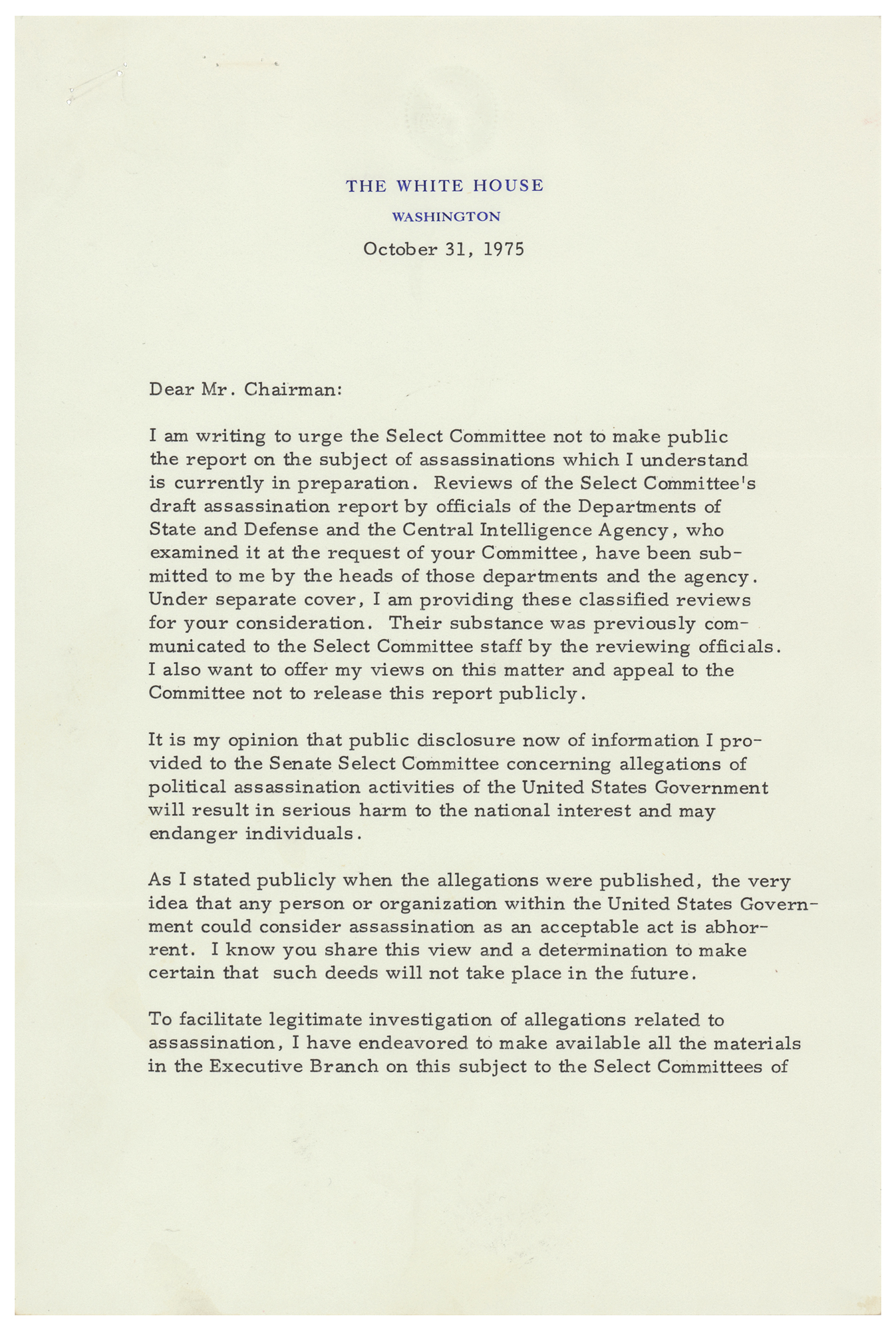 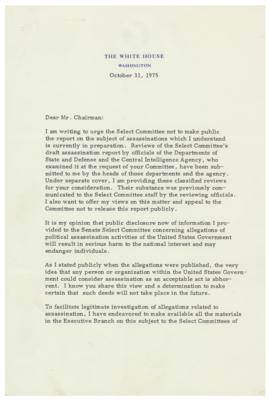 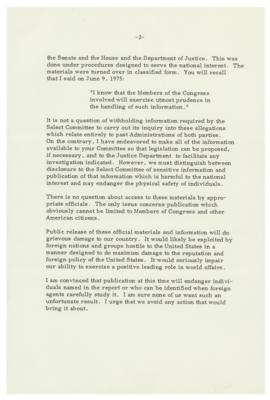 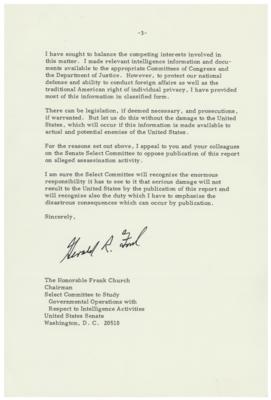 TLS as president signed “Gerald R. Ford,” three pages, 7 x 10.5, White House letterhead, October 31, 1975. Important letter to Senator Frank Church, outlining the reasons why his committee's Congressional report involving US political assassination activities should remain classified. In part: "I am writing to urge the Select Committee not to make public the report on the subject of assassinations which I understand is currently in preparation. Reviews of the Select Committee's draft assassination report by officials of the Departments of State and Defense and the Central Intelligence Agency, who examined it at the request of your Committee, have been submitted to me by the heads of those departments and the agency…I also want to offer my views on this matter and appeal to the Committee not to release this report publicly.

It is my opinion that public disclosure now of information I provided to the Senate Select Committee concerning allegations of political assassination activities of the United States Government will result in serious harm to the national interest and may endanger individuals.

As I stated publicly when the allegations were published, the very idea that any person or organization within the United States Government could consider assassination as an acceptable act is abhorrent. I know you share this view and a determination to make certain that such deeds will not take place in the future.

To facilitate legitimate investigation of allegations related to assassination, I have endeavored to make available all the materials in the Executive Branch on this subject to the Select Committees of the Senate and the House and the Department of Justice. This was done under procedures designed to serve the national interest. The materials were turned over in classified form. You will recall that I said on June 9, 1975: 'I know that the Members of the Congress involved will exercise the utmost prudence in the handling of such information.'

It is not a question of withholding information required by the Select Committee to carry out its inquiry into these allegations which relate entirely to past Administrations of both parties. On the contrary, I have endeavored to make all of the information available to your Committee so that legislation can be proposed, if necessary, and to the Justice Department to facilitate any investigation indicated. However, we must distinguish between disclosure to the Select Committee of sensitive information and publication of that information which is harmful to the national interest and may endanger the physical safety of individuals…

Public release of these official materials and information will do grievous damage to our country. It would likely be exploited by foreign nations and groups hostile to the United States in a manner designed to do maximum damage to the reputation and foreign policy of the United States. It would seriously impair our ability to exercise a positive leading role in world affairs.

I am convinced that publication at this time will endanger individuals named in the report or who can be identified when foreign agents carefully study it. I am sure none of us want such an unfortunate result. I urge that we avoid any action that would bring it about.

I have sought to balance the competing interest involved in this matter. I made relevant intelligence information and documents available to the appropriate Committees of Congress and the Department of Justice. However, to protect our national defense and ability to conduct foreign affairs as well as the traditional American right of individual privacy, I have provided most of this information in classified form.

There can be legislation, if deemed necessary, and prosecutions, if warranted. But let us do this without the damage to the United States, which will occur if this information is made available to actual and potential enemies of the United States.

For the reasons set out above, I appeal to you and your colleagues on the Senate Select Committee to oppose publication of this report on alleged assassination activity.

I am sure the Select Committee will recognize the enormous responsibility it has to see to it that serious damage will not result to the United States by the publication of this report and will recognize also the duty which I have to emphasize the disastrous consequences which can occur by publication." In fine condition, with staple holes in the upper left corner. Accompanied by a photocopy of Church's reply to President Ford, vowing to make the report public in spite of the president's pleas.

The recipient of this letter, Senator Frank Church of Idaho, served as chairman of what was formally known as the United States Senate Select Committee to Study Governmental Operations with Respect to Intelligence Activities—more commonly called the 'Church Committee.' It was formed in 1975 to investigate alleged abuses by the CIA, NSA, FBI, and IRS—including allegations of covert programs involving assassination attempts on foreign leaders.

In spite of Ford's plea, the Committee went through with the publication of an interim report titled "Alleged Assassination Plots Involving Foreign Leaders" on November 20, 1975, which investigated alleged attempts to assassinate foreign leaders—including Patrice Lumumba of Zaire, Rafael Trujillo of the Dominican Republic, Ngo Dinh Diem of South Vietnam, Gen. Rene Schneider of Chile, and Fidel Castro of Cuba. In response, under recommendations and pressure by the Committee, President Ford issued Executive Order 11905 to ban officially sanctioned assassinations of foreign leaders.

It is noteworthy that in his own career in Congress, Ford took part in the Warren Commission investigation of the assassination of President John F. Kennedy—concluding that Oswald acted entirely alone—and had experienced two attempts on his own life just one month earlier. On September 5th, Manson family member Lynette 'Squeaky' Fromme aimed a gun at President Ford but was restrained by Secret Service; just a few weeks later on September 22nd, Sara Jane Moore fired two gunshots at him but missed.

Between the important content, implications for national security, and Ford's own experience as an assassination investigator and subject, this is certainly the most intriguing Ford presidential letter to ever come to market.