Far from Washington, a 17-year-old JFK, Jr. writes from a Wyoming ranch in the summer of ‘78—“I have to go to bed now cause we have to get up at 5:00 AM to herd cattle all day again” 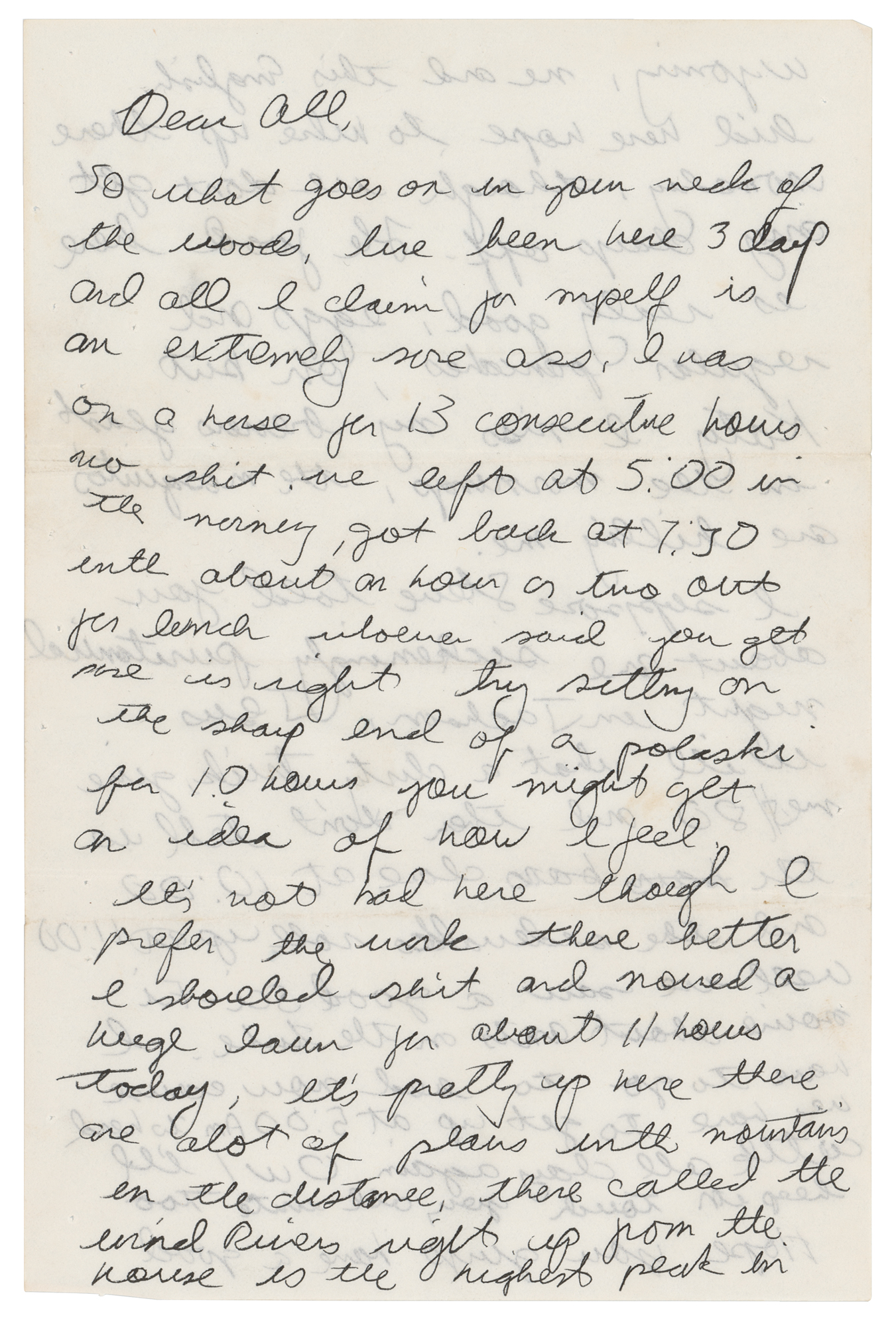 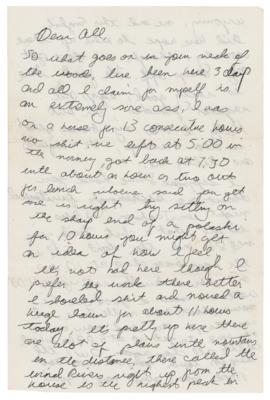 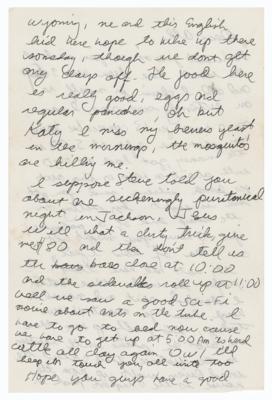 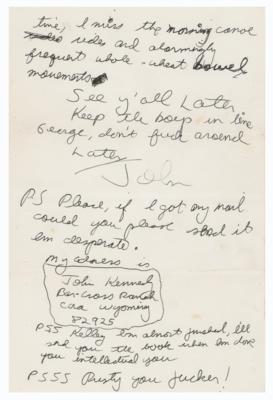 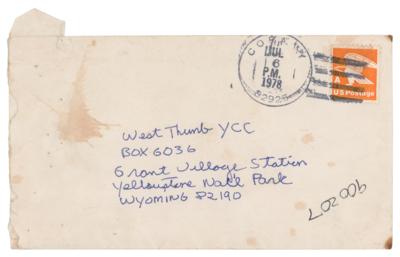 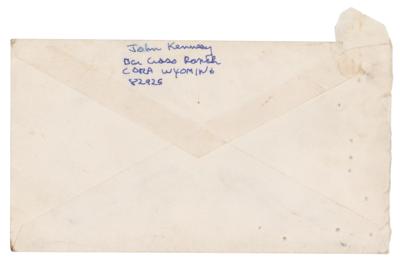 Far from Washington, a 17-year-old JFK, Jr. writes from a Wyoming ranch in the summer of ‘78—“I have to go to bed now cause we have to get up at 5:00 AM to herd cattle all day again”

ALS signed “John,” three pages, 6 x 9, July 6, 1978. Handwritten letter from 17-year-old JFK, Jr., to his former counselors and fellow campers at the West Thumb Youth Conservation Corps, a high school work camp in Yellowstone National Park that he had briefly attended before his mother, former First Lady Jacqueline Kennedy, transferred him to Bar Cross Ranch in Cora, Wyoming, from where this letter is addressed. It reads, in full: “Dear all, So what goes on in your neck of the woods, I’ve been here 3 days and all I can claim for myself is an extremely sore ass. I was on a horse for 13 consecutive hours, no shit, we left at 5:00 in the morning, got back at 7:30 until about an hour or two out for lunch, whoever said you get sore is right, try sitting on the sharp end of a polaski for 10 hours you might get an idea of how I feel. It’s not bad here though. I prefer the work there better, I shoveled shit and mowed a huge lawn for about 11 hours today. It’s pretty up here, there are a lot of plains in the mountains in the distance, there called the Wind Rivers, right up from the house is the highest peak in Wyoming, me and this English kid here hope to hike up there someday, though we don’t get any days off. The food here is really good, eggs and regular pancakes, oh but Katy I miss my brewers yeast in the mornings, the mosquitos are killing me. I suppose Steve told you about one sickeningly puritanical night in Jackson. Jesus, Will what a dirty trick, give me $80 and then don’t tell us the bars close at 10:00 and the sidewalks roll up at 11:00. Well we saw a good sci-fi movie about ants on the tube. I have to go to bed now cause we have to get up at 5:00 AM to herd cattle all day again. Ow! I’ll keep in touch, you all write too. Hope you guys have a good time, I miss the morning canoe rides and alarmingly frequent whole-wheat bowel movements. See y’all later. Keep the boys in line George, don’t fuck around. Later.” Kennedy adds a few postscripts: “PS Please, if I got any mail could you please send it I’m desperate. My address is John Kennedy, Bar Cross Ranch, Cora Wyoming, 82925,” “PSS Kelley I’m almost finished, I’ll send you the book when I’m done you intellectual you,” and “PSSS Rusty you fucker!” Includes two vintage glossy 4.25 x 3.5 photos of JFK, Jr. with West Thumb campers (Kennedy is wearing plaid and has curly brown hair), and the original hand-addressed mailing envelope, with Kennedy again incorporating his signature into the return address field on the reverse flap. In fine condition.

Accompanied by a letter of provenance from the original recipients, counselors from the West Thumb Youth Conservation Corps, who write: “We got to know John because my husband William, in the summer of 1978, was the director of a work camp located in West Thumb, Yellowstone National Park. It was a paid summer work program called Youth Conservation Corps (YCC) and in this case employed high schoolers primarily from Wyoming. Many were Mormon. In June, a 17 year old John Jr. showed up. It was a surprise to all of us on staff and even more so to the other kids. The attention / idolization he received from them might’ve been too much. [His] Mom Jackie called William…after about 10 days and had a phone conversation about this apparent mismatch and decided that her son would do better at the Bar Cross Ranch in Cora, Wyo. It was owned by an acquaintance. She mailed money for a bus ticket from Jackson Hole to the ranch. So about 2 weeks into the session William…drove him to the Jackson bus station.

John’s humorous letter was a follow up to those events…Jackie followed up with a thank you note to William but sorry to say * gasp * it was thrown out. Long story. We have enclosed 2 photos of John with some of the campers. It was probably taken on a Saturday, our field trip day. We saw John as a good and respectful kid, obviously much more sophisticated and cosmopolitan than the other campers. He did dishes along with everyone else and helped with camp chores in addition to the work project…William recalls that he was told that the reason John came to YCC was that there was a connection between Student Conservation (SCA) and the Kennedys. SCA was contracted to operate the program.”