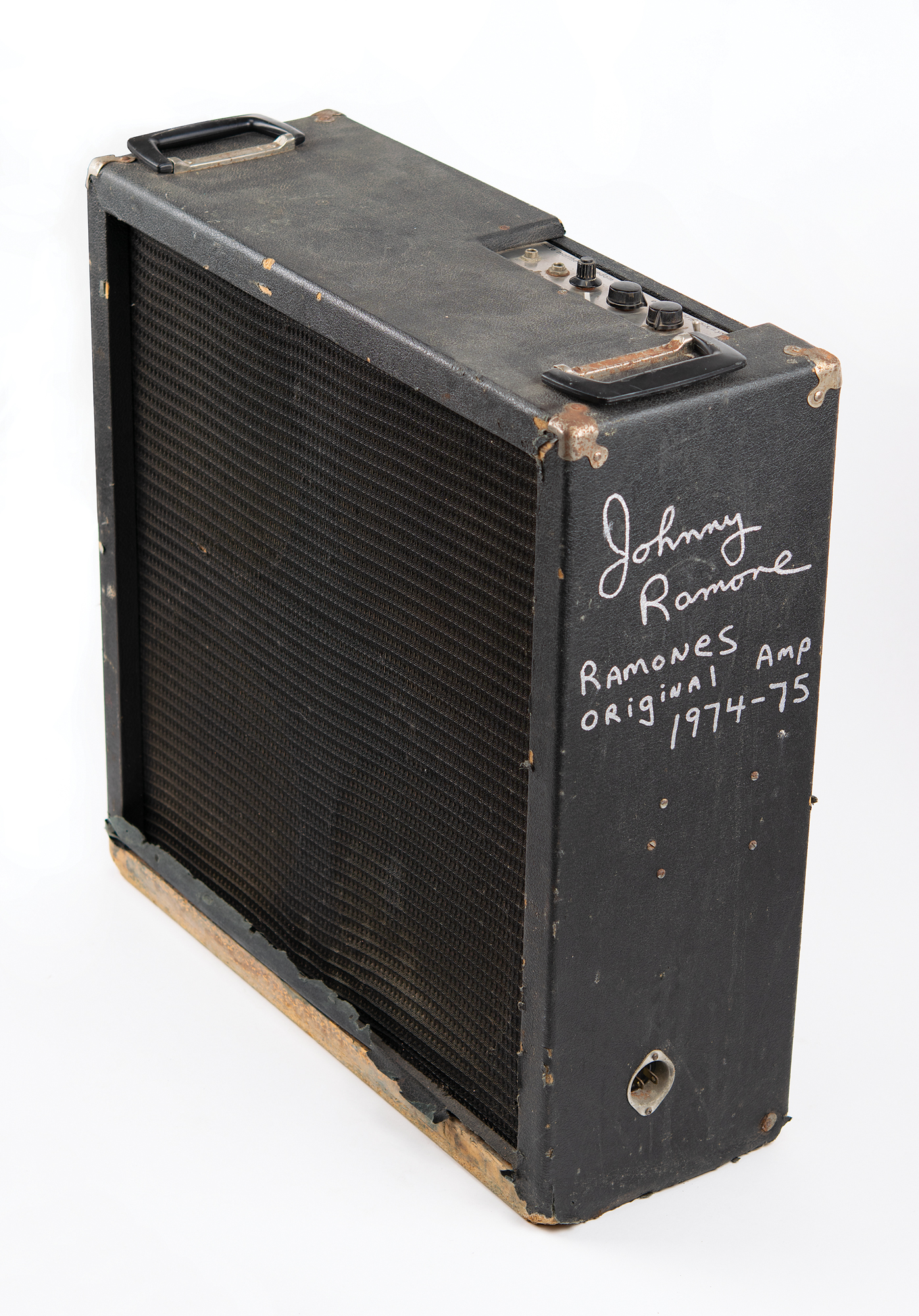 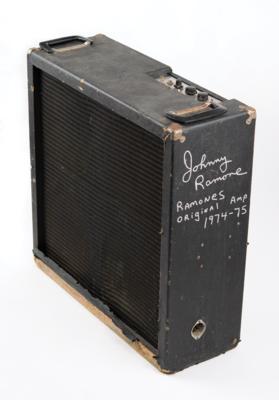 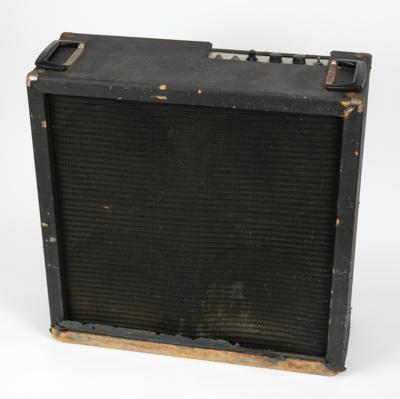 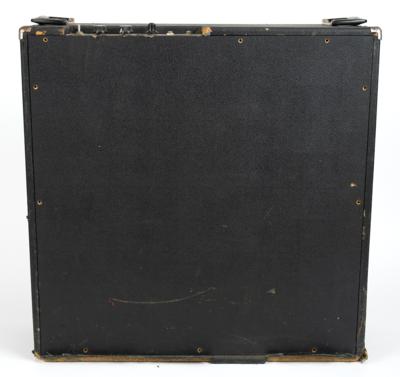 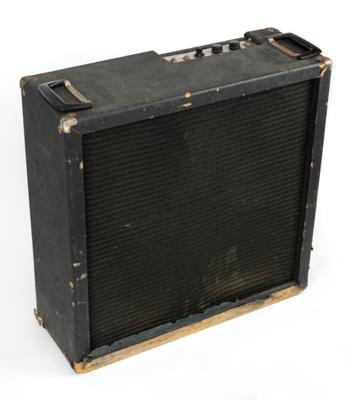 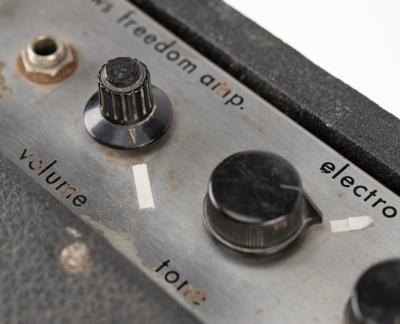 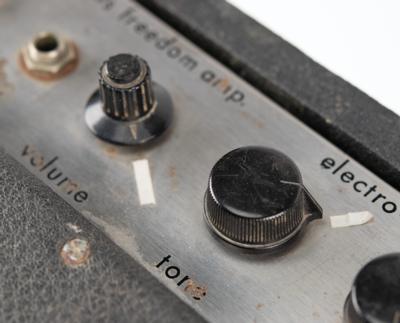 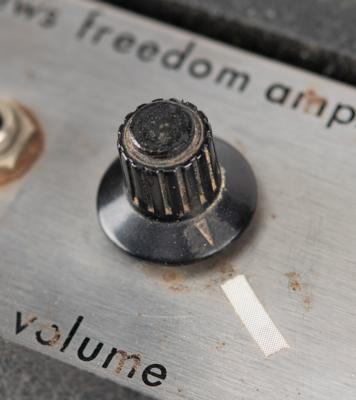 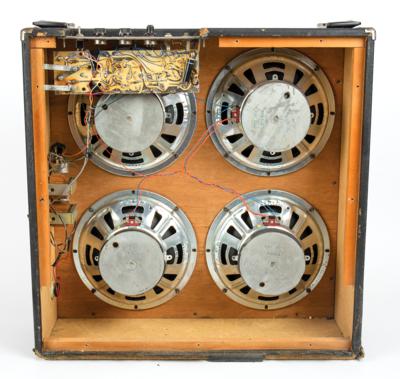 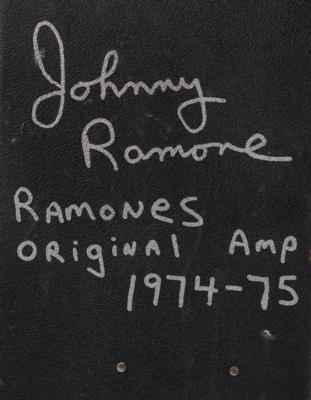 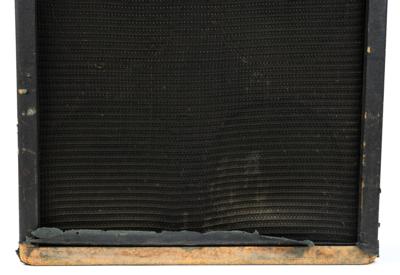 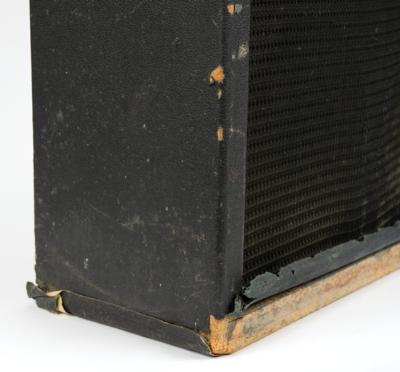 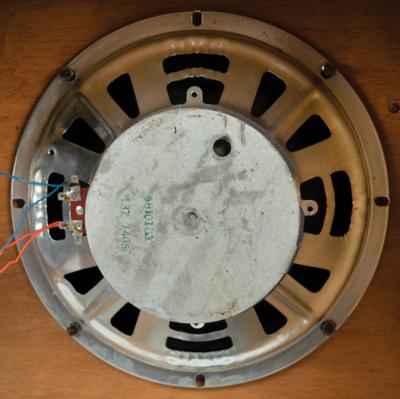 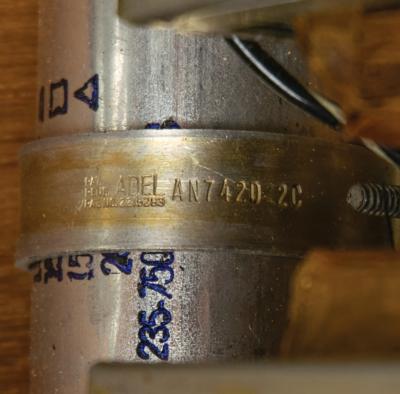 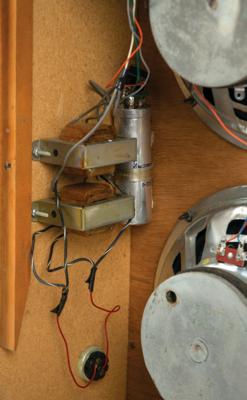 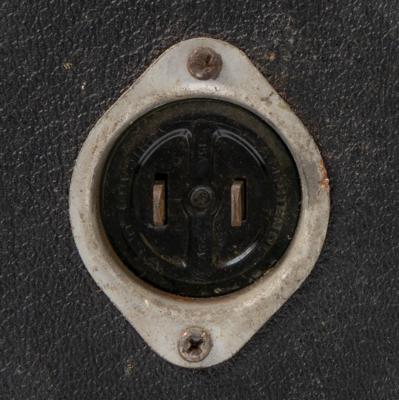 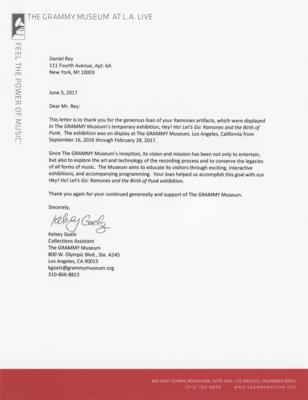 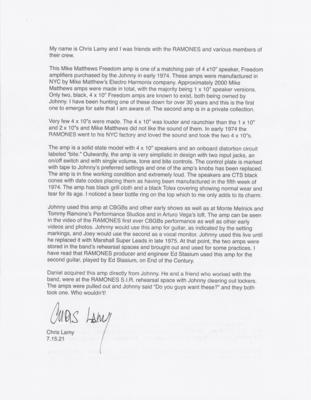 
Exceedingly rare Mike Matthews Freedom amplifier personally-owned and -used by Johnny Ramone (John Cummings) of punk rock legends the Ramones, signed on the right side in silver ink, "Johnny Ramone, Ramones original amp, 1974-75." The amp, 24? x 24? x 9?, is one of a matching pair of 4 x 10? speaker Freedom amps purchased by Cummings in early 1974. Freedom amps were manufactured in New York City by Mike Matthews’ Electro-Harmonix company, and of the approximately 2000 total Matthews amps that were produced, the majority being 1 x 10? speaker versions, only two black 4 x 10? Freedom amps are known to exist, both of which were owned by Cummings; the second Freedom 4 x 10? remains in a private collection. Accompanied by a detailed letter of authenticity from Chris Lamy, a close friend and historian of the Ramones.

Cummings used this amp live at CBGBs and at various other early Ramones shows, while also routinely lugging it to Monte Melnick and Tommy Ramone’s Performance Studios and to Arturo Vega’s loft throughout 1974 and 1975. As indicated by the tape setting markings, Cummings used this amplifier for guitar, with Joey Ramone using the second Freedom amp as a vocal monitor while the band rehearsed. Cummings used this amp live until he replaced it with Marshall Super Leads in late 1975, and, from then on, the two Mike Matthews amps were stored in the band’s rehearsal spaces and on occasion brought out and used for practice. According to Ramones producer and engineer Ed Stasium, he played through this amp for the second guitar on the band’s 1980 End of the Century LP: ‘It was a practice amp for him, but that’s what I used to do my tracking, through all the pain and the glory of making that album.’ This amp can be seen in the video of the Ramones’ first ever CBGBs performance, as well as in other early videos and photos.

The Freedom amp is a solid state model with 4 x 10? speakers and an onboard distortion circuit labeled “bite.” Outwardly, the amp is very simplistic in design with two input jacks, an on/off switch, and single volume, tone, and bite controls. The control plate is marked with tape to Cummings’ preferred settings and one of the amp’s knobs has been replaced. The amp is in fine working condition and very loud. The speakers are CTS black cones and the date code places them as having been manufactured in the fifth week of 1974. The amp has black grill cloth and a black Tolex covering showing normal wear and tear for its age; a beer bottle ring to the top only adds to its punk charm.

Matthews made very few 4 x 10? Freedoms, in large part due to the simple fact that he did not enjoy its sound, which was considerably louder and raunchier than the 1 x 10? and 2 x 10? variations. The Ramones thought quite differently. In early 1974, the band went to Matthews’s NYC factory, became enamored by the 4 x 10?, and took home the only two available.

Ramones producer Daniel Rey acquired this amp directly from Cummings, who offered one to Rey and one to a friend, when Cummings was cleaning out lockers at the Ramones’ rehearsal space at S.I.R. (Studios Instrument Rental). Rey recalls that Cummings pulled them out, turned to his friends, and asked: “Do you guys want these?” This amp was displayed as part of the 2016 ‘Hey Ho, Let’s Go: Ramones and the Birth of Punk’ exhibit, first at the Queens Museum in New York and then at the Grammy Museum in Los Angeles. Includes its original cardboard box. This incredible punk rock relic not only helped conceive the Ramones’ trademark sound, but it likewise helped cement the sound of an entire musical genre—a mind-blowing rock n’ roll rarity indelibly linked to the dirty, burgeoning style of early New York punk.