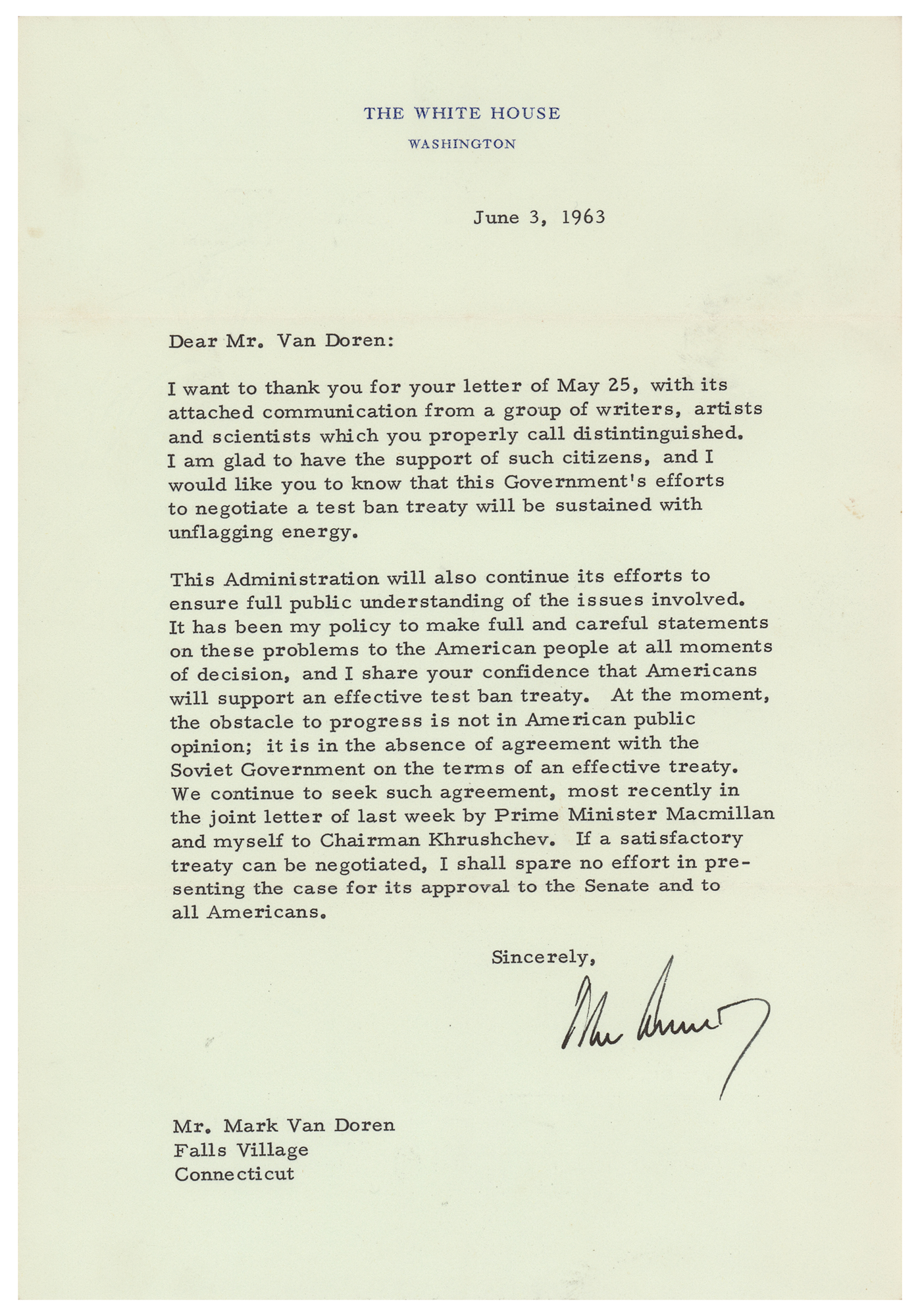 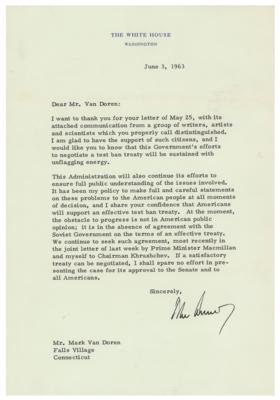 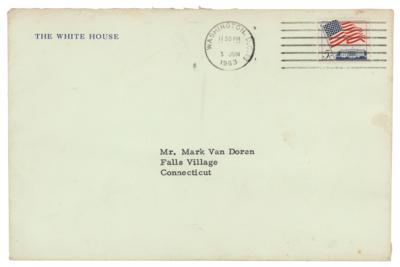 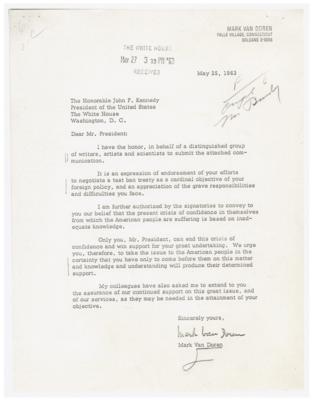 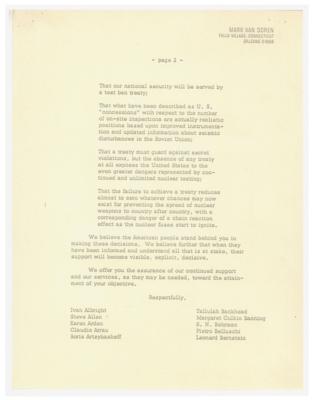 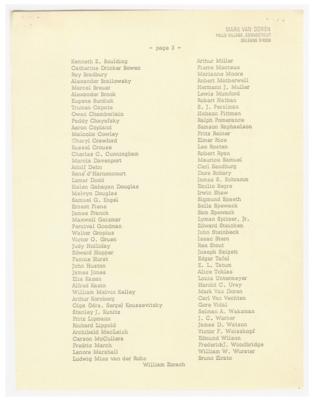 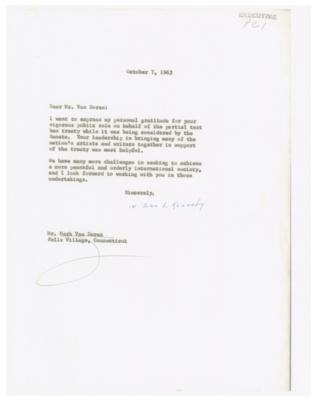 TLS as president signed “John Kennedy,” one page, 7 x 10.25, White House letterhead, June 3, 1963. Letter to Pulitzer Prize-winning poet Mark Van Doren, on the hope of passing his signature legislation: the Nuclear Test Ban Treaty. In part: "I want to thank you for your letter of May 25, with its attached communication from a group of writers, artists and scientists which you properly call distinguished. I am glad to have the support of such citizens, and I would like you to know that this Government's efforts to negotiate a test ban treaty will be sustained with unflagging energy…I share your confidence that Americans will support an effective test ban treaty. At the moment, the obstacle to progress is not in American public opinion; it is the absence of agreement with the Soviet Government on the terms of an effective treaty. We continue to seek such agreement, most recently in the joint letter of last week by Prime Minister Macmillan and myself to Chairman Khrushchev. If a satisfactory treaty can be negotiated, I shall spare no effort in presenting the case for its approval to the Senate and to all Americans." Housed in a handsome custom-made quarter morocco case with marbled boards, and includes the original mailing envelope, photocopy of Van Doren's letter to Kennedy, and a packet of background research with copies of related documents. In fine condition. Accompanied by the original mailing envelope.

The terrifying Cuban Missile Crisis of 1962, an event that brought the United States and the Soviet Union close to the brink, renewed public concern over the real danger of nuclear war. The crisis increased interest on both sides in making progress on a test ban treaty. On May 25, 1963, Van Doren had the privilege of submitting to the president a letter imploring the continued negotiation and passage of the treaty, signed off on by dozens of significant Americans from many fields: among them musicians Leonard Bernstein and Aaron Copland; authors Arthur Miller and John Steinbeck; filmmakers Eliza Kazan and John Huston; artists Edward Hopper and Robert Motherwell; Nobel Prize-winnings scientists Owen Chamberlain and James Watson; and dozens more.

The present letter is JFK's response to Van Doren. It is noteworthy that in it, Kennedy includes Khrushchev’s name; historically, he generally just referred to him as the 'Chairman' in the very few letters that make reference to him. The poet might read this as Kennedy's acknowledgment of a shared humanity—recognizing Khrushchev as a person, not just as an office—as he sought to deter the destruction of humankind.

Seven days after this letter, President Kennedy delivered a commencement address at American University that would be judged one of the greatest American speeches of the 20th century. He announced that he would soon travel to Moscow to meet with Khrushchev and Macmillan to begin discussions toward a test ban treaty. The address marked a dramatic change in US foreign policy, from one focused upon preparation for possible nuclear war to one embarked on the potential for a test ban treaty and improved US-Soviet relations. On June 20, the first step was achieved when the United States and the Soviet Union reached an agreement to install a so-called telephone 'hotline' connecting the Oval Office and the Kremlin. Negotiations continued until July 25th, the treaty was signed outlawing atmospheric, underwater and space testing, and provided for continued underground testing.

Kennedy was worried about achieving Senate approval for the agreement, so he addressed the nation in a televised speech on July 26th. He earned widespread public support for the deal by explaining that the treaty would strengthen national security, lessen the risk and fear of radioactive fallout, reduce world tension by encouraging further dialogue, and prevent acquisition of nuclear weapons by nations not currently possessing them. The Senate went on to approve the treaty by a vote of 80 to 19, and the president completed ratification by signing it into law on October 7, 1963.