In a rare and lengthy handwritten letter, Franklin maneuvers around the issue of American pirates 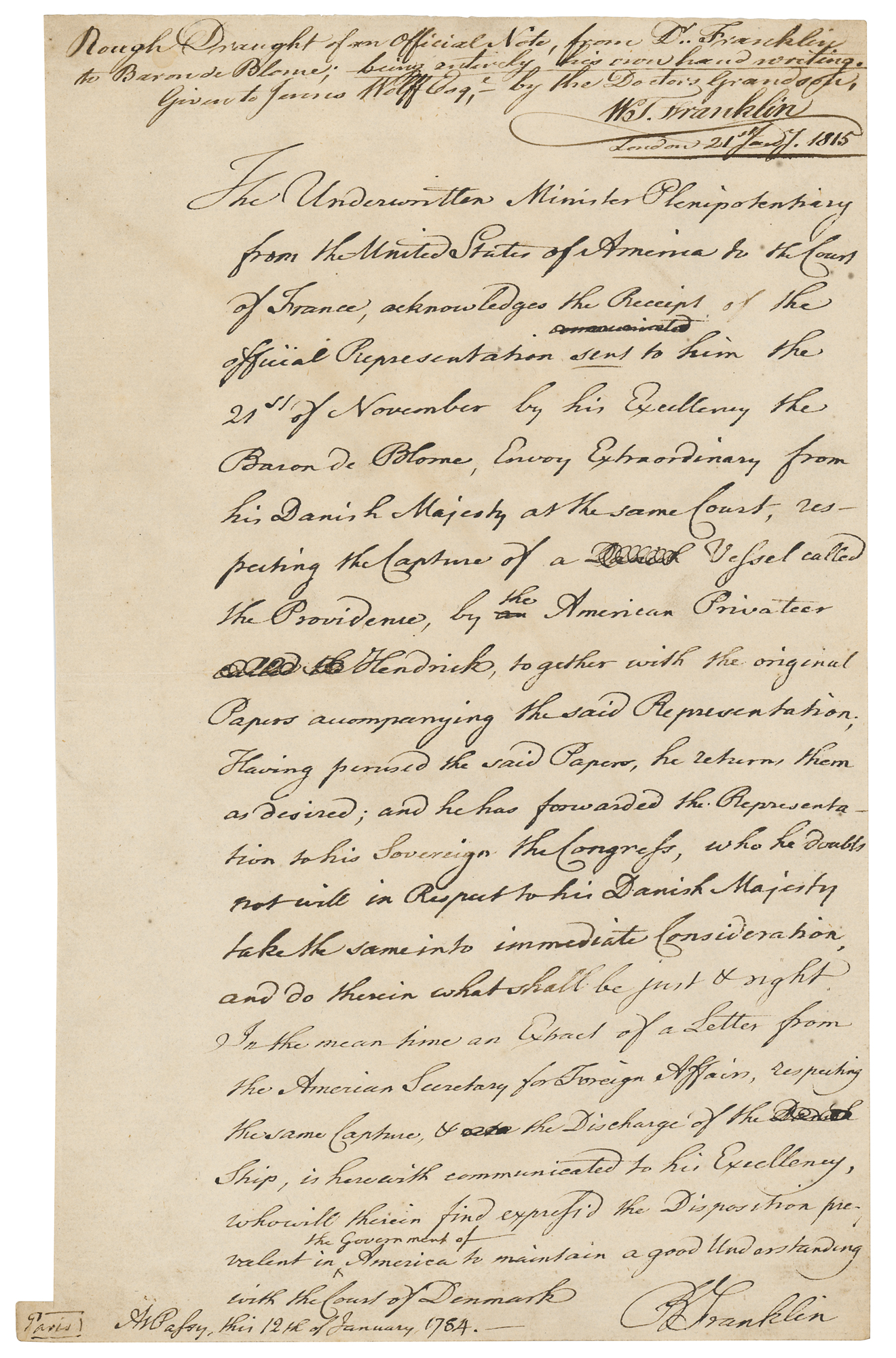 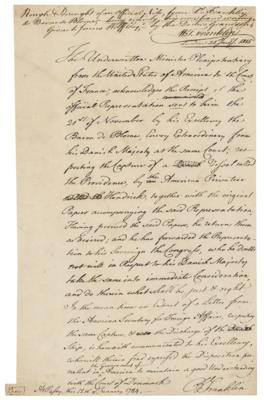 In a rare and lengthy handwritten letter, Franklin maneuvers around the issue of American pirates

Exquisite ALS signed "B. Franklin," one page, 7.5 x 12.5, January 12, 1784. Handwritten rough draft of a letter from Franklin to Baron de Blome. In full: "The Underwritten Minister Plenipotentiary from the United States of America to the Court of France, acknowledges the Receipt of the official presentation sent to him the 21st of November by his Excellency the de Blome, Envoy Extraordinary from his Danish Majesty at the same Court, respecting the capture of a Vesell called the Providence by the American Privateer Hendrick, together with the original papers accompanying the said Representation; Having perused the said papers, he returns them as desired; and he has forwarded the Representation to his Sovereign the Congress, who he doubts not will in respect to his Danish majesty take the same into immediate Consideration and do therein what shall be just & right. In the meantime an Extract of a Letter from the American Secretary for Foreign Affairs respecting the same capture & the discharge of the Ship, is herewith communicated to his Excellency who will therein find expressed the Disposition prevalent in The Government of America to maintain a good understanding with the Court of Denmark."

A note of provenance is written at the top by Franklin's grandson, William Temple Franklin: "Rough draft of an official note from Dr. Franklin to Baron de Blome, being entirely in his own hand writing. Given to James Wolff, Es, by the Doctor's Grandson, W. T. Franklin, London 21st Jany 1815." In exceptionally fine clean condition, with a lightly trimmed left edge.

Franklin is replying to a letter from a Dutch nobleman regarding the capture of his ship by an American privateer. Though he tells the baron that he'll forward the message to Congress who he's sure will "do therein what shall be just & right," he was in fact a major supporter of the acts committed by privateers and hired many himself. Not having a large fleet with which to capture British Navy and Loyalist ships, Franklin and others issued privateering licenses, authorizing "legal piracy," to merchant captains in an effort to claim prizes and prisoners with which to do prisoner exchanges. The ship mentioned in this letter was brought in by one such privateer who asserted that though the ship had Danish papers and was manned by a Danish crew, the cargo and ship were British property. Here, Franklin's diplomacy and writing skills are showcased masterfully in this rare piece of colonial naval history. One of the most beautifully preserved Franklin letters we have ever encountered!