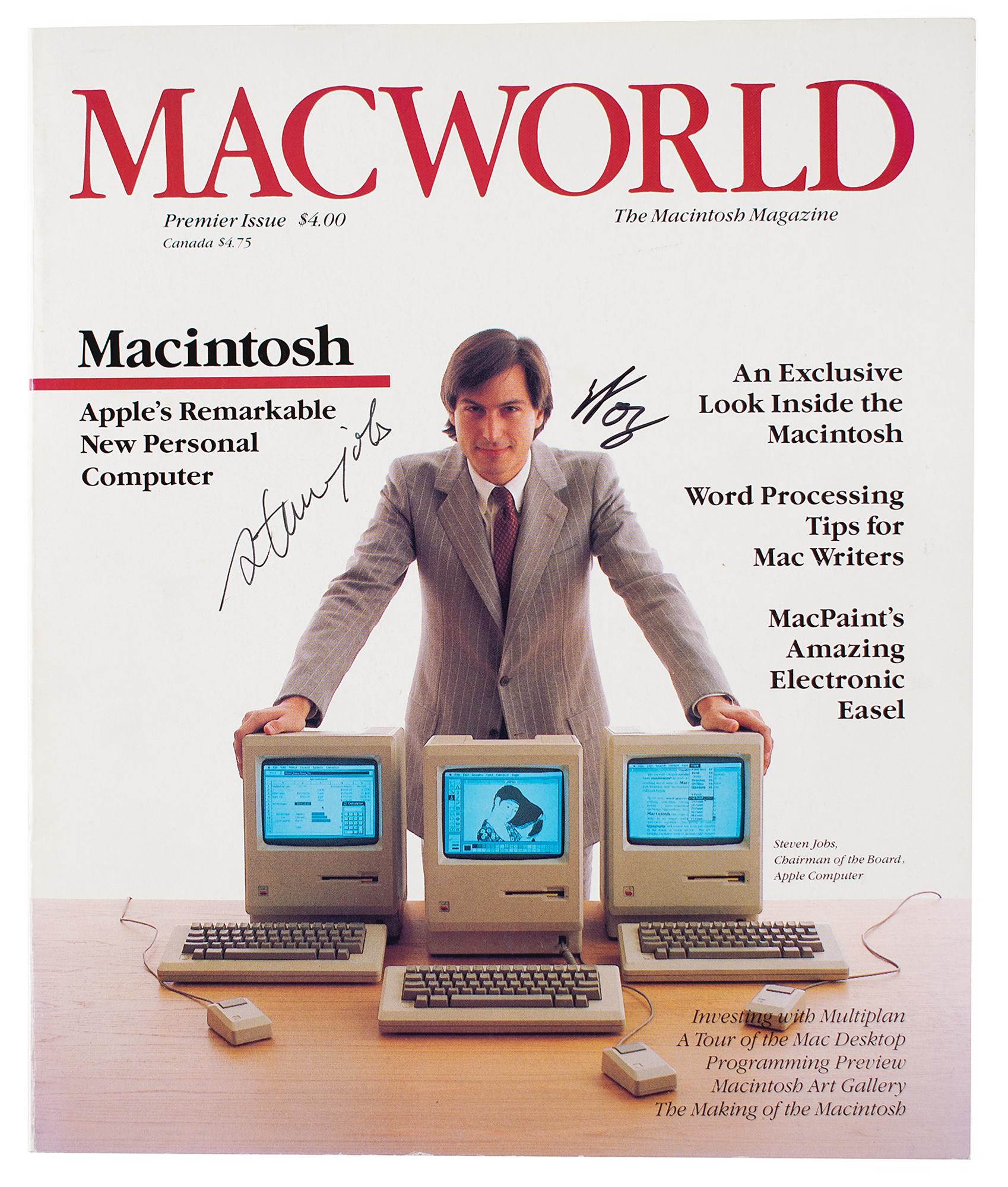 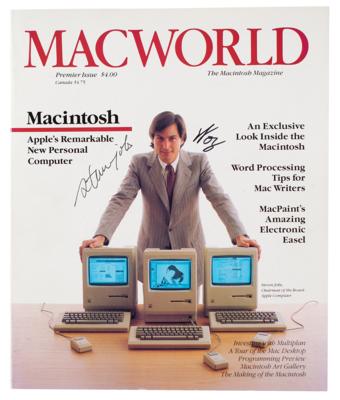 Original issue of Macworld #1 from February 1984, 144 pages, 9 x 10.75, signed and inscribed on the front cover in black felt tip by Apple co-founders Steve Jobs ("steve jobs") and Steve Wozniak ("Woz"). The classic cover depicts Jobs as Apple Computer's chairman of the board, posing with a trio of Macintosh computers upon their introduction to the world. In fine condition. Accompanied by a full letter of authenticity from PSA/DNA.

Introduced in February 1984, Macworld magazine became the most popular Macintosh-focused magazine in North America; the premier issue is scarce and desirable in its own right. This rare, signed example originates from the collection of a senior product marketing manager for QuickTime technology at Apple’s corporate office in Cupertino, CA, from 1992-2000. He writes: "Working as a product marketing manager at Apple was a high-profile job that I had never experienced professionally. I traveled all over the world and gave talks and presentations to large and small audiences as well as met with many software and hardware developers, musicians, celebrities, and Apple fans. Needless to say I met quite a few very interesting people.

Fast forward a year later… 1997… Steve Job’s assistant called me and told me Steve wanted to learn the QuickTime VR technology. (QuickTime VR was a part of QuickTime that was a photographic-based 360 image technology that paved the way for today’s 360 imagery used all over the Web.) I was to go to his office and meet with him one-on-one to demonstrate that technology.

That meeting went as well as it could (I’ll spare you the details!) and at the end of the meeting Steve said, 'This is really cool!' From that day on he invited me to many meetings (many of which I really didn’t need to be in) and he also used QuickTime VR in many of Apple's product announcement events. It was somewhat of a relief that he liked the technology that I was marketing.

A few months later in 1997 Steve was autographing employees' '5 Year Awards.' These are plaques given out for 5 years of working at Apple. Jobs had just become the official CEO of Apple and was signing these awards.

I took my plaque along with this magazine up to his office. I thought, 'Maybe he’ll autograph it.' After all, he owed me a favor for showing him how to use QuickTime VR, right? Yeah that’s it! I asked his secretary to ask if he'd sign the magazine as well as my award and she said, 'No way, he doesn’t like to sign anything!' I said, 'Please? Just see if he will.' She said, 'OK I'll ask.'

Two days later she called and said, 'Get up here! He signed your magazine and I don't want it to walk away!'

Not only did he sign my 5-year award but also my premier issue of Macworld.

A few years later I attended Macworld San Francisco. It was the largest Apple trade-show. I knew Steve Wozniak would be speaking there so I brought my magazine with me so I could ask if he’d sign it. If he did I’d have signatures of both founders of Apple on this iconic item! I had met Woz before and he’s a very nice person so I was feeling hopeful. By the time I got to his talk it was over with, darn it! I noticed he was still on stage chatting with people so I walked up and he asked what I had. I asked him if he’d sign it. He smiled and said, 'Sure! Let’s make this complete!'"