Important patriotic handwritten letter from President Jefferson to John Stark, praising the "victories of Bennington, the first link in that chain of successes which issued in the surrender at Saratoga" 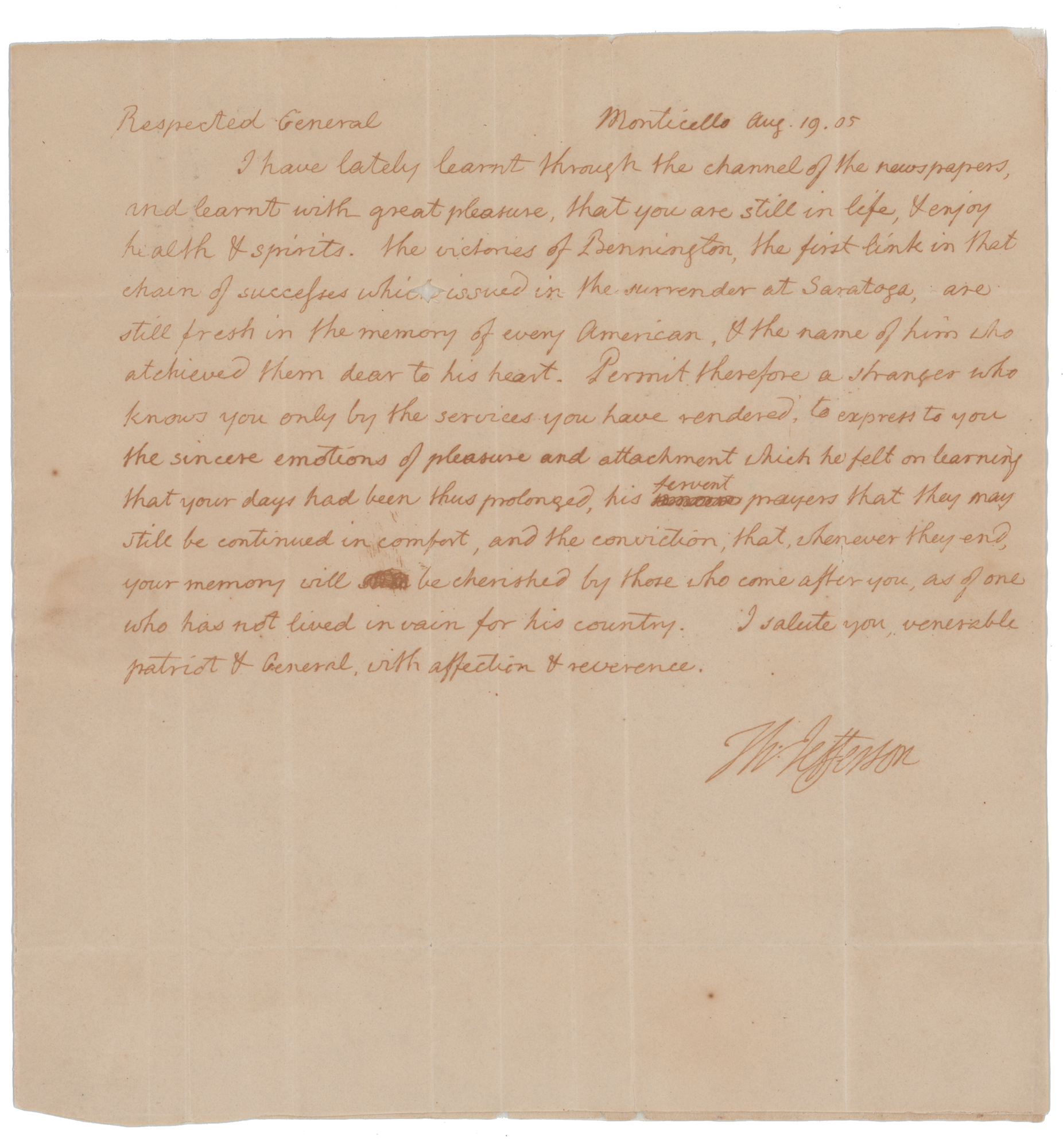 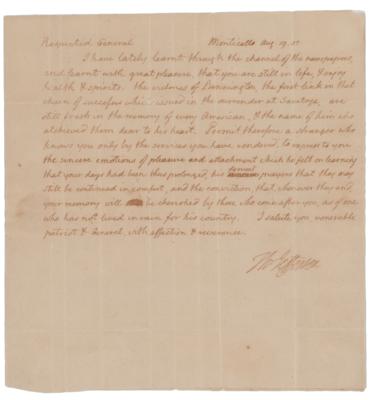 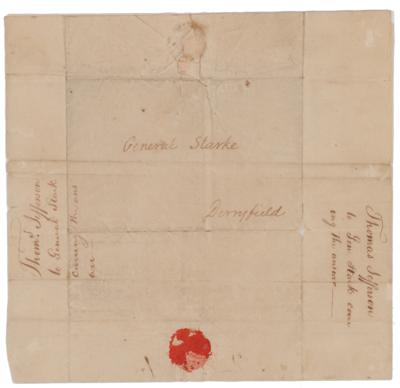 Important patriotic handwritten letter from President Jefferson to John Stark, praising the "victories of Bennington, the first link in that chain of successes which issued in the surrender at Saratoga"

Superlative ALS as president, signed “Th: Jefferson,” one page, 7.75 x 8, August 19, 1805. Handwritten letter from Monticello to General John Stark, in full: "I have lately learnt through the channel of the newspapers, and learnt with great pleasure, that you are still in life, & enjoy health & spirits. The victories of Bennington, the first link in that chain of successes which issued in the surrender at Saratoga, are still fresh in the memory of every American, & the name of him who atchieved [sic] them dear to his heart. Permit therefore a stranger who knows you only by the services you have rendered, to express to you the sincere emotions of pleasure and attachment which he felt on learning that your days had been thus prolonged, his fervent prayers that they may still be continued in comfort, and the conviction, that, whenever they end, your memory will be cherished by those who come after you, as of one who has not lived in vain for his country. I salute you, venerable patriot & General, with affection & reverence." Addressed on the integral leaf in Jefferson's hand to "General Starke, Derryfield." In fine condition, with trimmed edges, and complete silking to the reverse. Accompanied by an engraved portrait bearing a facsimile signature.

Remembered as the 'Hero of Bennington' for his exemplary service at the Battle of Bennington on August 16, 1777, Stark led a group of New England militiamen in the defeat of a detachment of General John Burgoyne's army. The victory was a major strategic success for the beleaguered patriot cause, galvanizing support for the independence movement. It is considered one of the early turning points in the American Revolution. After the war, Stark retired from public life to his farm in New Hampshire, where he lived out his days in relative obscurity—even Jefferson, the patriot philosopher then serving as America's president, seemed surprised to learn that Stark was alive.

In his reply to Jefferson—not sent until November, 'owing to the imbecility inseparably connected with the wane of life' in his 77th year—Stark confessed: 'I once began to think that the labors of the revolution were in vain, and that I should live to see the system restored that I had assisted in destroying. But my fears are at an end, & I am now calmly preparing to meet the unerring fate of man, but with the satisfactorily reflection that I leave a numerous progeny in a land highly favored by nature, and under a government whose principles & views I believe to be correct & just.' A contemporary true copy of Stark's reply is included.