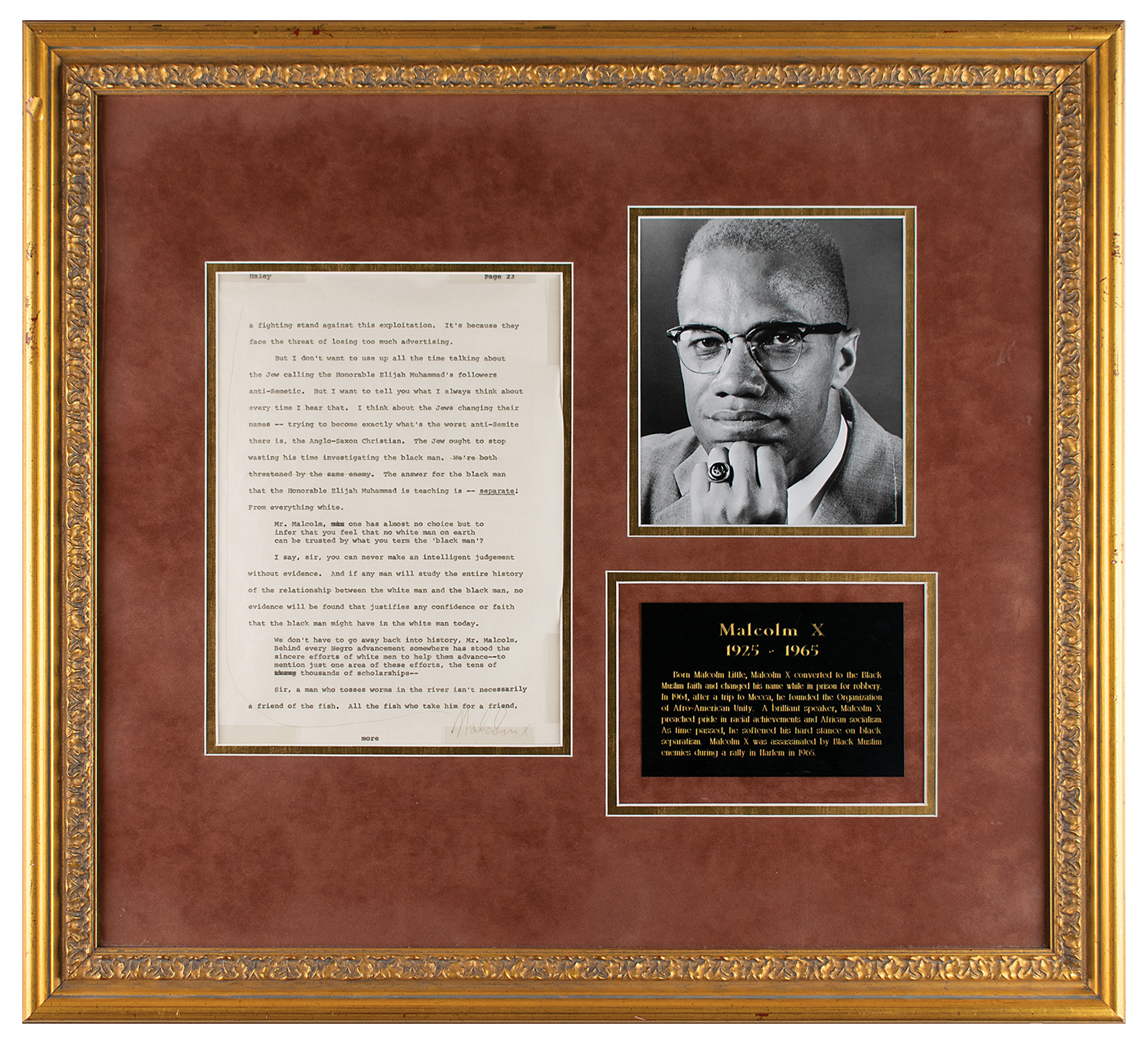 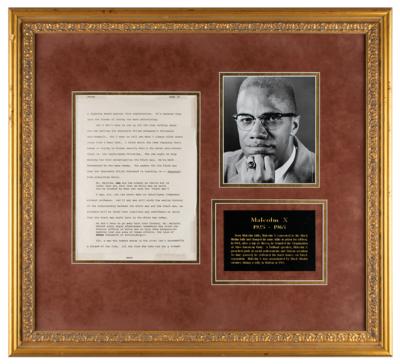 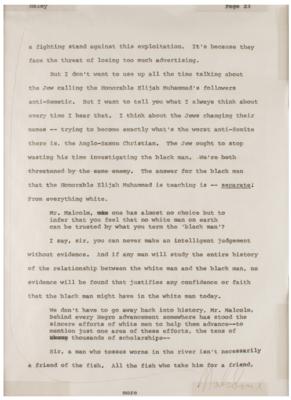 Page 23 from the original typescript of Alex Haley’s 1963 interview of Malcolm X for Playboy magazine, one onionskin page, 8 x 10.75, signed "Malcolm X" in the bottom margin (with a marginal line indicating his approval of the contents). In full: “But I don’t want to use up all the time talking about the Jew calling the Honorable Elijah Muhammad’s followers anti-Semitic. But I want to tell you what I always think about every time I hear that. I think about the Jews changing their names—trying to become exactly what’s the worst anti-Semite there is, the Anglo-Saxon Christian. The Jew ought to stop wasting his time investigating the black man. We’re both threatened by the same enemy. The answer for the black man that the Honorable Elijah Muhammad is teaching is—separate! From everything white.” Haley next poses the question: “Mr. Malcolm, one has almost no choice but to infer that you feel that no white man on earth can be trusted by what you term the ‘black man’?” Malcolm’s response: “I say, sir, you can never make an intelligent judgment without evidence. And if any man will study the entire history of the relationship between the white man and the black man, no evidence will be found that justifies any confidence or faith that the black man might have in the white man today.” Haley’s followup: “We don’t have to go away back into history, Mr. Malcolm. Behind every Negro advancement somewhere has stood the sincere efforts of white men to help them advance. To mention just one area of these efforts, the tens of thousands of scholarships—.” Interrupting, Malcolm’s partial answer: “Sir, a man who tosses worms in the river isn’t necessarily a friend of the fish. All the fish who take him for a friend…” Malcolm signs his approval at the bottom of the page in pencil, making only one change: the deletion of the phrase “We’re both threatened by the same enemy.” Handsomely double-matted and framed with a portrait and an engraved plaque to an overall size of 25.25 x 23. In fine condition.

Playboy's May 1963 interview with Malcolm X was one of the most famous of Haley’s career, and gave most readers their first in-depth look of Malcolm X’s teachings and personality. Supporters and critics viewed the Muslim minister in very different terms. Admirers saw him as a courageous advocate for the rights of African-Americans and condemned crimes against black Americans; detractors accused him of preaching racism, black supremacy, and violence. Nevertheless, he has been described as one of the greatest and most influential African-American leaders in history. Within a year of granting this interview, with America still gripped by ever-growing racial tension, the once-combative black nationalist Malcolm X had repudiated almost every stance in the interview. He had broken with the Nation of Islam movement, fallen out with its leader, Elijah Muhammad, renounced black supremacy, and embraced racial equality and human rights. He was assassinated in Harlem in 1965.